In Its Fifth Year, VoxFest Brings New Theater to the Hop

The weeklong residency is the first of three summer theater workshops on campus. 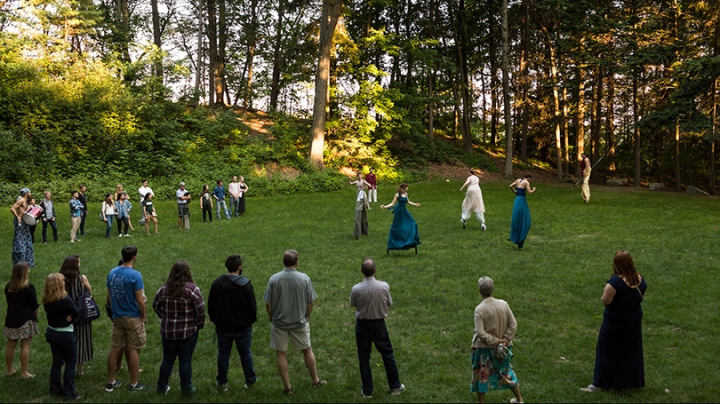 VoxFest—a weeklong theater residency in which alumni work with students and faculty on works in progress—is back on campus for its fifth summer, stirring a rich brew of contemporary and ancient themes.

“We're extremely grateful to have this home at Dartmouth where we can not only workshop our work away from the distractions of our lives, but also take full advantage of the resources here—chief among them the consistently smart and creative students with whom we work,” says VoxFest co-founder Matthew Cohn ’88, an actor and producer based in New York City.

The Cure, says Pasculli, “takes place in a cafe at the edge of the world—someplace like Miami. The cafe serves as a transportation device.” People walk in, sing a song, “and then they are transported either to home or to some sort of limbo space.” What determines which direction they take? Pasculli says that’s being worked out this week as the play continues to be developed.

Walkabout is also using VoxFest to work on a shorter piece, called The Persephone Pageant and based on the Greek myth. For Walkabout member Dana Murphy, creating two different pieces about descent into an underworld captures the mood of our times. “We’ve talked about how it feels like this nation is in a bit of limbo right now,” she says, “in an in-between space, where everyone is upside down. So we are exploring that.”

On Wednesday afternoon, Walkabout actors rehearsed a scene in which Persephone gets abducted by Hades, king of the underworld. They swooped around each other—on stilts. Observing the action, as a three-man Greek chorus (but not on stilts), were Christian Williams ’19, Armando Ortiz ’19, and Owen O’Leary ’19. They’re taking the course “New Plays in Production,” through which students participate in summer drama workshops. When Pasculli asked if O’Leary would like to sing something, he spontaneously obliged with a rendition of On the Street Where You Live, from Lerner and Loewe’s My Fair Lady.

O’Leary, who performed in Dartmouth’s mainstage productions of Chicago and Urinetown, likes the challenge of making theater on the spot because it sharpens his improvisational skills.

“My experience in theater at Dartmouth has been in plays that are published and established, whereas in VoxFest, the work is being devised,” says O’Leary. “Working with Walkabout, training with them, and learning about their process has been a brand new experience for me.”

Williams, a film studies major with a minor in theater, says VoxFest is teaching him to use his body on stage.

“What Dartmouth is about is learning to think in new ways,” he says. “There’s been a lot of physicality with Walkabout that I have never experienced before. I can get bogged down in words and dialogue and speeches, but a lot of acting is physical and visual, so learning different techniques to feel comfortable and to make other people comfortable is hugely important.”

“There are a lot of summer theater festivals in New England, but they’ve become more and more commercial over the years,” says Mulley. “I like that VoxFest remains so scrappy and experimental, and I think it lets the students know that there are so many different ways to make theater, to make a life as a theater artist.”

VoxFest stages its productions, which are free and open to the public, in the 180-seat Warner Bentley Theater at the Hopkins Center for the Arts.  A full schedule can be found on the center's website. Support comes from the Office of the President, the Office of the Provost, and the offices of alumni relations, the dean of faculty, and the Monahon Family Fund, among other donors.

After the curtain falls on VoxFest, it will rise again on two other summer theater workshops. From July 28-30, the Frost and Dodd Student Play Festival presents prize-winning works by three student playwrights. Everything Falls Apart, by Jordyn Fitch ’20, tells the story of a beleaguered young man whose visit from a friend takes an absurdist turn. Craters, or the Making of the Making of the Moon Landing, by Elise Wien ’17, is about filmmakers who document the Apollo 11 moon landing. They will each get staged readings. If It Isn’t You, by Tess McGuiness ’18, will be a full production directed by Associate Professor of Theater Jamie Horton. The heroine, Sophie, who falls in love with a man named Charlie, learns how to recover from losing herself in that relationship.

And in August, the New York Theatre Workshop, which recently celebrated a 25-year partnership with Dartmouth at a gala in New York City, presents works in progress by some of today’s most provocative playwrights and producers.