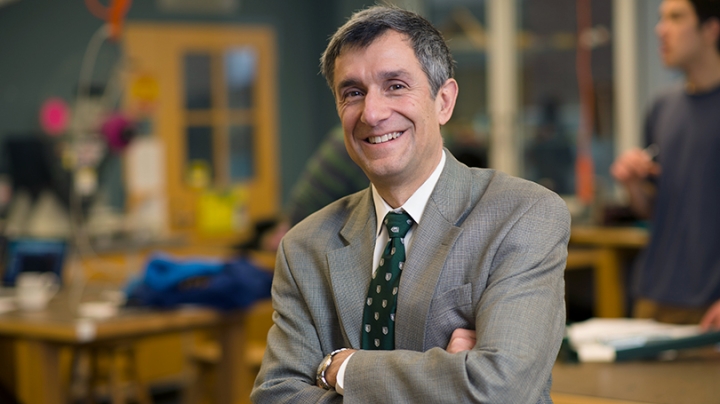 Joseph Helble has been appointed to a fourth term as dean of Thayer School of Engineering. (Photo by John Sherman)
7/03/2017
Body

Joseph Helble has been appointed to a fourth four-year term as dean of Thayer School of Engineering, Provost Carolyn Dever announced today.

Helble, a professor of engineering, is a recognized leader in his field, says Dever.

“Joe has brought a diversity of ideas and people to Thayer and he has brought Thayer national prominence while making the case that educating a diverse student body makes for a better learning environment and better educational outcomes. He is a kind, inspirational leader and a strong presence at Thayer,” says Dever. “And, in a time of uncertainty about immigration policy, Joe has been an advocate for the importance of educating international students in the U.S.”

During Helble’s tenure, Thayer has seen a sharp increase in the percentage of engineering graduates who are women. In 2016, Dartmouth granted 52 percent of its undergraduate engineering degrees to women, making it the first national research university to award more bachelor’s degrees in engineering to women than to men. The national average remains just under 20 percent.

“It’s been a privilege to work with Thayer’s extraordinary community of scholars and educators and with students who are inspiring in their belief that developing technology to address the world’s most pressing problems truly is a grand challenge. I am looking forward to the next four years and the opportunity to help Thayer continue to build partnerships and programs to prepare students for positions of thoughtful leadership in a technology-driven world.”

With more than 500 students, Thayer offers undergraduate and graduate degrees. It is home to the nation’s first engineering PhD Innovation program, which Helble and the Thayer faculty launched in 2008 to address the growing need for engineers with high-level technical and entrepreneurial expertise.

Under Helble’s leadership, Thayer has seen research funding grow to record levels and faculty have been added. In addition, Helble says, “Thayer nurtures and encourages our faculty entrepreneurs. One third of our tenure-track faculty have started a company, giving Thayer the highest percentage of faculty-entrepreneurs among U.S. engineering schools.”

Education in the liberal arts is an important part of an engineering education, says Helble, noting that engineering students at Dartmouth develop more than just technical proficiency.

“We give students flexibility and choice, exposing them to the liberal arts and to all of the engineering disciplines without regard for disciplinary boundaries,” he says. “This encourages our students to see engineering as a collaborative mindset and a collection of tools to solve real-world challenges.”

Thayer is planning an expansion that will build on its distinctive approach to engineering and respond to increasing demand from undergraduates, both engineering majors and non-majors. The expansion, which includes construction of a new building, will offer all undergraduates an opportunity to explore technology, generate more research opportunities for all students, and increase the scope of Thayer’s research and entrepreneurial efforts. The expansion will include an increase in the size of the faculty, with emphasis on the those working on challenges in the areas of energy and engineering-in-medicine.

In 2014, Helble and Thayer colleagues John Collier ’72, Thayer ’77, Robert Graves, and Charles Hutchinson received the National Academy of Engineering’s Bernard M. Gordon Prize for Innovation in Engineering and Technology Education, the largest educational engineering prize in the nation, for the design and implementation of the Engineering Entrepreneurship Program, which integrates entrepreneurship into all levels of the engineering curriculum.

Prior to his arrival at Dartmouth in 2005, Helble was the Roger Revelle Fellow of the American Association for the Advancement of Science (AAAS) and spent a year working on technology and environmental policy issues in the office of then-U.S. Sen. Joseph Lieberman.

Helble was a professor of chemical engineering and chair of the Department of Chemical Engineering at the University of Connecticut, where he received the inaugural Environmental Faculty Leadership Award. Helble has led research in areas of air pollution, carbon dioxide capture, aerosol science, and nanoscale materials production. He previously worked as a research scientist and manager at Physical Sciences Inc. in Andover, Mass., and as a science and policy fellow of the AAAS at the Environmental Protection Agency.

Helble has served on several EPA Science Advisory Board panels, as a member of the editorial boards of the scientific journals Environmental Engineering Science and Fuel Processing Technology, and is presently a member of the Institute of Electrical and Electronics Engineers’ Spectrum Editorial Advisory Board and the Montshire Museum Board of Trustees. He is also the current chair of the public policy committee of the American Society for Engineering Education U.S. Engineering Deans Council. Helble is the author of more than 100 journal articles and holds three U.S. patents related to the production of nanoscale powders. He received a National Science Foundation CAREER award, the organization’s most prestigious award in support of junior faculty.