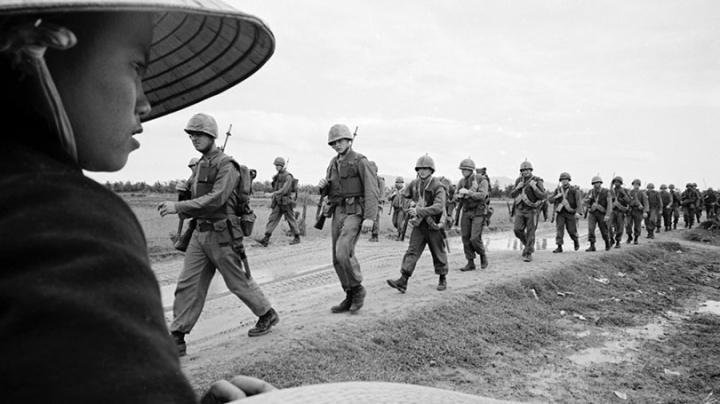 Filmmakers Ken Burns and Lynn Novick are coming to the Hopkins Center for the Arts July 13 to present an evening of highlights from their forthcoming PBS series The Vietnam War, followed by a discussion with some of the project participants, including Associate Professor of History Edward Miller.

Burns says that Miller, whose academic focus is on Vietnamese history from the war era, brought important insights to the filmmakers as they strove to tell the story of the war through first-person accounts from all sides. The final project includes testimony from nearly 100 witnesses, Americans and Vietnamese, soldiers and civilians.

“What Ed permitted us to do is come to terms with a lot of the different perspectives that we Americans don’t normally include in our thinking about Vietnam, and we’re really grateful for his extraordinary scholarship and his willingness to help us at every step along the way,” he says.

Novick, who conducted most of the interviews in Vietnam and the U.S., says Miller helped the filmmakers think about the war as more than an American event.

“We were excited to know that there is a new generation of scholars of Vietnam history and the Vietnam War who speak Vietnamese, who’ve been to Vietnam, who understand the history and the culture, and have done primary research there. Ed Miller is at the forefront of that,” says Novick. “So we were incredibly fortunate to work with him on this project. He was one of our most valuable advisers from day one helping us understand the complexity of the narrative that we were trying to tell.”

The discussion following the screening will include Burns, Novick, Miller, and the film’s senior producer Sarah Botstein, as well two witnesses featured in the film, local Army veteran Mike Heaney and a Vietnamese-American woman, Mai Elliott, whose family was divided by the war. The event runs from 7 to 9 p.m. Thursday, July 13, in the Hopkins Center’s Spaulding Auditorium. The event, which is sold out, is co-sponsored by New Hampshire Public Television. The 10-part, 18-hour documentary premieres on PBS Sept. 17.

Earlier in the day Thursday, Burns, Novick, Botstein, and Miller will also join a discussion with leading Vietnam historians at a conference hosted at the College by Miller and Columbia University history professor Lien-Hang Nguyen. The three-day conference will bring together scholars who are contributing chapters to the forthcoming book, The Cambridge History of the Vietnam War Vol. 1, edited by Miller and Nguyen.

Burns, Novick, and Botstein say they are looking forward to sharing some scenes from their film and discussing the history and meaning of the Vietnam War with such an accomplished group of Vietnam scholars.

“We’re interested in the kind of discussion that follows and we hope that by aggregating the important scholarship that has gone on in the last 40 years, we’ll be able to bring it to a broad national audience across the country,” Burns says.

The time is ripe to revisit some of the unresolved questions of that era, he says, because many of the issues that divide our country today have their roots in the Vietnam War era.

“If it is possible to unpack what happened in that watershed event, it might be possible to understand a fundamental truth not just of war, but of human activity—that it’s possible for one truth and another to coexist. If you extend to the other the acknowledgment that their viewpoint is equally as valid as yours, then all of a sudden you’re not shouting at somebody, you’re not talking at them, you’re talking with them, and you can have the kind of courageous conversations that are necessary for healing,” Burns says.

“If we can’t have a courageous conversation, then we can’t do the kind of repairs that I think everybody, regardless of their political orientation, hopes for,” he says.

The Vietnam War, produced by Burns’ production company, Florentine Films, includes digitally remastered archival footage, photographs taken by some of the most celebrated photojournalists of the 20th century, historic television broadcasts, home movies, and audio recordings from inside the Kennedy, Johnson, and Nixon administrations. The film also includes original music written and recorded by Academy Award-winning composers Trent Reznor and Atticus Ross, new music arranged and performed by cellist Yo-Yo Ma and The Silk Road Ensemble, and more than 120 popular songs from the era.

The Vietnam War rounds out Florentine Films’ trilogy on American wars that began with Burns’ landmark series, The Civil War (1990), followed by Burns and Novick’s acclaimed seven-part series about World War II, The War (2007). Burns has a longstanding relationship with the Hopkins Center film office, offering a number of screenings of his films over the years and serving on the center’s board of overseers. 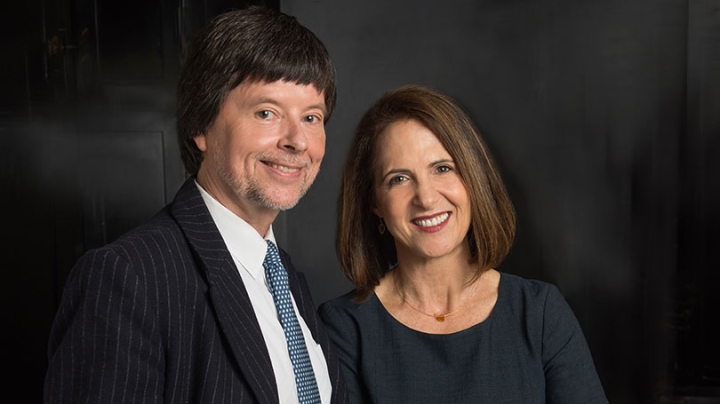 Filmmakers Ken Burns and Lynn Novick, co-directors of the PBS series The Vietnam War, will screen highlights from the film at the Hopkins Center for the Arts on Thursday, July 13. (Photo by Stephanie Berger)
Written by
Bill Platt
Share this
FacebookTwitterEmail
In the News