The associate dean for global health will direct global initiatives in the Office of the Provost. 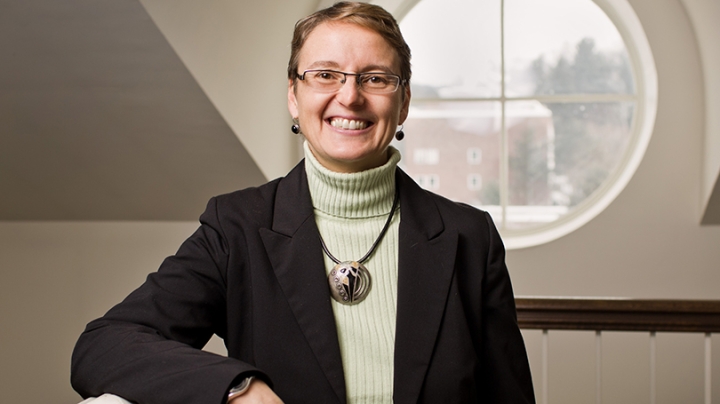 Lisa V. Adams, MED ’90, the associate dean for global health and associate professor of medicine at the Geisel School of Medicine, has been appointed to oversee global initiatives in the office of Provost Carolyn Dever.

In the part-time position as director of global initiatives, Adams, who is a physician, will manage global strategy for the College, including work with the Matariki Network of Universities, an international consortium of seven institutions, including Dartmouth. She will also work on the College’s immigration working group, which began meeting in January, to share information and resources in the face of changing federal policies regarding immigration, and on international agreements for research partnerships between the Dartmouth and other universities.

“Lisa has a strong background in international research and medicine and is a welcome addition to my team,” says Dever. “Her years of leadership in the field of global health will be invaluable in deepening Dartmouth’s engagement in this vital work.”

Adams’ career spans more than two decades, during which she has focused primarily on the prevention of tuberculosis and the care of those suffering from the disease. She has been a leading co-investigator on several research trials on TB and HIV, including development of the new TB vaccine, Dar901, through the DarDar Programs, a collaboration between Dartmouth and Muhimbili University of Health and Allied Sciences in Dar es Salaam, Tanzania.

Lisa V. Adams works with doctors in Kigali, Rwanda, as part of that nation's Human Resources for Health Program. (Photo by Lars Blackmore)

“Supporting the broader portfolio of Dartmouth’s international engagement feels like the perfect next step in my global work. I am delighted and honored to support the institution and the provost in this important endeavor and explore new directions to firmly establish Dartmouth as a leader in this space,” Adams says.

Adams has become a leader in the global health field, having recently assumed executive positions with the Consortium of Universities for Global Health and the Union Against Tuberculosis and Lung Disease. She is Dartmouth’s lead for the multi-institutional Rwandan Human Resources for Health Program, and spent six months in Kigali launching the program as part of the core team and working as clinical faculty. She is currently the principal investigator for a research study in Swaziland to improve delivery of TB care to children and to those living with HIV.

Previously, she worked in Kosovo, where she spent several years as the medical and country director for Doctors of the World USA, and in Tanzania, providing care to Burundian refugees with the International Rescue Committee.

At Dartmouth, Adams helped to found the Global Health Initiative at the John Sloan Dickey Center for International Understanding, where she continues as the faculty lead. She also established Geisel’s Center for Health Equity, which works to address health disparities locally and globally. Much of her research involves working as part of interdisciplinary teams with colleagues from the anthropology, government, and sociology departments and from The Dartmouth Institute for Health Policy and Clinical Practice.

“I thoroughly enjoy all the cross-cutting programs and research I am involved in. I feel as at home teaching undergraduates in my geography department course as I do teaching medical students at Geisel. With collaborations spanning the institution, I am fortunate to live the ‘One-Dartmouth’ experience,” she says.