President Hanlon Is Chair of the Matariki Network

Dartmouth will host leaders from member universities in October. 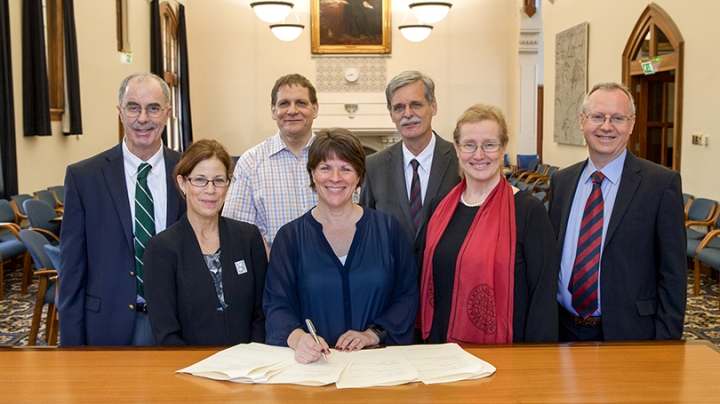 President Phil Hanlon ’77 on July 1 became chair of the Matariki Network of Universities, the seven-member consortium of leading international institutions of higher learning (named for the Maori word for the Pleiades, or Seven Sisters, constellation of stars) that Dartmouth co-founded in 2010.

The role of chair is a two-year position that rotates among the leaders of the network’s membership. President Hanlon succeeds Eva Åkesson, vice chancellor of Uppsala University in Sweden.

“I’m grateful to Vice Chancellor Åkesson for her leadership,” says Hanlon. “As chair, I look forward to working with our Matariki partners to build on the spirit of international collaboration and exchange that the network has fostered since its inception.”

Matariki’s mission is “to build upon the collective strengths of its member institutions to develop international excellence in research and education and to promote social responsibility locally and globally,” according to its website. In addition to Dartmouth, the consortium includes Queens University in Canada, Durham University in England, Uppsala University in Sweden, the University of Tübingen in Germany, the University of Western Australia, and the University of Otago in New Zealand. The network hosts colloquia on a variety of interdisciplinary themes, from brain research and quantum science to cybersecurity and digital humanities, and facilitates scholar and student exchanges and collaborations.

With the University of Otago and the University of Western Australia, Dartmouth has played a lead role in developing the Matariki Indigenous Student Mobility Programme, which brings together Native students from each institution for a two-week academic program hosted each year at one of the participating universities. Dartmouth will be hosting the next program in June 2018.

As chair, Hanlon will head Matariki’s executive board, which includes leaders from all seven of the member institutions. The board is responsible for setting the network’s strategic direction. The board’s next business meeting will take place at Dartmouth Oct. 23-24. At that meeting the board will review the network’s program of activities and set priorities for the next two years. Following the meeting, the network will be holding a joint alumni event in Boston.