Engineering and a love of sports propelled the two researchers. 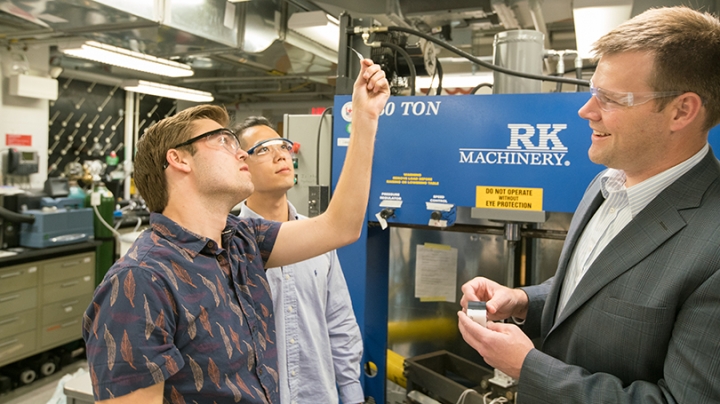 As engineering students, David Cook (left) and Hayden Chun examine a sample of a polyethylene-based material under the supervision of Professor Douglas Van Citters. (Photo by Eli Burakian ’00)
7/17/2017
Body

Two veteran Dartmouth Ski Patrol members combined their love of the sport with their engineering skills to try to help people who’ve been injured on the slopes. In the course of their research, they found a promising path for doing just that, and perhaps much more.

In a lab at Thayer School of Engineering, Hayden Chun ’16, Thayer ’17, and David Cook ’16, Thayer ’17, were searching for a new and better material to cushion and extend the life of replacement joints for injured skiers and others who had developed arthritis.

The two created an electrically charged compound whose conductivity decreased as they stretched the material. “In a sense, we could now detect deformation based on whether or not it is able to continue to be conductive. The same would apply to its eventual degradation,” says Chun.

This discovery opened the door to an array of potential new applications.

“If we could make high-tensile-strength fabrics from this material, such as a rope or in body armor, it could give us a means of detecting when it is starting to degrade before it actually breaks. This could have profound implications for those using it,” Chun says.

For the previous two years, they had been investigating polyethylene biomaterials. Polyethylene is the high-strength, low-friction, low-wear plastic commonly used as a bearing material in both medical implants and industrial applications.

“Polyethylene does well in the short term as a bearing material, but can often experience degradation and failure in the long term,” says Cook. “We thought that we might be able to use some sort of carbon additive such as graphene to make it stronger and extend its life.”

Graphene consists of a thin layer of pure carbon, just one atom thick—the thinnest and lightest compound known and the best known conductor of electricity. Chun, knew a lot about graphene, having worked with it at the U.S. Naval Research Laboratory in Washington, D.C.

Cook and Chun proceeded to add graphene to the mix, and that is when they discovered that their new compound was retaining the electrical properties of the graphene.

The pursuit of the new material—now at the “patent applied for” stage—began more than two years ago, when Cook and Chun approached Douglas Van Citters, an associate professor of engineering at Thayer. Van Citters works with orthopedic biomaterials and joint replacement technology.

Van Citters agreed to be their adviser and, with his graduate students, supervised their research. Over the years, they worked on this project as a team, and eventually developed it into separate honors theses for Chun and Cook. They both completed their bachelor of engineering degrees this spring after receiving their bachelor of arts degrees in the previous year.

“On their own, they had developed a research project and then wrote up the proposal. These were two awesome undergraduates,” says Van Citters. “I shepherded them to Dartmouth’s Office of Undergraduate Advising and Research in search of funding.”

“Dartmouth gave us an initial funding grant to work on this fulltime for an entire term,” says Cook, a biomedical engineering graduate from Minneapolis who has his sights set on medical school.

“The combination of the two materials—the polyethylene and the graphene—in a composite had not yet been extensively investigated in the research community, so we jumped on the project,” says Chun, from Fairfax, Va., who majored in engineering sciences. “By exploring this material and characterizing it, we really wanted to see where it would take us.

“Being able to explore this from a holistic sense, by understanding the properties of this material and not limiting ourselves to orthopedics, we might discover how many other uses it might have,” he says.

Even so, the material may still have a role in orthopedics. “I could imagine designing a knee implant where the plastic is able to understand when it is wearing out,” says Cook. “The deeper we get into it, the more potential applications might emerge.”