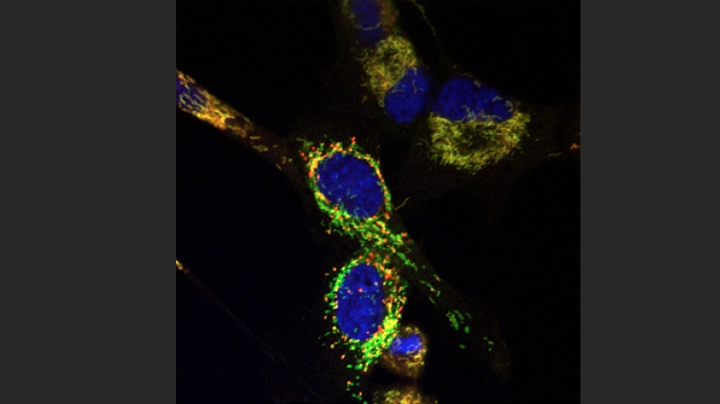 Brain tumor cells after treatment with Y100, which causes depolarization of mitochondria and the appearance of mitochondrial “hot spots” (in red). (Image courtesy of Professor Yolanda Sanchez’s lab)
7/27/2017
Body

This strategy capitalizes on the fact that processes that allow a cell to form a tumor, such as loss or mutation of the tumor suppressor NF1, also expose vulnerabilities in the tumor cell that are absent in normal cells. These vulnerabilities are known as the “Achilles heel” of cancer cells. Although much is known about the mutations that cause a cell to become malignant, little is known about the vulnerabilities of cells with these mutations. The team has published new findings on this Achilles heel found in cells that have been rewired by NF1 loss.

Mutation of the tumor suppressor, NF1, or loss of the NF1 protein is a possible cause of aggressive neurological cancers, including glioblastoma (GBM) and has also been observed in lung adenocarcinoma and ovarian cancer, among other sporadic cancers.

Led by Yolanda Sanchez, the associate director for Basic Sciences at Norris Cotton Cancer Center and associate professor of molecular and systems biology at the Geisel School of Medicine, a multi-institutional research team has developed and conducted a novel synthetic lethality screen to discover molecules that target genetically modified yeast lacking NF1. Yeast is uniquely amenable to high throughput drug screening because the pathways are conserved. The team was therefore able to screen thousands of drug-like compounds for ones that would kill the NF1-deficient cells while sparing the wild-type (normal) cells, and sorted out the lead compounds that were successful in doing so.