Undergraduate Is Published in a Top Military Journal

A paper by Charlotte Blatt ’18 is published in the U.S. Army War College quarterly. 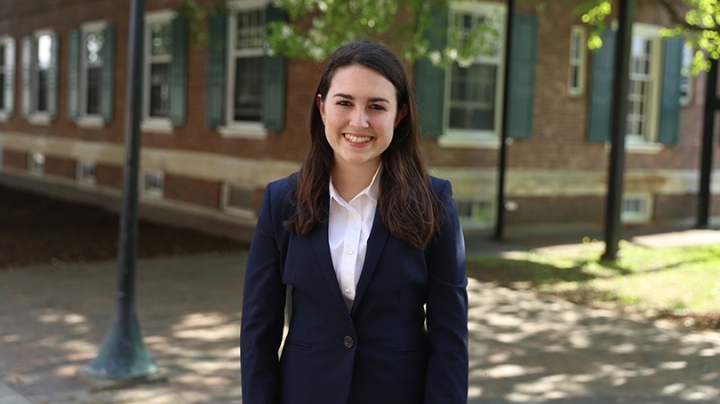 Parameters, the top peer-reviewed journal of the U.S. Army War College, published a paper Charlotte Blatt ’18 wrote during her sophomore summer. (Photo courtesy of the Nelson A. Rockefeller Center for Public Policy)
7/24/2017
Body

An analysis of military strategy in the Iraq war by Charlotte Blatt ’18, which started as a paper for Assistant Professor Jeffrey Friedman, has been published in Parameters, the top peer-reviewed journal of the U.S. Army War College.

“Charlotte was able to publish a paper that she wrote during her sophomore summer, critiquing one of the most important military strategies in modern history—rewriting it several times in response to extensive criticism—at the U.S. military’s top professional journal,” Friedman says. “The paper also won the prize for best undergraduate paper produced in 2016 on diplomacy or the use of force. This accomplishment reflects an extraordinary combination of talent, effort, and grit.”

Friedman advised Blatt through the submission and revision process, but the work was entirely hers, he says.

Blatt says the idea of publishing started when Friedman suggested that she submit the paper to a journal, as much for the learning experience as for the chance of getting into print. Friedman suggested that Blatt start by submitting the essay to the most prestigious journal she could find, so that any feedback on the way to rejection would help her make her piece stronger.

“I very much anticipated getting rejected. It was not something that crossed my mind that they would publish it. It is really quite astonishing,” Blatt says.

Dean Lacy, chair of the Department of Government , says Dartmouth is in the unusual position of recruiting research scholars whose teaching is focused on undergraduates rather than graduate students. Dartmouth students not only get the chance to learn from faculty doing groundbreaking work, they also have many opportunities to collaborate and to receive mentoring on their own original research.

“We understand that our students’ work doesn’t stop in the classroom,” Lacy says. “We want them to produce research rather than just read about it.”

Parameters’ readership includes senior officers and leaders of the U.S. Army and the Department of Defense, Lacy says.

“I expect what Charlotte wrote will be read by politicians and military decision makers, and will have some influence on political thinking in Washington,” Lacy says.

Getting her work to the point of publication was an arduous task, Friedman says. The critiques Blatt received through three rounds of revisions were extremely rigorous and challenging.

“The reviewers were split on the paper, with one recommending ‘accept’ and the other recommending ‘reject.’ The negative view was strong, and I made clear to Charlie that she should not expect this person to change his or her mind. Nevertheless, Charlie undertook a serious overhaul of the paper, this time, during winter vacation, and she resubmitted the piece,” Friedman says.

“I was very confident I would not make it to publication, but I wanted to see what would happen,” Blatt says. “Also, I was extremely proud of this paper and I didn’t want to abandon it.”

Friedman says in reviewing the past five years of Parameters, he discovered that out of 170 articles, only 16 were written by authors who did not have a PhD, a military background, or a distinguished career in government. And those 16 were made up of think tank fellows, PhD candidates, journalists, or security contractors.

“As best I can tell, Charlotte is the most junior person to publish in Parameters in at least the past five years,” Friedman says.

Blatt, a War and Peace Fellow with the John Sloan Dickey Center for International Understanding, a Rockefeller Leadership Fellow, and a James O. Freedman Presidential Scholar research assistant for Associate Professor Jennifer Lind, says the Dartmouth government department has had a profound influence on the trajectory of her life and career. She plans to write a senior thesis in her final year and is contemplating law school after graduation.

Blatt is a past president of the Dartmouth Campus Democrats, coordinating with the Hanover Democrats and state party to bring Hillary, Bill, and Chelsea Clinton and Bernie Sanders to Dartmouth during the primary and general election seasons.

As for long-term goals, Blatt is not ruling out her own run for public office. She’s already had experience debating defense policy with some of the country’s leading political and military leaders.