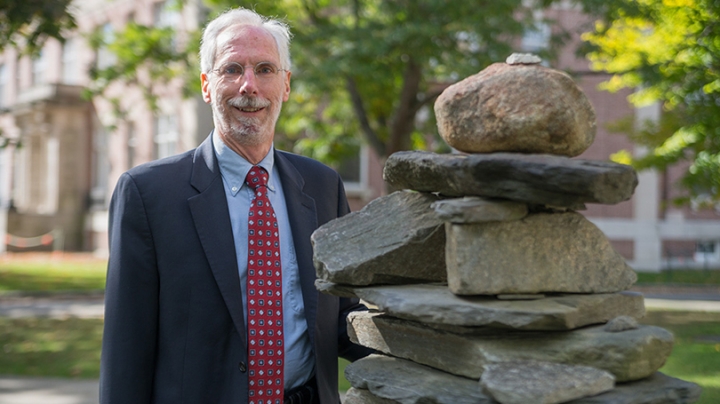 Ross Virginia, the director of Dartmouth’s Institute of Arctic Studies and the Myers Family Professor of Environmental Science, has been named a global fellow with the Polar Initiative of the Woodrow Wilson Center for International Scholars.

“It is good for the Institute of Arctic Studies and it is very exciting for me personally to be chosen as a global fellow at Wilson. It is a very direct connection to the Washington policy world as it relates to the Arctic issues we are focused on,” says Virginia.

As the driving force behind the Institute of Arctic Studies, a lead scholar for the Fulbright Arctic Initiative, and a board member for the Dartmouth-based University of the Arctic Institute for Arctic Policy, co-founded with the University of Alaska at Fairbanks, Virginia is a leading scholar and educator in the study of polar ecology and the critical impact of climate change on these regions. He has also become an influential voice in the developing fields of international environmental law and policy.

Virginia traveled to Washington, D.C., to attend the June 21 and 22 Wilson Center-Arctic Circle Forum on “The United States and Russia in the Arctic,” which brought together delegates from international governmental and non-governmental organizations with stakes in the region. The Institute of Arctic Studies was a supporting partner in the conference, which focused on opportunities for cooperation and dialogue between the U.S. and Russia, the largest of the eight nations with Arctic territories.

“As we know, Russian-U.S. relations have been a hot topic lately,” Virginia says. “But in fact there is a long history of cooperation between our countries in the Arctic on important issues such as infrastructure development, environmental research, ports, shipping, indigenous populations—a wide range of topics. This level of good diplomatic relations is important to maintain, even if relations are rocky elsewhere.”

The Wilson Center is a congressionally chartered nonpartisan think tank dedicated to issues of international relations and policy; it is affiliated with the Smithsonian Institution. The center rededicated the Polar Initiative in 2016 to focus on issues of climate, security, development, and trade in both the Arctic and Antarctic regions. The Polar Initiative’s director, Michael Sfraga, formerly of the University of Alaska, served with Virginia as co-lead scholar for the Fulbright Arctic Initiative, which funded a first year of international Arctic research fellowships last year.