V.S. Subrahmanian joins Dartmouth from the University of Maryland. 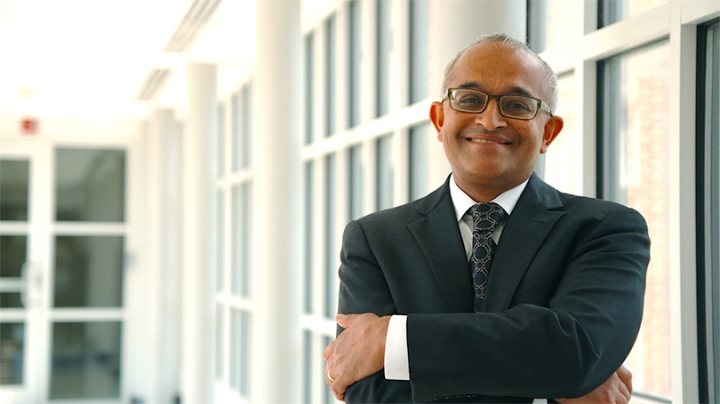 V.S. Subrahmanian has been named the inaugural Dartmouth College Distinguished Professor in Cybersecurity, Technology, and Society. (Photo courtesy of the University of Maryland Institute for Advanced Computer Studies)
7/05/2017
Body

V.S. Subrahmanian—whose work in data science and cybersecurity has been used to accurately forecast the behavior of terrorist networks, detect bots on social media platforms, prevent rhinoceros poaching, and much more—has been named the inaugural Dartmouth College Distinguished Professor in Cybersecurity, Technology, and Society, beginning Aug. 1.

The position is the senior appointment to the new Academic Cluster in Cybersecurity, Technology, and Society—part of President Phil Hanlon ’77’s academic initiative to extend Dartmouth’s impact on critical global challenges through the creation of 10 interdisciplinary groups focused on issues from health care delivery to engineering in the Arctic to the challenges and opportunities of globalization. In 2014, the College received a $100 million gift from an anonymous donor, half of which was used as a match toward creation of the academic clusters. Another gift from an anonymous donor is funding professorships, including Subrahmanian’s, within the cybersecurity cluster.

“V.S. Subrahmanian is a creative scholar whose collaborative spirit and dedication to teaching make him a wonderful fit for Dartmouth,” says President Hanlon. “Cybersecurity is one of the most critical technological issues of our time, and I am delighted that V.S. will be one of Dartmouth’s leaders as we work in this vital field.”

Scholars in the cybersecurity cluster will address the challenge of securing the cyber future by focusing on information technology security, privacy, and usability—focusing particularly on the security challenges of having everyday objects, from cars to home appliances to medical devices, connected to the internet.

This growing Internet of Things (IoT) is a “fertile ground for malicious hackers, while simultaneously presenting a host of social hacking, privacy, and ethical challenges for cybersecurity experts, policy makers, and social scientists,” says Subrahmanian, whose research applies probabilistic logic models to real-world scenarios. “The next frontier for terrorist groups and rogue nation states is IoT. Securing IoT requires a detailed understanding of the adversary as well as the people and systems being protected.”

“We at Dartmouth want to be at the forefront of offering technological solutions to secure our computing infrastructure, as well as training the next generation of cybersecurity innovators,” says Hany Farid, the Albert Bradley 1915 Third Century Professor of Computer Science and chair of the Department of Computer Science. “We are thrilled to have V.S., a world-renowned cybersecurity expert, take a leadership role in these efforts at Dartmouth.”

“Dartmouth’s multidisciplinary investments in medical devices, energy research, and computer security present an unparalleled opportunity to build world-class cybersecurity for IoT, in close cooperation with additional stakeholders from the social sciences and public policy,” Subrahmanian says. “I’d like to see Dartmouth’s fabulous students and faculty work across disciplines to develop the cutting-edge tools, policies, and ethical guidelines that will enable our nation to stay one or two steps ahead of our adversaries, while still protecting the social and ethical values that we cherish.”

Subrahmanian joins Dartmouth from the University of Maryland, where he has built a career over three decades as a professor in the department of computer science and the University of Maryland Institute for Advanced Computer Studies, for which he served as director from 2003 to 2010; founding co-director of the Laboratory for Computational Cultural Dynamics; and founding director of the Center for Digital International Government. He is a fellow of the American Association for the Advancement of Science and the Association for the Advancement of Artificial Intelligence, and his research has been funded by the Defense Advanced Research Projects Agency (DARPA) and the U.S. Army and Navy, among others.

A prolific scholar, Subrahmanian is author or coauthor of 140 peer-reviewed journal papers. In 2015, he published The Global Cyber-Vulnerability Report, an analysis of more than 20 billion reports generated by 4 million computers in 44 countries, and led a team that won DARPA’s Twitter Influence Bot Detection Challenge, a competition to develop means of identifying and eliminating propaganda-spreading automated social media accounts. His work has been featured in national media, including PBS’s Nova, NBC Nightly News, The New York Times, The Washington Post, and The Wall Street Journal, among other outlets. He received his doctorate from Syracuse University, and was awarded a National Science Foundation National Young Investigator Award and the Distinguished Young Scientist Award from the Maryland Science Center/Maryland Academy of Science.

“As a firm believer in Sun Tzu’s maxim ‘know thy enemy,’ I’ve worked on developing predictive machine learning models to identify and incapacitate a host of bad actors, ranging from opponents in versions of chess to terrorist groups to rogue intelligence agencies to vandals on Wikipedia and influence bots on Twitter,” Subrahmanian says. “I’m passionate about developing technology that predicts how malicious actors will leverage technology, and developing safeguards ahead of time.”

“We are excited to have V.S. joining us here at Dartmouth, bringing his deep expertise in cybersecurity and related fields,” says search committee chair David Kotz, the Champion International Professor of Computer Science. “His interdisciplinary approach to research will fit neatly into Dartmouth’s collaborative environment and our Institute for Security, Technology, and Society (ISTS).”