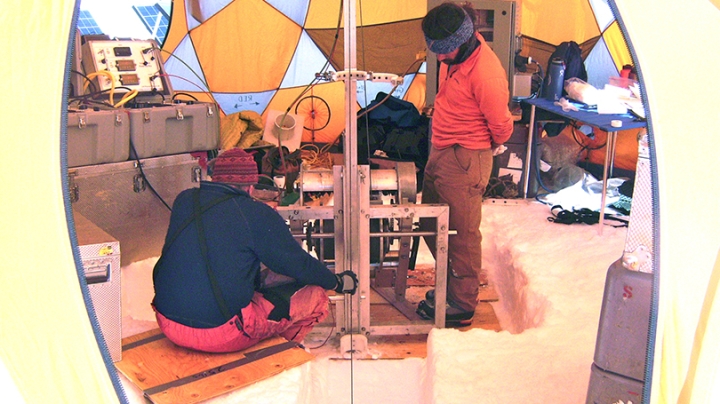 Ice cores from arctic mountain glaciers show a dramatic climate change that began nearly 300 years ago, documenting an unprecedented increase in the intensity and duration of winter storms. Drilled by a Dartmouth-led team, the cores show striking changes in weather patterns that may have reached as far as Florida.

“We attribute these changes to a warming of sea surface temperatures in the tropical Pacific,” says Erich Osterberg, an assistant professor in the Department of Earth Sciences at Dartmouth. “The North Pacific is very sensitive to what happens in the tropics. It is more stormy in Alaska now than at any time in the last 1,200 years, and that is driven by tropical ocean warming.”

Dartmouth’s Erich Osterberg stands atop Mount Hunter with Denali in the background. (Photo by Seth Campbell)

The cores, two sets drilled in parallel at Mount Hunter in Alaska’s Denali National Park and another from the summit of Mount Logan in Canada’s Yukon, measure more than 600 feet in depth and depict more than a thousand years of climate history in the North Pacific. Denali and Mount Logan are the first- and second-highest mountains in North America.

“If you can show the same phenomenon in two different cores, or ideally three or more, then you have a lot more confidence in your results,” says Osterberg. “It is not just restricted to one small region, say, Denali, and it’s not the result of some error in our analysis. We are melting ice and then chemically analyzing it, and interpreting that in terms of climate. Any time we have these types of climate proxy records, we like to see a common signal in more than one record.”

Annual rings can be seen in a core from deep in Alaskan glacial ice. (Photo Courtesy of Erich Osterberg)

In a paper published in July in Geophysical Research Letters, Osterberg and colleagues detail their analyses of the cores and discuss the implications.

They concluded from the cores that that current period of storm intensification began in 1741, and future warming of tropical Pacific waters—due mostly to human activity—would continue the long-term storminess trend.

Beyond the climatic conclusions Osterberg and his colleagues draw from the cores, he is hesitant about ascribing the sea surface warming beginning in the 17th century wholly to human sources. Warmer tropical waters since the mid-18th century can be the result of both natural variability and human-driven climate changes.

“There is no doubt that warming tropical ocean temperatures over the last 50 years is mostly caused by human activity,” says Osterberg. “A really interesting question is when you go back over hundreds of years, how much of that is anthropogenic?”

Beyond human activity, tropical sea surface temperatures further back in time are affected by volcanic eruptions, changes in the intensity of sunlight, and natural events like El Niño.

“The reality of the science is that our changing climate is driven by human causes on top of natural cycles, and we have to disentangle these things,” says Osterberg.

Erich Osterberg has also drilled ice cores in Greenland to help understand the speed at which its ice sheet is melting, a process accelerated by human caused climate change and leading to sea level rise. Knowing how fast Greenland is melting today will improve the computer models of how Greenland is going to melt in the future. See video of his work in Greenland below: 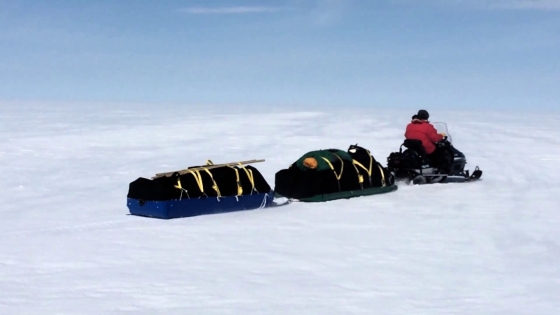