Caribbean Coral Conservation and the Future of Fishing 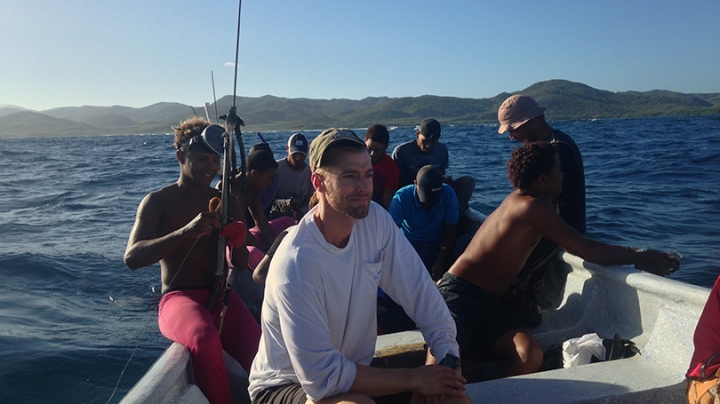 Dartmouth PhD candidate Tyler Pavlowich is working with spearfishermen in the Dominican Republic to ensure a productive and sustainable ecology. (Photo courtesy of Tyler Pavlowich)
8/21/2017
Body

Tyler Pavlowich has spent much of the last five years in villages along the northwest coast of the Dominican Republic, studying the interplay of fishing practices, the health of the area’s coral reefs, and the local economy.

Working closely with local fishermen, he has concluded that how they fish and what they catch can make a big difference to the coral reefs. “It isn’t surprising, given their extensiveness and biodiversity, that coral reefs form an integral part of the social fabric and economies in many tropical nations,” says Pavlowich.

Pavlowich is completing his PhD in the Ecology, Evolution, Ecosystems, and Society Graduate Program, under Anne Kapuscinski, a professor of environmental studies and the Sherman Fairchild Distinguished Professor in Sustainability Science. “Around the world, reefs are in poor condition or being stressed a lot, and coral reef conservation has become an important goal globally,” she says.

Against this backdrop, an ecological drama is playing out—with parrotfish in a leading role. “They are responsible for grazing down the algae that live on the coral. Left unchecked, the algae could smother the coral,” says Kapuscinski. Around reefs worldwide, parrotfish play this fundamental ecological role in controlling algae.

Parrotfish have a curious lifecycle: The young are nearly all female, but in later life some change gender and become male. Though threatened, the parrotfish continue to be a staple in the Dominican diet and constitute an economic resource, marketed in the Dominican Republic and Haiti. These fish are high on the list of preferred quarry for Dominican fishermen, who use spear guns in their pursuit. However, Pavlowich and Kapuscinski think the sex changes open a door to conservation—a priority in the face of the overfishing that has diminished their numbers and reduced their sizes.

Pavlowich is the lead author on a paper written with Kapuscinski and recently published in PLOS ONE that considers the complexity of the situation and suggests some remedial approaches. “Social and ecological systems come together in the act of fishing,” they write. “However, we often lack a deep understanding of the fishing process, despite its importance for understanding and managing fisheries.”

The scientists worked with the fishermen from the outset. “I examined the process of spearfishing in the fishing community of Buen Hombre, and used videos of spearfishermen underwater to observe the activity from their perspective,” says Pavlowich. “This gave us a glimpse of the underwater world they experience and examined how they fish in that environment.”

He says that while spearfishing supports the economic and social organization of this community, it also, when unregulated, degrades fishery resources. His research explores possible fishery management strategies, including several paths that would allow for continued fishing. One way would have the fishermen choosing which fish to spear.

Spearfishing is a productive technique, but it also affords the fishermen the opportunity to be selective in the fish they target. “When underwater, they can actually identify not only the species of fish, but in parrotfish they can tell the life phases apart because males and female have different color patterns,” says Kapuscinski.

Pavlowich says fishermen could potentially regulate the fishery by discerning males in what is called the “terminal phase” and targeting them. His research suggests that the abundance of males is less critical to a viable reproductive population, and that harvesting only males while protecting females would have a smaller impact on reef populations. “That practice could contribute to population rebuilding while ensuring revenue for the fishermen. You could ban the catching of initial phase fish and allow them to only catch terminal-phase male fish,” he says.

Kapuscinski says, “The obvious alternatives are extreme. You could completely ban taking parrotfish, but enforcing the ban is not feasible in the Dominican Republic. On the other hand, if you don’t do anything to regulate, overfishing will continue to erode fish abundance and fishermen’s incomes.”

Pavlowich agrees. “You cannot rely on resource-poor fishermen to voluntarily reduce their catch, but effective alternatives might take advantage of the knowledge and decision-making process the fishermen already have in place,” he says. “The fishermen are certainly aware of the issues and the challenges, and they would like to see something done.”

He says that government involvement is going to be necessary at some point. However, he says, “The fishermen have to care, the public has to care, and the government has to care to get this done.

“We hope that our research will inform successful approaches to regulating the fishery,” he adds. “Like many coral reef fisheries, those in the Dominican Republic would probably not respond well to regulation solely by a central government. So, we need strategies that make fishermen and other stakeholders part of the solution.”

The research is part of an ongoing collaboration with Michael Cox, an assistant professor of environmental studies at Dartmouth, members of the Buen Hombre community, and AgroFrontera, a nongovernmental organization in the Dominican Republic that works to address sustainable agriculture and sustainable fisheries in the country.