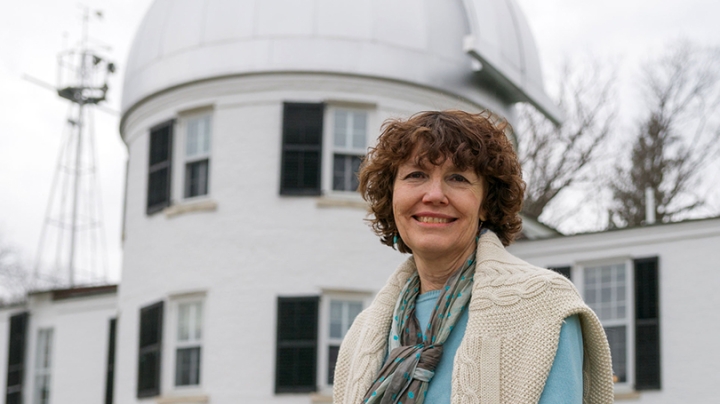 The American Geophysical Union has honored Mary Hudson, the Eleanor and Kelvin Smith Distinguished Professor of Physics, for outstanding contributions to her field. (Photo by Eli Burakian ’00)
8/08/2017
Body

Mary Hudson, the Eleanor and Kelvin Smith Distinguished Professor of Physics, has received the 2017 John Adam Fleming Medal from the American Geophysical Union, the world’s largest organization of Earth and space scientists.

Hudson is among 29 recipients of AGU awards and medals this year who were honored “for their exceptional achievements, outstanding contributions and service to the scientific community, and attainment of eminence in Earth or space science fields,” wrote the organization in its July 20 announcement. “This distinguished group of honorees—scientists, leaders, educators, and communicators—has explored new frontiers in geophysical or space research through their creativity, original thinking, and groundbreaking advances.”

“Mary Hudson embodies the teacher-scholar model that is emblematic of the Dartmouth faculty,” says Elizabeth Smith, dean of the Faculty of Arts and Sciences. “The Fleming Medal is testament to her accomplishments as a space physicist and the students she has guided and trained will undoubtedly continue on the trail she has blazed. We are proud of Mary and we offer our congratulations on the honor bestowed by her peers in the AGU.”

Hudson, who joined the Department of Physics and Astronomy in 1984, studies the Earth’s magnetosphere—the magnetic field that is like a giant magnet with lines of force surrounding our planet. With funding from NASA and the National Science Foundation, Hudson and her students study patterns of space weather—the conditions surrounding the Earth that may be influenced by activities such as solar eruptions.

“If we can provide better forecasting of space weather, as we do for atmospheric weather, then people operating the satellite systems and manned spacecraft will be able to plan accordingly,” Hudson says.

“The Fleming Medal is a great honor,” she says. “It complements the James B. Macelwane Medal from the AGU that I won in 1984, an early career award for promising young scientists. I received the Macelwane just as I came to Dartmouth, and now to receive the Fleming as I approach retirement is a tremendous honor, bookending my career.”

Hudson completed her teaching duties in spring 2016, but continues to be actively engaged in sponsored research and mentoring graduate students and her one postdoc at Dartmouth.

John Adam Fleming was an American physicist interested in the magnetosphere and the atmospheric electricity. Elected into the National Academy of Sciences in 1940, he was the cofounder and director of the Department of Terrestrial Magnetism at the Carnegie Institution of Washington.