Rankings are based on the number of scientific papers that lead to patents. 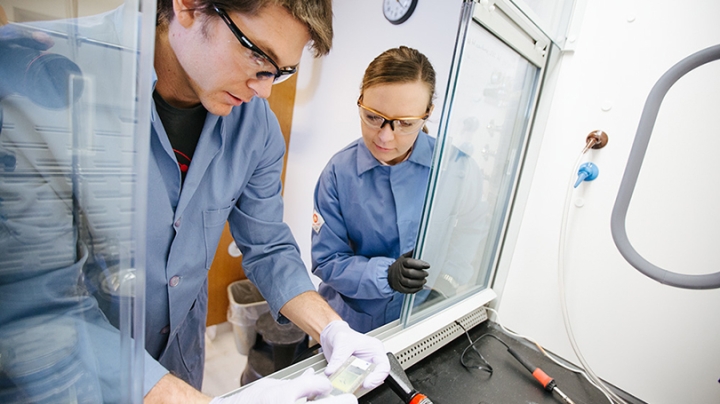 Dartmouth ranks highly in a new measure of the impact of academic research on global innovation, according to the Nature Index 2017 Innovation supplement. The index examines how often research articles from top science journals are cited in third-party patents around the world.

Dartmouth ranks 20th among the top 200 institutions surveyed in the index, and is the only Ivy League institution in the top 20. Rankings are based on the number of scientific papers that lead to patents owned by entities other than the university itself.

“It’s a small college, but there are those that cite her,” says Dean Madden, vice provost for research and professor of biochemistry and cell biology at the Geisel School of Medicine. “The nice thing about this methodology is that it focuses on the role of basic research, published in the peer-reviewed literature, as a source of innovation in the long term. Too often, we assume that fundamental and applied research are siloed—papers vs. patents—but they’re not.”

The index aims to help show the social benefits of research. “This analysis comes at a time when following the transfer of scientific knowledge into industry and the economy is a growing priority for governments and research funding agencies—for them, the need to demonstrate that publicly funded science is being used for society’s benefit is paramount,” says David Swinbanks, founder of the Nature Index.

As an example of how academic institutions help transfer scientific knowledge into industry and the economy, Nature Index 2017 Innovation profiles the work of Michael Sporn, a professor emeritus of pharmacology at Dartmouth’s Geisel School of Medicine whose research between 1959 and 2006 has frequently been cited in patents, which have in turn led to numerous drugs in clinical development for cancer, fibrosis, and other diseases. Sporn came to Dartmouth in 1995 after a prolific career at the National Institutes of Health.

Madden says Dartmouth’s high ranking in the index is continued affirmation of the College’s strength in research and innovation, noting that Dartmouth has placed on the National Academy of Inventors’ list of the top 100 worldwide universities granted U.S. patents five years a row.

Nature Index 2017 Innovation is published by Nature Research and is part of the family of publications that includes the weekly journal of science, Nature.