Richard Ned Lebow is recognized for his contribution to international political theory. 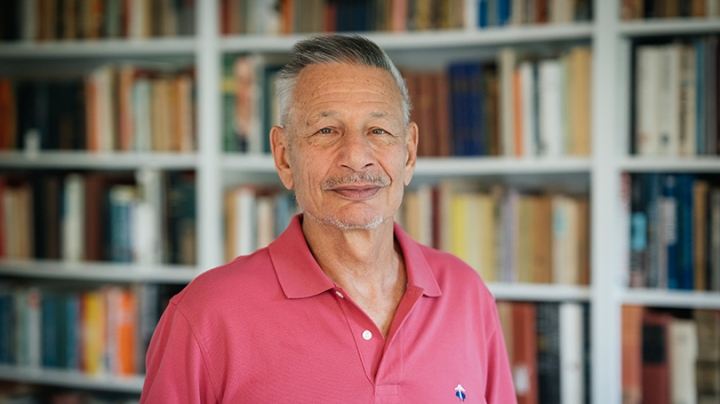 Richard Ned Lebow, a professor of government emeritus, has been elected a fellow of the British Academy, the UK’s national institution for the “world’s leading minds” in the humanities and social sciences.

Lebow, the James O. Freedman Presidential Professor Emeritus, retired from teaching at Dartmouth in 2011. He is now a professor of international political theory at King’s College London and a fellow at Cambridge University’s Pembroke College in Cambridge, England.

“I was very pleased when I heard. Clearly it’s an honor,” says Lebow, who spends summers at his home in Etna, N.H. “I was a bit surprised because it requires that fellows of the academy see me as somebody who lives in Britain, and British colleagues are a bit slow in coming to that recognition.”

The British Academy and its sister association, the Royal Society, which is focused on the physical and biological sciences, are the equivalent of the National Academy of Sciences in the United States, supporting original research and providing scholarly analysis of current issues to political decision-makers. Each year, the fellows of the British Academy elect some 50 leading scholars into their ranks.

“It is an honorary title and confers membership in the academy, housed in a glorious building in central London, which one can use if you need an office or want to hide away in a library,” Lebow says. “And there’s the occasional dinner.”

Since it was established by Royal Charter of King Edward VII in 1902, the academy has conferred fellowships on some of the most influential British thinkers of the 20th century, including economist John Maynard Keynes, philosopher Karl Popper, paleoanthropologists Louis and Mary Leakey, writer C.S. Lewis, and sculptor Henry Moore.

“It’s the equivalent of an academic knighthood,” says Lebow.

At Dartmouth, and throughout his scholarly career, Lebow’s work has bridged international relations, political theory, psychology, and the Classics.

“I am interested in the richer Ancient Greek model of the human mind as a way to understand present-day political behavior,” he says.

Lebow was born in occupied France in 1941. He was smuggled out of the country as an infant by the Jewish underground and later adopted by an American family in New York City. This history has perhaps influenced his scholarly exploration of the psychology of decision-making, conflict resolution, and the political and ethical consequences of identity, he says.

He has often used counterfactual thought experiments to probe humans’ understanding of the world. “People believe the future is wide open, but the past overdetermined—it had to happen the way it did. But if you expose them to counterfactuals, they become more open to contingency. In doing that, you can also get them to probe why they believe certain things. So it turns out to be a psychological and pedagogical tool.”

His 2014 book, Franz Ferdinand Lives!, was a counterfactual exploration of a world in which World War I never happened. Published in 2014, the hundredth anniversary of the assassination of Archduke Franz Ferdinand in Sarajevo, it attracted wide attention in the international media.

In the absence of that war, Lebow argues, the multicultural Hapsburg monarchy might never have fallen, the economic and political conditions that led to the rise of Hitler might not have come about, and the State of Israel might have remained an abstract goal.

In welcoming the 42 new U.K. fellows for 2017, president of the British Academy, Sir David Cannadine, told the members, “In a world where parochialism, nativism, nationalism, xenophobia and populism seem in too many places to be on the march, it is our job to provide light and learning and hope.”