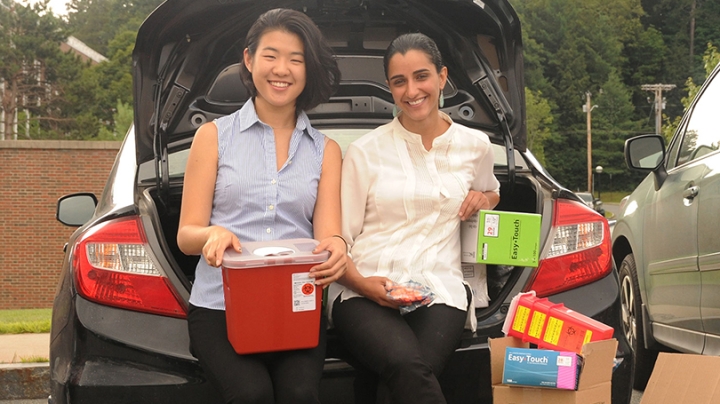 The first program of its kind in the Granite State, it is run by Project 439 and distributes free naloxone (an overdose reversal drug), sharps containers, and clean syringe kits while educating the community about overdose protocol and preventing the spread of diseases such as HIV and Hepatitis C, which are prevalent among intravenous drug users.

New Hampshire is second only to West Virginia in overall opioid overdose deaths, but leads the country in fentanyl overdose deaths. In 2015, seeking a way to stem the state’s rising tide of deaths, then first-year medical students Andrew Blake, Geisel ’19, Margot LeNeveu, Geisel ’19, and Michelle Scheurich, Geisel ’19, founded Project 439 (named for the number of New Hampshire deaths that year) as part of their Schweitzer fellowships. Under the auspices of the project, they proposed legalizing needle exchange programs, which were illegal at that time, and worked with state legislators to draft a bill. Blake testified on behalf of Senate Bill 234 in early 2017, and this spring Gov. Chris Sununu signed the bill into law.

Chen and Azizgolshani, also Schweitzer Fellows, took over managing the project as first-year students in fall 2016 and began laying the groundwork for the harm reduction center in Claremont.

“There is strong evidence that harm-reduction approaches like needle exchange and access to nonjudgmental mental health care work. Pointing the finger and talking about personal responsibility, on the other hand, can feel good for the person doing the judging, but just doesn’t work very well,” says Timothy Lahey, an associate professor of medicine at Geisel and an expert in infectious diseases.

“It is great to see Dartmouth students pairing compassion with evidence to reach neighbors and citizens who are in trouble,” Lahey says. “I’m really proud they are part of our school.”