Rehab adds 17 rooms and an elevator to East Wheelock cluster in wake of Oct. 1 fire. 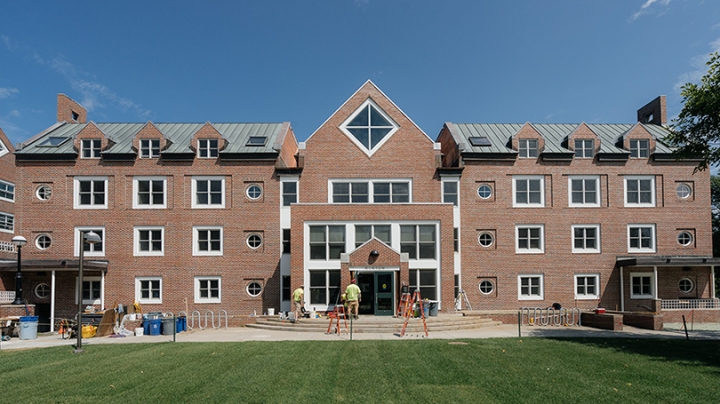 A completely renovated Morton Hall has reopened to students after an Oct. 1 fire left the residence uninhabitable. (Photo by Eli Burakian ’00)
8/25/2017
Body

Students have started moving into a new Morton Hall following a speedy redesign and renovation project that began days after an Oct. 1 fire left the building uninhabitable.

“We think the students are going to be really happy with it, and we need it back on line, so we're really excited that it was ready for occupancy for this fall after just 10 months,” says Mike Wooten, associate dean of residential life.

Because the building had to be gutted, the Office of Residential Life had a blank slate to redesign the floor plans in consultation with the architects, says Patrick O’Hern, capital renewal program manager with Facilities Operations and Management.

“They were able to offer a lot of feedback to the design team about the goals of the new house communities and creating spaces that can help bring students closer together,” O’Hern says. “I think the new Morton reflects those goals better than the old Morton did.”

Among improvements are an increase of 17 beds from 67 to 84, installation of an elevator, and the configuring of two additional central common areas to create a community space on each of the building’s four floors.

“We thought a lot about just the right amount of private space mixed with public spaces that create the opportunity to nudge people into common areas—that allow students to huddle up and study in small groups or to watch TV or generally be together in a more public way that still feels like a living room,” says Wooten.

Because Morton Hall was gutted after the fire, the Office of Residential Life took the opportunity to redesign floor plans to add more common areas. (Photo by Eli Burakian ’00)

There were no injuries when the four-alarm fire struck in the early morning hours of Oct. 1, but Morton had severe smoke and water damage. Building residents were quickly relocated to temporary housing spaces around campus. Fire officials determined the fire was caused by students using a small charcoal grill on a flat section of roof outside a residence hall window. The grill had been left unattended at the time of the fire.

Morton, Andres, McCulloch, and Zimmerman halls make up the East Wheelock house cluster, which was established in 1996 as Dartmouth’s first “intentional community,” and later became one of the models for the campus-wide residential community system introduced in 2015.