An oral history project records personal stories of Dartmouth community during the war. 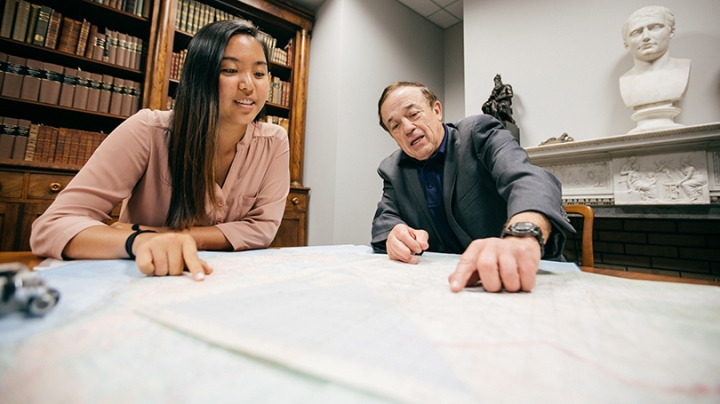 Dartmouth Vietnam Project interviewer Karen Cao ’19 listens as Jonathan Feltner ’67 points out the location of his U.S. Marine platoon during the Tet Offensive in 1968. (Photo by Robert Gill)
8/23/2017
Body

When Jonathan Feltner ’67 and Karen Cao ’19 met recently as participants in the Dartmouth Vietnam Project, Feltner brought a briefcase full of maps and pictures to help Cao understand his experiences during the Vietnam War.

He had a lot to offer. Within a year of graduating from Dartmouth ROTC, Feltner was serving as a U.S. Marine Corps 2nd lieutenant commanding a platoon of Marines on the receiving end of a massive Viet Cong attack that became known as the Tet Offensive. He returned at the end of America’s involvement in the war in 1975 to aid the “boat people” fleeing the country after the fall of Saigon.

He sees the oral history project as his chance to add to the understanding of a critical time for America.

“I view this as our legacy,” says Feltner, “The important thing is the opportunity to share with the younger generation some of the lessons learned and some of the things that we have seen. If we don’t give this to students now, it will be lost.”

The Dartmouth Vietnam Project is a collaboration between current Dartmouth students and older members of the College community who have volunteered to share their memories of the war and its impact on American society. Students from any major can apply to the co-curricular program. Those accepted start by doing training in oral history methods and complete one interview as part of a summer research term. Their work during this initial term is funded by the Presidential Fellows Program or the Junior Research Scholars Program, both of which fund student research work with faculty across campus.

The students must also commit to working with the project for one additional term during the academic year, when they conduct and archive three additional interviews. For that second term, students have the option of continuing as a research fellow or receiving academic credit in the form of an independent study directed by one of the Vietnam project faculty leaders. All of the interviews become part of the permanent research collection at Rauner Special Collections Library and are also available on the Dartmouth Vietnam Project website.

Before joining the project, Cao, like most of her peers, had given little thought to how complicated and painful the Vietnam war era was for many who lived through it.

“I was too young to understand, or even see that aspect. It wasn’t something that was really on my radar,” Cao says. But many of the long-hidden stories and feelings seem to be coming out, she says. “I think now, you see a lot more of that. You see a more open sense of sharing.”

The students learn the history of the U.S. involvement in Vietnam, the social and political upheaval during the war era, and the technical principles of conducting and recording oral histories before conducting their first interviews at the end of the term. The workshops are taught by Associate Professor of History Edward Miller, a scholar of the Vietnam War; Assistant Professor of History Jennifer Miller (no relation), who specializes in U.S. foreign relations after World War II; Caitlin Birch, digital collections and oral history archivist at the Dartmouth Library; and Assistant Professor of History Julia Rabig, whose work focuses on the dynamics of modern social movements.

The project aims to teach Dartmouth students about the theoretical and ethical questions involved in preparing professional grade oral history interviews to be used as research resources, and to help students understand the problem of relying on a single historical narrative, Rabig says.

“I think oral history is one of the few ways that you can really get at the unexpected texture of history and people’s everyday lives. I expect that students will learn things about the Vietnam War that they didn’t in other classes. They’ll understand the slow-motion elements of history—that huge conflicts impact people’s lives in unexpected ways,” Rabig says.

“The students will be interviewing people who fought in Vietnam, people who are related to people who fought, people who were engaged in intelligence, people who protested the war,” she says. “They are getting very different perspectives, and I think a sense of how the chronology of the Vietnam War changes according to those perspectives. For some it is a limited experience, and for others it goes on and has long-term impacts on their families and the institutions that they’re a part of.”

Jennifer Miller, who launched the project in 2014 with Ed Miller and Birch, says the work aims to “create a better historiography by fitting oral histories and personal narratives into larger trends,” as well helping students understand history in terms of interactions between people.

“On one level, this is creating better history, but on another level, it is about interacting with, and working to understand people who are speaking from a different experience. To be more empathetic, that to me is valuable,” she says.

Cao agrees. She interviewed Feltner for more than three hours, and both said they could have talked much longer.

“I think a lot of this process is just being able to have a conversation with someone, and to really want to listen—to hear what they want to say and listen to them,” she says. “In terms of anything else I pursue in the future, being able to listen to what people have to say and allowing them to shape their narrative is a huge part of being successful.”

Feltner sees the project as a chance to share some of the lessons of history.

“I’ve been there and done that during what I think is a pretty significant period in America history. And as I told Karen, we were part of the end of innocence for Americans—questioning their government, and war, and a whole lot of other things,” Feltner says. “I think the things we’re trying to leave them with is the legacy of how you view war, and how you view service, and how you view a lot of things that you hope the younger generations can learn from. We want to pass on not only what we did right, but maybe more importantly, what we did wrong.”