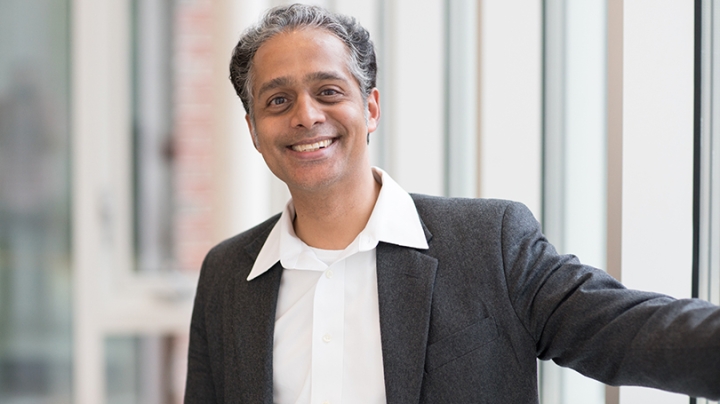 Professor Rahul Sarpeshkar’s commitment to interdisciplinary research is one of the things that drew him to Dartmouth. (Photo by Eli Burakian ’00)
9/14/2017
Body

Read the full story, published by the Dartmouth Alumni Magazine.

Human brains, like supercomputers, can perform quadrillions of operations per second. But a supercomputer guzzles a lot more energy, enough to power hundreds of houses. A brain, on the other hand, runs on the energy equivalent of an electric shaver.

“Cells are the most energy-efficient computers ever built,” says Rahul Sarpeshkar, an inventor and multifaceted professor—of engineering, physics, microbiology and immunology, and physiology and neurobiology—who arrived at Dartmouth two years ago after working at the Massachusetts Institute of Technology for 16 years. With him came his work on mimicking the way the human body computes.

Sarpeshkar has built low-power and battery-free implants that aid the deaf and paralyzed. He has turned a cell into a calculator. He’s working on an ultra-fast supercomputer that can test drugs virtually and he is figuring out how to reprogram immune cells to fight cancer. At Dartmouth, he aims to build a new kind of supercomputer by filling a room or building with millions of his cell-inspired computer chips.

Sarpeshkar’s commitment to interdisciplinary research is one of the things that drew him to Dartmouth. He is the head of Dartmouth’s first cluster initiative—the William H. Neukom Academic Cluster in Computational Science. The cluster initiative brings together interdisciplinary faculty teams to solve urgent global problems. “Rahul is a cluster unto himself, the way he spans different perspectives, methodologies and worldviews,” says Provost Carolyn Dever. “He understands that this is a place where he can succeed because he can go across lines of discipline and school so easily.”