Dark Matter: You Can’t See It, But It’s Everywhere 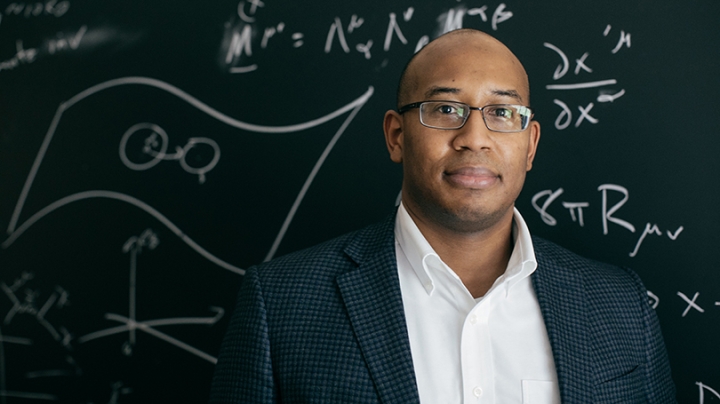 As a child growing up in Memphis, Tenn., Devin Walker spent countless hours in the public library, where, he says, his parents had to impose a limit on borrowing. “I wasn’t allowed to take out more than 25 books at a time,” the assistant professor of physics and astronomy recalls.

The more he read, the more his interest in science grew. In high school, he studied biochemistry and molecular biology, and, at Hampton University in Virginia, he planned to go into pediatric medicine. But he changed course when an undergraduate professor opened his eyes to physics. Walker continued his education at Harvard, where he earned a PhD in physics. Following postdoctoral work at the University of California at Berkeley and Stanford University, Walker’s first faculty position was at the University of Washington. He joined the Dartmouth faculty this year.

Walker studies dark matter, which has not yet been detected, yet is believed by scientists to make up most of the mass in our universe.

In addition to teaching and conducting research, Walker says he plans to bring to Dartmouth some of the world’s most prestigious physicists to offer public lectures and colloquia about dark matter. “I want my students to make contact with the best scientific minds in the world,” he says.

Walker recently spoke with Dartmouth News about his research.

As a particle theorist and astronomer, you focus on dark matter. Where does your curiosity come from?

When I was first studying science, I found it really exciting that you could predict certain events. Think of the universe as speaking a language, or making music. There’s always the question of what kind of song is being played. That song is the motion of galaxies, and physicists try to figure out what that song is.

I want to work at the boundary of our knowledge, to push that boundary, and that frontier has been changing over time. For example, 120 years ago, scientists on one boundary were trying to understand electrons. You can see the modern world that electricity gave us. I am interested in working on one of today’s boundaries, which, right now, is dark matter.

Can you say in a nutshell what scientists know about dark matter? How does it differ from dark energy?

About 85 percent of all the matter in the universe is dark matter. The universe is stretching out, as you might stretch a piece of dough. We know the universe is accelerating, and that’s kind of odd. This discovery was one of the major discoveries of the last 20 years. Whatever is causing the acceleration is called dark energy.

Everything in the universe gravitates. In other words, matter wants to attract other matter by gravitational interaction. But you would think, if gravitational pull keeps bringing things closer to each other, the universe would be contracting, getting smaller. But just the opposite is true—the universe seems to be expanding, pulling apart. The force that is pulling at the dough, expanding the universe, is what we call dark energy. Dark matter is not dark energy; it’s stuff. It is the name given to the matter that we can’t see, but we know was necessary for the formation of galaxies. We know that because Einstein’s theory of relativity works so well. The reason I focus more on dark matter than on dark energy is that I think dark matter is a mystery we can solve in our lifetime. I think we are getting pretty close.

Maybe that’s why it’s such a hot topic these days. We’re starting to see documentaries about dark matter on public television. But the last one I saw didn’t arrive at any conclusions. What’s your own approach? What makes it promising?

Let me tell you a little bit about the paper I’m writing now. Einstein’s theory predicts that there are some regions where we are going to have a lot of gravity: black holes. What I have been working on is merging our understanding of black holes and using it as a way to understand dark matter. Dark matter is very gregarious. That’s why the universe is the way it is—because dark matter is friendly. It likes to talk to everything else gravitationally. It loves hanging around black holes. My research team proposes to use a worldwide telescope to look for these black holes and to learn a lot about dark matter. It’s called the Event Horizon Telescope, and it’s not just one telescope, it is composed of several telescopes all over the world. So, as the Earth rotates, the telescopes can capture images of black holes and record data.

You say that even though dark matter “talks gravitationally,” the universe seems to be accelerating, flying apart. Some people might find that idea frightening, or at least depressing. How do you feel about it?

Luckily for us, if that happens, it won’t happen for eons. But for those of us who study particle physics and cosmology, these are the really important questions. If we understand dark matter, we will fundamentally understand a huge chunk of what our universe is. We know it exists; we just don’t know what it is.

There must be some guesses.

Yes. Dartmouth’s physics and astronomy department has three postdocs: Djuna Croon from the University of Sussex, Ashley Perko from Stanford, and Chen Sun from the Institute of Theoretical Physics at the Chinese Academy of Sciences. They are each working on best guesses about how to characterize dark matter. We call possible forms of dark matter “candidates.” Some dark matter candidates solve other problems in physics, so those are the ones everyone really wants to understand. Other dark matter candidates behaved, in the early universe, like you and me. And thirdly, there’s just weird stuff. We’re mostly interested in the first two candidates.

What do you mean, dark matter in the early universe behaved like you and me?

In the early universe, everything communicated with each other. Here’s one way to look at it: I was cooking last night, and boiling water for pasta. If I had stuck a thermometer in the pot, the water would have been pretty much the same temperature everywhere. Dark matter was like that, initially. It communicated with everything, and that communication meant that everything was in thermal contact with each other. That’s called “thermal dark matter.”

Are you saying that dark matter behaves differently now—that it is no longer thermal? Is that why it’s so difficult to understand, because dark matter no longer follows rules we understand?

But human beings live in only one galaxy. Why care so much about the other ones?

It goes back to electrons. People probably thought, at some point, why understand electrons? Can you imagine getting to the future we all want by understanding matter that we have never before been able to characterize?

Think about what science has given us over the years. The activities associated with building giant particle accelerators gave us more efficient MRI machines and the internet. Understanding relativity gave us GPS. Basic science has really expanded our way of life. Maybe understanding dark matter will lead to better transportation, for example.

What are your hopes and expectations for your research team?

Do you see your team as competing in a race for answers to these questions?

Yes, and it is really fast-paced. If you look at the arXiv, a website where physicists from around the world post their research papers, you see new papers and theories about dark matter and energy popping up daily.

How would you sum up the state of scientific discovery about dark matter at this moment?

We, as a physics community, are really confused. But the person or persons that can get us out of this confusion—that is the brass ring.