Nina Pavcnik’s students get a chance to work on a paper for the Jackson Hole Summit. 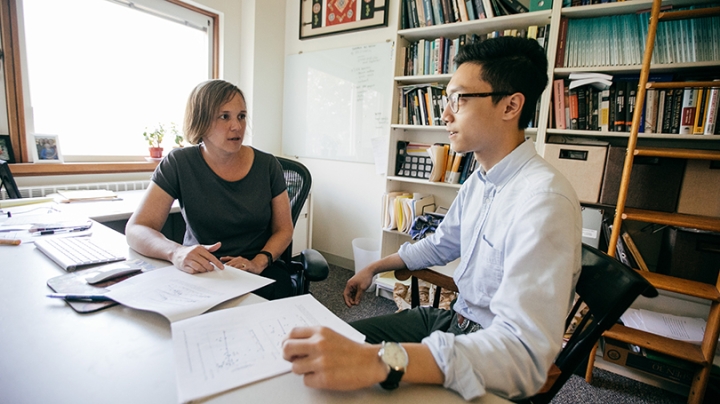 Professor of Economics Nina Pavcnik talks with Hung Nguyen ’18 about their research, presented to Fed Chair Janet Yellen and many other leading monetary policy experts. (Photo by Robert Gill)
9/27/2017
Body

Christine Dong ’19 had no idea that her sophomore summer project on the economic impact of international trade would end up in the hands of Federal Reserve Chair Janet Yellen and many other influential central bankers.

It only dawned on her after she saw news reports about Professor of Economics Nina Pavcnik’s presentation in Jackson Hole, Wyo., to Yellen, European Central Bank President Mario Draghi, and more than 100 other renowned monetary policymakers and economists. Fed disclosure regulations meant that details of the meeting were strictly embargoed, so Pavcnik didn’t tell her presidential scholar where the paper would be presented.

“Fostering a Dynamic Global Economy” was the theme of this year’s Jackson Hole Symposium, which has been hosted by the Kansas City Fed in Grand Teton National Park every year for more than three decades. Pavcnik, whose widely cited research focuses on the influence of trade policy on growth and the consequences of international trade on livelihoods and poverty, was invited to present one of four academic papers at the exclusive summit that The Economist has described as “Davos for central bankers.”

“It was one of those moments. You get invited and you’re so excited because it’s one of the big conferences. You realize about 60 heads of central banks, including Janet Yellen and Draghi, and many very well-known economists, are going to be my audience. It’s also a little bit nerve-wracking,” says Pavcnik, the Niehaus Family Professor in International Studies.

“Nina’s invitation highlights her status as one of the world’s leading experts on international trade and poverty,” says Christopher Snyder, the Joel Z. and Susan Hyatt Professor of Economics and chair of the department. “Think of her audience: the heads of the Fed and the European Central Bank, who set policy determining the value of the world’s major currencies, and the heads of the central banks of most other major countries; the whole business press; a handful of academics from top U.S. economics departments. So besides being an honor, it was an opportunity for her to influence policy improving the well-being of a swath of the globe.”

Pavcnik began work on her paper “The Impact of Trade on Inequality in Developing Countries” at the start of the summer term, when she enlisted her brand new presidential scholar, Dong, and economics advisee Hung Nguyen ’18 to begin compiling and analyzing data for the project.

“I had a chance see this project progress from the idea generation stage all the way to the finished product. It’s really cool to see the product evolve from each stage to the next,” Nguyen says.

Pavcnik’s paper looked at attitudes toward trade in a number of developing and developed countries, and assessed the state of the evidence on trade policy’s “winners” and “losers.” In simplest terms, she found that trade has an overall positive effect on national economies, but that there are long-lasting negative effects in certain regions, when, for example, a factory shuts down or moves overseas, or some workers leave a home region for the city.

Although there are many factors that contribute to economic inequality—technology, changing consumer tastes, national or international economic downturns—trade often becomes a political target, Pavcnik says.

“International trade is politically the easiest to focus on because you’re blaming it on foreigners, whereas we have accepted technology—we don’t want to stop technology. People believe that job and earnings losses can be stopped if we stop or slow down trade,” she says.

Nguyen compiled data on attitudes toward trade in the study countries, including his native Vietnam. He had researched and written a paper on international market influences in Vietnam with Pavcnik as an adviser, so he was familiar with the data and sources and could contribute analysis in conversations with Pavcnik.

“That was cool for me because Professor Pavcnik gave me a lot of freedom as to how I could proceed. It was a really good exercise in getting some insights into how research at that level is conducted,” Nguyen says.

Dong sorted, organized, and reorganized the raw data into a tables and graphs, some of which ended up in the final paper.

“It’s really rewarding to see my contribution in the actual work. In her paper, you can see one of the graphs that I worked on in the appendix, and I was just like, oh, there it is. Janet Yellen looked at that,” Dong says.

And throughout the process, Pavcnik always made Dong feel like her work mattered, she says. “Professor Pavcnik was with me every step of the way, and if I didn’t understand something, then I was really comfortable asking her about it. And the other thing that was really amazing was that she asked me to come to her office a lot of times to talk about the research. That made me feel like I had a very personal connection with the work, so in a lot of ways she was my supervising professor but she was also my mentor.”

Snyder says opportunities like this are rare for undergraduates, but not at Dartmouth.

“At small colleges where students might be working closely with faculty, it is rare to see the faculty operating at the cutting-edge of their field as Nina and many of my colleagues do. At top research universities at the cutting edge, undergrads tend to be walled off from the faculty outside of the lecture hall. Dartmouth is perhaps unique in its ability to integrate undergrads into faculty’s world-changing research. This is not an easy thing to do,” Snyder says.

Nguyen says that is what attracted him to the College.

“This sort of research experience is really what I think of when I think about Dartmouth. I’m just really happy to be part of professor Pavcnik’s work,” Nguyen says. “This was an experience where I learned a lot and I was able to help out on projects that made a difference.”