President Hanlon said the College is “a community that values and is strengthened by our diversity.” 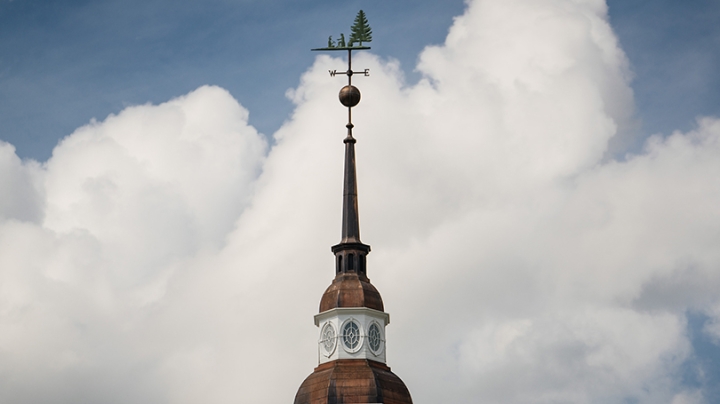 Following the announcement today of President Donald Trump’s decision to end the program that shields young undocumented immigrants from deportation, the Deferred Action for Childhood Arrivals, also known as DACA, College President Phil Hanlon ’77 strongly asserted Dartmouth’s commitment to all members of the College community, regardless of their citizenship.

In an email today to faculty, students, and staff, Hanlon wrote, “Since my very first campus communication on the matter last November, Dartmouth, as an institution, has repeatedly made it clear that we view the continuation of DACA as both a moral imperative and a national necessity. We are a community that values diversity with the knowledge that it significantly enhances the quality of an education and DACA therefore is a contributing factor to the success of the College.”

He said that College officials would advocate for DACA or a new piece of legislation “that would ensure that those who were brought to this country as children and had obtained legal status under DACA can continue to pursue their studies freely and without fear.”

“It is our sincere hope that Congress recognizes that these individuals embody the determination, drive, and diversity of human talent that make the United States prosper. Our legislators must find a solution that upholds these fundamental values,” Hanlon wrote.

On Sept. 1, Hanlon wrote to President Trump, asking him to continue DACA in its current form and to do everything in his power to defend the program. Hanlon said he is deeply disappointed that this did not happen.

“Given that most of these students came to our country as young children, America is the only home they’ve ever known. To deny them the opportunity to continue to advance their studies is to deprive our country of the innovation, determination and diversity of human talent that make America the greatest and most prosperous country in the world,” Hanlon wrote.

“The undocumented members of our academic community are not only outstanding students; they are exceptional individuals who have persevered through unprecedented challenges in pursuit of excellence in higher learning with the goal of making positive contributions to society as future leaders in their fields. The availability of a legal status through DACA has allowed them to pursue these goals freely and without fear as active, engaged and upstanding members of our communities and positive contributors to our state and local economies,” he wrote.

Hanlon has long stressed that the Dartmouth community is enriched by the diversity of the women and men who study and work on campus.

“Members of our community have worked hard in the last year, including through our Inclusive Excellence initiative, to make Dartmouth an open and welcoming place for all people. We can better understand our world, and we can achieve the best educational outcomes for all, because we are a community that values and is strengthened by our diversity,” said Hanlon.

The College admissions and financial aid policies do not consider domestic applicants’ immigration status. And once matriculated, undocumented students at Dartmouth receive support from faculty and staff in a number of departments, including the pluralism and leadership office, the undergraduate deans office, and the visa and immigration services office.

Dartmouth has long supported undocumented student members of the College community, known nationwide as Dreamers. The College was one of the few universities to file a friend-of-the-court brief with the U.S. Supreme Court in March 2016 supporting the expansion of DACA.

And, for two years, members of the student group Dartmouth CoFIRED (Dartmouth Coalition for Immigration Reform, Equality, and DREAMers), helped by expert guidance from the Dartmouth library staff, worked to win a national victory in 2016 when the Library of Congress agreed to change the way it catalogued holdings that refer to noncitizens, and to stop using the subject heading “illegal aliens.” The decision was reversed several months later by Republicans in the House of Representatives.

Dartmouth has stood with other universities in challenging earlier decisions by Trump on immigration. This past February, the College was one of 17 institutions filing an amicus brief in support of international students and scholars in a case challenging Trump’s executive order restricting immigration from seven designated countries and suspending refugee entry to the United States.