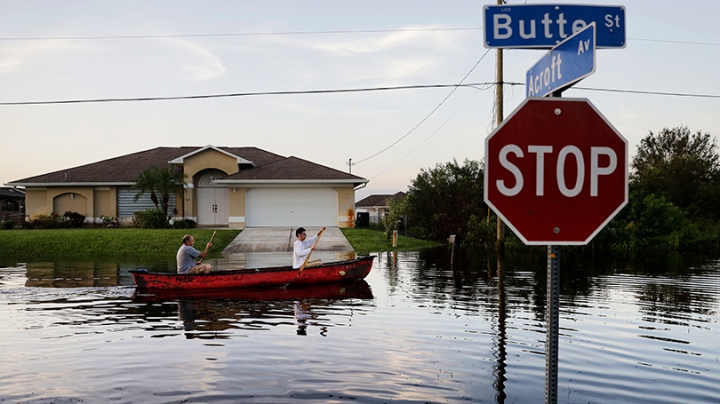 Residents of Fort Myers, Fla., paddle though floodwaters in the aftermath of Hurricane Irma. The storm was crossing Florida as Professor Frank Magilligan lectured on hurricanes, adding a sense of urgency for his geography students, including a student from Fort Myers. (AP Photo/David Goldman)
9/26/2017
Body

Two hurricanes of historic proportions overtook Professor Frank Magilligan’s first “Geography 3” class of the term, providing an epic case in point for his overview of “The Natural Environment.”

Harvey had rained down an estimated 27 trillion gallons on Houston less than two weeks before, and Hurricane Irma was slamming the west coast of Florida even as Magilligan’s students were finding their seats in the Steele Hall classroom.

The first class is normally a broad overview of the materials to be covered during the term, highlighted with a few examples of natural events from recent history, said Magilligan, a professor of geography and the Frank J. Reagan ’09 Chair of Policy Studies. In prepping for this class, he had been furiously downloading images and satellite animations of Harvey. Then Irma cropped up and broke the record for consecutive hours as a Category 5 hurricane just a day or two before his introductory lecture, sending Magilligan into a scramble to update.

“I’d been downloading hundreds of images. I had this Harvey thing all set up. Then Irma showed up,” he said.

Magilligan welcomed his new students and introduced himself as a Brooklyn native and a fluvial geomorphologist, offering his students a chance to puzzle out what that means (roughly, the study of how the shape of the Earth is affected by rivers). Then he asked if there was anyone in class from Florida or Texas.

“How are you doing? What town?”

There was a murmur in the room when she answered, “Fort Myers,” which had taken a direct hit from Irma less than 12 hours before.

Biggs said her mother and sisters had headed to higher ground when a mandatory evacuation order was issued on short notice for Fort Myers and Cape Coral.  Everyone was safe, but at the time of the class, Monday Sept. 11, the power was still out and she had not been able to communicate with them for nearly 24 hours.

Biggs, a studio arts major who is minoring in human centered design, said she hadn’t expected a geography class to have such urgent relevance to her life.

“I was just interested in learning more about geography. The last class I took was human geography, and that was really interesting,” she said. “I didn’t realize that the first class would be about hurricanes, or really even modern issues. I thought it would be more theoretical.”

Magilligan presented an overview of the class with rapid-fire, deadpan humor, spinning through the major concepts to be covered and details of the class and labs. By the time he returned to the topic of hurricanes, he had everyone’s attention.

What made Harvey and Irma unusual, he said, was that two storms of such size and force arrived in such rapid succession, and the fact that they maintained their strength as they made landfall.

“Generally, as hurricanes start to get close to landfall, they lose that intensity. What really drives these hurricanes is sea surface temperatures,” Magilligan said. “In fact, what set the table for these storms was that the Gulf of Mexico never went below 73 degrees this winter, for the first time in recorded history.”

Irma weakened over Cuba, but then gained strength again, becoming a Category 4 storm over the water between the island and the Florida Keys, he said, showing a deep red heat map of the waters of the Gulf of Mexico and the Caribbean. “That is surprising. It’s only 100 miles. People try to swim that.”

Harvey also illustrates this point, he said. As the Category 4 hurricane moved over the Texas coast, a high-pressure system held it in place with the back end of the storm churning over the Gulf. In this holding pattern, Harvey essentially pumped water directly from the Gulf of Mexico onto Houston and the Texas coast for four days, producing more than 52 inches of rain.

“What do we get in Hanover?” he asked the students, eliciting a long pause. “Excellent, 38 inches,” he said, answering his own question. “Over what period?” pause, “A year. Good,” answering himself again. “So, Houston got 16 months of our precipitation in roughly four to five days. That is, as we say in fluvial geomorphology, a boatload of water. That is a lot of water with nowhere to go.”

The unprecedented number of powerful hurricanes this season—which have continued with Juan and Maria—can be definitively linked to higher sea surface temperatures, said Magilligan, whose widely cited work includes a study of the effects of Tropical Storm Irene, which brought flooding and heavy damage to Vermont in 2011.

“Weather and climate are difficult to correlate, but the sea surface temperatures are certainly going in a direction that you would anticipate with a warming climate,” he said.