House Communities Welcome the Class of 2021

In a week of orientation, first-year students find community. 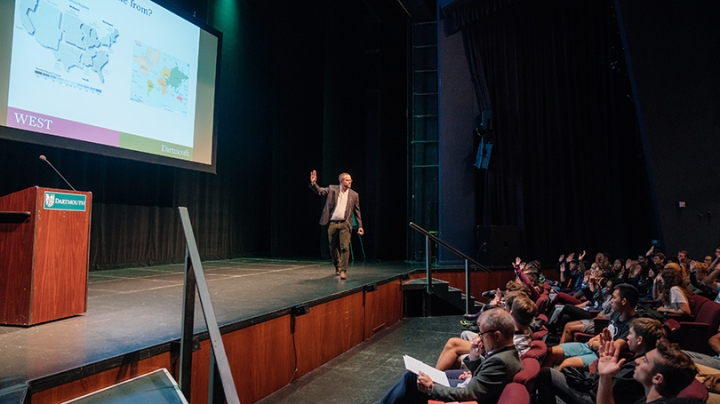 “Welcome, Class of 2021. How are you doing?” says Ryan Hickox, an associate professor of physics and astronomy and the house professor of West House, one of Dartmouth’s six house communities.

It’s Wednesday morning, and Hickox is in Moore Theater in the Hopkins Center for the Arts, speaking to West House’s newest arrivals.

This is their first full day of orientation, focused on academic advising and the curriculum. On Tuesday afternoon, the ’21s convened as a class for the first time, for a formal welcoming ceremony called “First Meeting of the Class of 2021: Your Community, Your Class, Your Words.” Also attending the ceremony were President Phil Hanlon ’77, Dean of Faculty Elizabeth Smith, Dean of the College Rebecca Biron, Vice Provost for Enrollment and Dean of Admissions Lee Coffin, Alumni Council President Elect Tee Lotson ’82, associate deans of the faculty, and house professors, all in full academic regalia.

In addition to remarks, the program ends with “Your Class, Your Words,” a spoken-word performance designed to get the new class and transfer students thinking about the diversity of their class and the Dartmouth community as a whole. Read by student actors, it celebrates the identity of the incoming class, using as its script a collection of quotations from the admissions essays of the new students.

The ’21s are the second matriculating class to participate in the residential living system established in 2015 as part of the College’s Moving Dartmouth Forward initiative. Each house—Allen, East Wheelock, North Park, West, School, and South—consists of a cluster of residential buildings and a faculty residence nearby. (Students may also opt to live in one of several living learning communities based on affinity and interest.) The ’21s live in first-year residence halls with Undergraduate Advisers (UGAs) and classmates from the same house, and join fellow undergraduates as well as graduate, and professional students, their first-year faculty advisers, and affiliated faculty and staff as members of their House Communities.

“New students are attending many of our academic and community-based orientation sessions by House, and are already beginning to bond,” says Biron. ”We’re thrilled to see these connections between living and learning at Dartmouth become stronger than ever before.”

In Moore, Hickox is introducing himself and West House, starting with an extreme macro view: a quick lesson about the supermassive black hole at the center of the galaxy Centaurus A. “I’m a house professor, but my other job is that I teach and I do research in the field of astronomy,” he says. “So why do I bring this up? Well, partly because I think it’s interesting and I like to talk about it.

“The other reason I bring it up is that many of us wear many different hats. As you go through your Dartmouth experience, you’re going to get really, really excited about a number of things like this that are just amazingly interesting and wonderful, and you’re going to want to share that with your friends. So I want you to look around at the people who are in this room with you. These are your fellow West House members who will be on this journey with you for the next four years.”

Hickox hands the stage over to Russell Muirhead, the Robert Clements Professor of Democracy and Politics and a professor of government, to talk about “what a liberal arts education is—what it is that you’ve signed up for.”

Studying the liberal arts has deep benefits, Muirhead tells the students. “The point of this education is to rekindle that desire to know—to reacquaint you with the satisfaction that comes from satisfying your own natural curiosity,” he says.

“If you do access that, it will change you forever. It will fundamentally, permanently transform your life. Will it make you powerful and rich? It might, because someone who has the vitality that comes with having genuine desire to understand and the ability to satisfy that desire can work very, very effectively in the world. But that’s not its direct object.”

In the final part of the session, Hickox explains some of the nuts and bolts of Dartmouth’s course schedule (noting, for instance, that a class slated for a “12 hour” actually starts at 12:50 p.m.), distributive requirements, major selection (“Something like 75 percent of the students here end up majoring in something different from what they thought”), and grades (“Most of you probably didn’t get a lot of Bs in high school. A lot of you are going to here, and that’s all right”).

After dismissing the students to their next meeting, Hickox reflects on the first year of the house system and looks ahead to year two. “The thing that I’m most excited about this year relative to last year is that one of the fundamental motivations for the house communities—continuity—is really going to kick in in earnest now.”

He and the other house professors will continue to involve faculty, staff, and graduate students in house gatherings and events. “Having the opportunities for informal engagement between students and others in the community in a really active way is something that Dartmouth can maybe do better than anybody else,” he says.

The goal for the week of orientation, Hickox says, is for members of the Class of ’21 to feel that they’re part of a vital community. “Everybody in this community is welcome, no matter what,” he says.

On Saturday night, the ’21s will “sweep” to their House Professors’ homes to sign their house ledgers. Sunday morning, President Phil Hanlon ’77 will greet each new student in a brief matriculation ceremony in Parkhurst. That evening they will participate in a twilight ceremony, walking with candles as a class from the Collis Center to the Bema to mark the end of orientation and the beginning of the new academic year.

On Monday, the first full day of classes, the entire community is invited to the annual picnic lunch on Tuck Mall at noon.