‘A Place for You Here’: Employee Networks Build Community 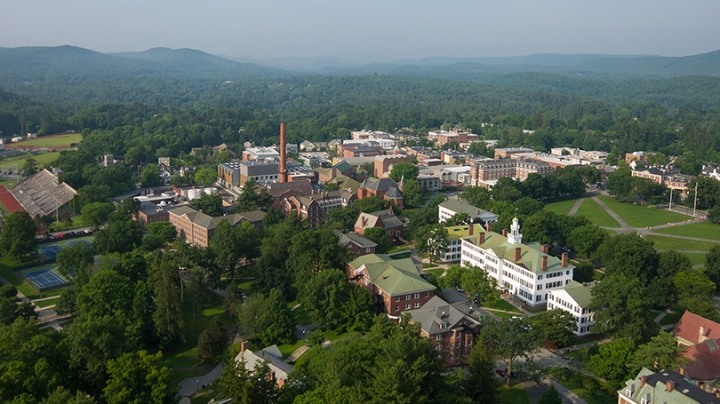 When Steven King moved to Hanover from New York City for a job in the Office of Residential Life three years ago, he was looking forward to the small-town pace of life he remembered from growing up in the Adirondack region of upstate N.Y.

But as a single gay person moving to the Upper Valley, the transition wasn’t easy at first, he says. Unlike Manhattan, where “there are all kinds of things you can do to connect with a community of your choosing, in a rural place like this, that doesn’t really exist as much.”

So King, who now directs the Student Organization Accountability Program, was glad to learn about Dartmouth’s LGBTQIA+ Network, for which he now serves as co-facilitator. The group is one of eight College-supported employee resource networks (ERNs), affinity groups that help build community among underrepresented staff, faculty, and their families.

In addition to the LGBTQIA+ network, ERNs currently include the Asian and Pacific Islander Caucus, Black Caucus, EmpowHER (for women of color), International Employee Network, Latinx Hispanic Council, Native American Council, and Veterans Network. The groups organize social events throughout the year, from after-hours gatherings and weekend trips to community service activities throughout the Upper Valley and an annual softball game for all ERN participants. Some of the groups also offer professional development opportunities and mentorship for new employees.

“The retention of diverse staff is the foundation for building a strong and welcoming community for all Dartmouth employees,” Ellis says. “Our employee resource networks are designed to provide the safe spaces, occasions, and opportunities for diverse staff members to engage each other about their professional and personal lives while connecting them closer to Dartmouth and the Upper Valley communities. Anything we can do to help diverse populations avoid the isolation that can occur in this community is an investment in a strong and innovative workforce for the future.”

Theodosia Cook, the director of equal opportunity and affirmative action, who serves as ERN liaison with the Office of Institutional Diversity and Equity, says ERNs follow a successful model found in the corporate world.

“It’s known to work as a retention tool for keeping employees who bring a different aspect of diversity than the composite that you have at your particular institution,” Cook says. “Here at Dartmouth specifically, it came from the employees wanting it to be here and cultivating it, and then our office realizing that we should support this.”

For several years, the ERNs operated on a shoestring budget. But in 2016, as part of the Action Plan for Inclusive Excellence, the College increased its support for ERN activities to $60,000 a year.

The new funds are making a difference, says Brandea Turner, senior events manager at the Hopkins Center for the Arts, who is a member of the Black Caucus planning committee and also affiliated with EmpowHER.

“It was nice this past year to actually have a set sum of money so we could just plan what we needed to plan throughout the year,” Turner says. “We were able to do some fun things—we had a roller skating night, and we were able to buy tickets for members to see a performance at the Hop. I feel like there’s definitely still progress that needs to happen, but we are moving in the right direction.”

Cook, who is affiliated with Black Caucus and EmpowHER, says ERNs help build community across a decentralized campus that can sometimes leave employees feeling isolated in their workplace. “In offices I’ve worked in, I may be the only person of color. And I’m not just a person of color, I’m an immigrant as well. And I’m not just an immigrant, I’m also a woman,” Cook says. “When I think about what does it mean to be a person of color in this community, and how do I grow professionally—who can give me that perspective?”

King says when he learned of the LGBTQIA+ Network three years ago, the group was struggling because of personnel changes. So he and a handful of other members decided to rebuild it, expanding the email list and getting news of events out through Vox Daily and word of mouth.

“Now we have a solid group of people that come to each of our events, and our listserv is pushing 80 people,” he says. “Not everyone comes to things, but just knowing that this exists out there is helpful in many ways.”

Connections That Make a Difference

Turner and King say participating in ERNs has broadened their connections across campus. “I’ve met folks through this that I never would have met otherwise—our work would never have crossed paths. Friendships have come from this, and even collaborations,” King says.

“It’s neat to meet people who work in admissions and the Rockefeller Center, and people who are doing research,” Turner says.

And those connections make a difference in Turner’s own work, for instance, when she needs to find student workers for the Hop. “When I’m looking for students to hire, I’ll reach out to some of those people across campus and say, hey, do you have any students looking for a job? So it’s been very helpful with my own job.”

Though the primary goal of ERNs is to support staff, the groups are also having a positive impact on students, Turner and King say.

For example, last year on National Coming Out Day, the LGBTQIA+ Network sponsored a panel for a student event about coming out. “Lots of especially first-year students came,” King says. “They shared that it was impactful to see faculty and staff as out professionals, doing their work here. And having students know that this network exists here is a nice thing—they can see, ‘OK, there’s support here for the folks who are supporting me.’”

The Black Caucus has participated in similar student events. For example, members were invited to a recent mixer for African American students. “It’s helpful for the students to know, hey, there’s people on this campus that look like you that you can potentially connect with,” Turner says.

Cook says ERNs are also providing leadership opportunities for staff who don’t necessarily have leadership responsibilities in their current jobs. “ERNs give people a space to showcase their leadership skills—managing people, managing the finances, putting together events. The fact that they’re doing all that on such a high level impacts the institution’s goals and mission. That has been a wonderful thing.”

King and Turner say ERNs have made a positive difference in their experience of Dartmouth and that of their friends and colleagues.

“I think this work is important,” says King. “I think the fact that these networks exist means something, and is important to folks who are coming here. It’s saying to people, ‘There’s a place for you here.’”