The art historian is helping to stage an exhibit on Orozco’s “Prometheus” mural. 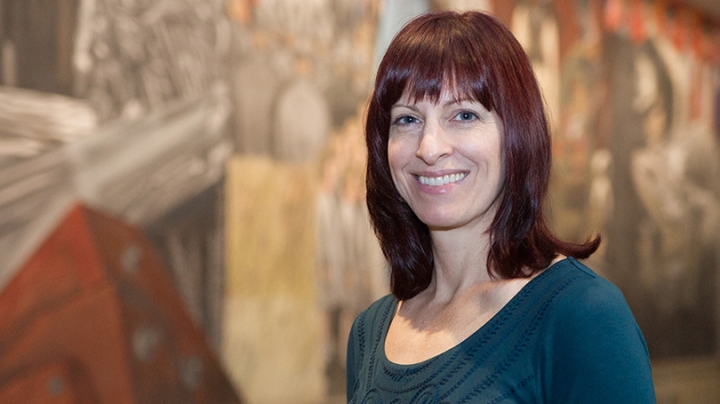 Mary Coffey is an associate professor of art history and an expert on 20th-century Mexican muralists, including Orozco. (Photo by Eli Burakian ’00)
9/06/2017
Body

Every Dartmouth student knows The Epic of American Civilization, the massive mural cycle painted in the early 1930s by José Clemente Orozco in the lower level of Baker-Berry Library. Its panels of myth and conquest, violence and the transition from pre-Columbian to modern civilization have kept watch over generations of undergraduates studying in the reserve reading room.

But fewer know that Dartmouth’s mural has a counterpart on the other side of the country. In 1930, before he ever came to Hanover, Orozco—still a relatively unknown artist—completed a commission in the dining hall at Pomona College in Claremont, Calif.

“Going to California, you get to see where Orozco started and appreciate how he developed as an artist,” says Mary Coffey, an associate professor of art history and an expert on 20th-century Mexican muralists, including Orozco.

In Prometheus, which depicts an iconic figure from Western mythology, Orozco was “still operating within a Western art historical framework. And then he comes to New England and the Conquest and indigenous civilizations come to the fore in his work in a way that they hadn’t up to that point,” Coffey says.

This month, Coffey and colleagues at Pomona are curating an exhibition of contemporary Mexican women artists whose work responds directly and indirectly to Orozco’s Prometheus. The exhibition is part of a much larger series of exhibits—the J. Paul Getty Museum’s Pacific Standard Time: LA/LA, which focuses on Latin American and Latino art in the context of Los Angeles—running from September to January 2018 at more than 70 venues.

“We’re hoping this exhibition brings fresh eyes to the Prometheus mural and allows it to function as a kind of contemporary point of reference, the way the Dartmouth mural functions,” says Coffey, who will be giving a gallery talk at the Pomona College Museum of Art at 7 p.m. on Sept. 7.

At Dartmouth, Coffey says, students “often cite our mural in their political activism. People get that this mural has something to say to us today. I think the Prometheus mural does, too, but people haven’t looked at it that way—haven’t thought about it as a point of reference for the contemporary world.”

The exhibition includes artists who share thematic interests with Orozco—“fire as a creative and destructive force, an interest in mythology and esoterica,” Coffey says.

For example, Isa Carillo uses palm readings, astrology charts, and other esoteric traditions to symbolically explore Orozco’s life. Adela Goldbard uses installations and pyrotechnic piñatas to explore contemporary political violence in Mexico. Conceptual artist Rita Ponce de León has created a work based on a series of facilitated conversations among Pomona students about Prometheus, art, and politics that she used to make a dialogic chain of images, which she then painted on the museum walls. Naomi Rincón-Gallardo uses costumes, music, and video to explore the myth of Epimetheus, Prometheus’ brother, who is a kind of antithesis of Prometheus’ rationality.

“We selected each of these artists because something about their work seemed to resonate with the themes that were preoccupying Orozco when he was exploring the Prometheus myth,” Coffey says. Each artist’s work will be displayed at Pomona College Museum of Art, a five-minute walk from the dining hall where Orozco’s Prometheus presides.

The exhibition is meant to challenge the meaning of Prometheus today, she says. “When Orozco was painting in the 1920s, it was a male dining hall—women weren’t even allowed to eat there. Now it’s a coeducational dorm and dining room, and has been for several decades. The demographics of the campus have changed dramatically over the last hundred years, particularly with respect to racial and ethnic minorities, and it’s a campus that has more women than men at this point. So even though the mural is the same, everything about the way we experience the mural has changed, because we’ve changed.”

Coffey herself is at work on a book about Orozco and Dartmouth’s Epic of American Civilization, which was declared a national historic monument in 2013 and is preserved at Baker-Berry Library thanks to funding from the Manton Foundation.

“I started writing this book five or six years ago, and it’s only increasingly relevant as I wrap it up as we’re confronted with the closing down of immigration and xenophobia and hyper-nationalism—all of the same kinds of discourses and fears that were pressing when Orozco was painting,” she says.