Rauner Acquisition Showcases How We Tell Stories About War

The library has purchased an 1866 edition of American Civil War photography. 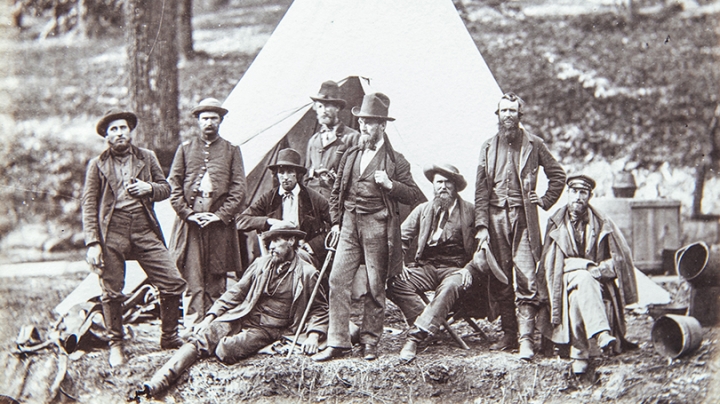 One of the photographs by Alexander Gardner from Rauner’s new acquisition. (Image courtesy of the Rauner Special Collections Library)
9/12/2017
Body

American Civil War scholars and early photography aficionados take note: The Rauner Special Collections Library has acquired an 1866 edition of Gardner’s Photographic Sketchbook of the War—a two-volume album of 100 original photographic prints of the American Civil War published by Alexander Gardner, a 19th-century photographer who worked with his more famous contemporary, Matthew Brady, before setting up his own studio in Washington, D.C., in 1863.

You’ve probably seen some of these images: mist rising over dead soldiers on the Gettysburg battlefield; President Lincoln standing a full head above General McClellan and his officers at Union headquarters at Antietam. Many more are less familiar, but together they shed light on how the historical narrative of the conflict was being constructed even in the early post-war era.

“It’s an important moment in the history of photography, where photographs are becoming a way we tell stories about war,” says Mary Coffey, an associate professor of art history.

When Special Collections Librarian Jay Satterfield reached out to library colleagues, faculty members, and Hood Museum of Art curators about purchasing the book, he says, he’d “never gotten such an enthusiastic response to a possible acquisition.”

So enthusiastic, in fact, that Satterfield and four professors in art history, English, and history who regularly teach the Gardner sketchbook in classes are collaborating to host a Sept. 25 symposium to celebrate the Sketchbook’s arrival at Dartmouth. The faculty include Coffey; Colleen Boggs, a professor of English; Robert Bonner, a professor of history and the Kathe Tappe Vernon Professor in Biography; and Katie Hornstein, an assistant professor of art history.

“We were all immediately drawn to the idea of celebrating the acquisition because we use it in our teaching so much,” says Coffey. “It is such an important document, and to have one in our collection is a true gift.” 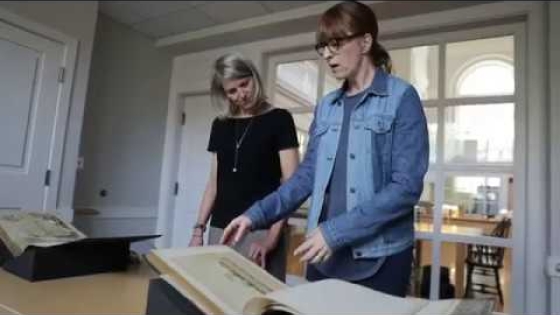 Boggs, who teaches a course on the literature of the American Civil War and often takes students to Rauner to use the collections, says it’s difficult for reproductions to do justice to Gardner’s book. “The Sketchbook is really a work of art in and of itself that I think will be exciting for students to encounter.”

Bonner is looking forward to incorporating the original Sketchbook into his “American Civil War” class. “Especially with this early photography, it’s remarkable for students to move from reproduced material, into the actual artifact itself,” Bonner says. “You just have a different sensibility, a different relationship to it, knowing this was produced in the 1860s.”

Coffey has also taught the Sketchbook in classes, using digital images. “I do a whole class period in my ‘American Art and Identity’ class on Civil War photography because it’s a key moment in the history of photography. It’s one of the first conflicts to be extensively photographed,” Coffey says. Now she’ll bring her students to Rauner to see the original.

“Students love being able to go into Rauner and the Hood Museum and have access to these important artifacts and objects and works of art,” she says. “Rauner is nice in that you can touch the materials. It’s an opportunity that brings to life a subject that’s being addressed largely through text and slide presentation, and that tends to wake them up a little and get them excited.”

Among the things students may experience when they encounter the Sketchbook in person, rather than in a reproduction, are its large size and ornate presentation. “It’s bound in leather, embossed with a kind of gold emboss, with marbled end papers, and every photograph has been pasted hand-pasted onto each page, with a caption,” says Coffey. The book was expensive for its time—$150—and clearly intended for an affluent Northern audience.

“And it’s not only photos, which of course everyone initially thinks about, but it’s also the text that accompanies the photos,” Boggs says. “The text and photos are entering into really interesting relationship to one another. One of the questions then becomes, do we read them separately? Do we read them conjointly, with them commenting on one another? What can be done in the text that can’t be done in the photographs?”

The purchase of the Sketchbook is a good example of how Rauner’s staff thinks about acquisitions, Satterfield says. When he and his colleagues decide what to add to the library’s collections, they specifically look for items that support teaching and learning.

“We look for objects that are multifaceted—that can appeal to a lot of different classes and to a lot of different faculty interests,” Satterfield says. “We brag all the time that there is something in the collections here that will make any class taught at Dartmouth more interesting. We see our mission as being the center of the intellectual life of the College, and we want to integrate ourselves as completely as possible into the curriculum. Acquisitions like this go a long way towards that.”

Part of the Sketchbook’s appeal is the way it fits into the library’s strengths, Satterfield says. “We have a rich context of primary sources—letters, diaries, those kinds of things—from the Civil War in our collections, but we also have a rich collection of literature produced during and in response to the Civil War—Walt Whitman’s Drum-Taps, for instance. And we have really strong photography collections here. So this is not an object that will be by itself. It’s coming into a place where it can be juxtaposed with a lot of different kinds of things to create new meanings. It’s enriching a collection and also being enriched by a collection.”

It’s not only Dartmouth students and faculty who will benefit from the purchase, Satterfield says. “Rauner is a resource for the world-wide scholarly community. This copy had been in private hands, so having another copy of this that’s open for research use is a big deal not just for Dartmouth, but for people who study this.”

The library was able to acquire the book thanks to a bequest for special acquisitions made by Hans Penner, who taught in the Department of Religion for more than three decades and served as dean of the faculty of arts and sciences in the early 1980s.

The fund, Satterfield says, gave him the ability to act quickly when he saw the book come up for sale. “In the rare book and manuscript world, you have to be able to react to the market—you don’t know what’s going to come for sale in any given year. So we need that kind of flexible funding.”

“I can’t tell you how grateful I am to Penner and his family for this,” says Satterfield. “This is the kind of thing that is going to impact students’ lives at Dartmouth for generations.”

The symposium, “Civil War Object Lessons: Gardner’s Photographic Sketch Book of the War as Relic, Monument, and Narrative,” will take place 12:45 p.m. on Sept. 25 in Haldeman 41. The event is free and open to the public.