Research links cortical thinning over time to the ability to consider others’ intentions.

When it comes to the concept of fairness, teenagers’ ability to consider the intentions of others appears to be linked to structural changes in the brain, according to a study led by Assistant Professor of Psychological and Brain Sciences Luke Chang.

The research found that cortical thinning of specific areas of the brain from youth into young adulthood corresponded to the transition from an emphasis on equality in all transitions to a more complex consideration of the intentions of others in exchanges. This developmental change in the social brain continued through late adolescence, the researchers said.

“We were surprised that this shift in preference for considering others’ intentions occurred so late in development,” Chang says. “This finding has potential implications regarding how much autonomy this age group should be given when making important social and ethical decisions, such as purchasing weapons, going to war, and serving on juries.”

The study is the first to provide evidence linking structural changes in the brain with behavioral changes within the context of fairness concerns, the researchers said. The research, conducted in part at Dartmouth’s Computational Social Affective Neuroscience Laboratory (Cosan Lab) in the Department of Psychological and Brain Sciences, was published in the August edition of Scientific Reports.

For the study, participants ages 9 to 23 took part in a game based on the exchange of money. “Proposers” selected between two divisions of $10, and “responders” decided whether to accept or reject the division. Researchers evaluated how participants used two different cognitive strategies when making their decision using computational modeling, and then investigated how these processes correlated with measurements of participants’ cortical thickness, as obtained through magnetic resonance imaging (MRI).

Younger players tended to want to minimize the difference in the division of the money so that everybody ended up with the same amount, but the older players were more inclined to consider the other player’s intentions. This shift coincided with cortical thinning in the brain, specifically, in areas of the dorsomedial prefrontal cortex, which is involved with how we view others’ mental states, and posterior temporal cortex, which is involved in visual perception particularly in processing facial information, the researchers found.

“This work provides converging evidence in line with other research that the computation of inferring intentions is processed in the dorsomedial prefrontal cortex,” Chang said.

The study was coauthored by Chang and Sunhae Sul, a professor of psychological science at Pusan National University in South Korea. Sul was a postdoctoral student at Dartmouth’s Cosan Lab at the time of the study. Berna Güroĝulu and Eveline Crone, who are affiliated with both Leiden University and the Leiden University Medical Centre in the Netherlands, also served as co-authors. 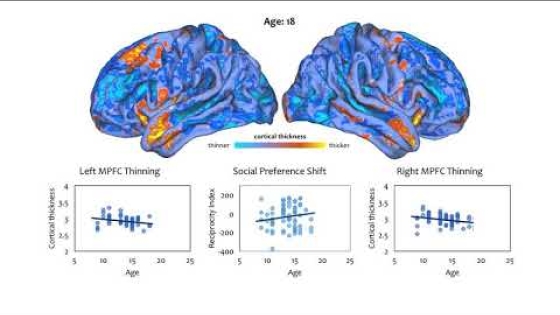