President Hanlon: “Dartmouth is an institution taking on some of the world’s most pressing challenges.” 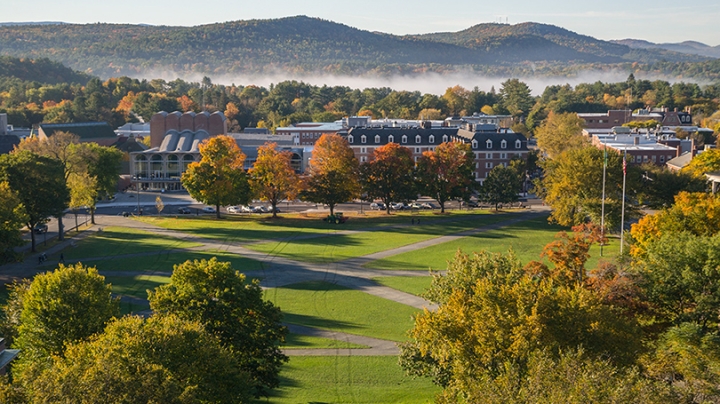 The inaugural director of the Arthur L. Irving Institute for Energy and Society and the new director of the Norris Cotton Cancer Center shared their visions for interdisciplinary collaboration with members of the Dartmouth Board of Trustees this weekend. The trustees were in town for their annual September meeting.

“Dartmouth is an institution taking on some of the world’s most pressing challenges, challenges such as preventing and curing cancer and driving change in the intelligent production, supply, and use of energy,” said President Phil Hanlon ’77. “The work of Dartmouth’s centers and institutes concentrates interdisciplinary efforts toward those goals, attracts talented faculty and students, and helps to prepare tomorrow’s leaders in those fields.”

Elizabeth Wilson, a professor of environmental studies, is leading the Arthur L. Irving Institute, and Steven Leach, a professor of molecular and systems biology, is the new head of the cancer center. Both began work early this month. Each spoke to trustees about the opportunities presented by Dartmouth’s size and scale to work collaboratively with students and faculty, across multiple disciplines, on complex problems.

“Like the Cancer Center, the Arthur L. Irving Institute has the potential to be a catalyst for research, teaching, and practical solutions to vexing problems based on collaborations from every corner of campus,” said Wilson. “We will be translating theory into practice in a way that has real impact in the classroom and beyond.”

During a luncheon in Alumni Hall, trustees honored Dartmouth faculty who have received prestigious external awards, highlighting their academic contributions. “Dartmouth prides itself on its unique teacher-scholar model,” said Provost Carolyn Dever. “These faculty exemplify our highest values of scholarship, creativity, and discovery.”

The trustees also spent a morning with deans, other academic leadership, faculty, and students taking an in-depth look at some of Dartmouth’s most ambitious academic and residential initiatives. Several board members also participated in a panel for Class Officers Weekend as part of their continued outreach to alumni.

The co-chairs of the Task Force on Undergraduate Enrollment Scale, Dean of the Faculty of Arts and Sciences Elizabeth Smith and Dean of the College Rebecca Biron, discussed the task force’s work to explore how the College could implement expansion of the student body.

Biron also spoke with trustees about residential life and student housing, progress on which are key pillars of the Moving Dartmouth Forward plan.

Board members also received updates on a number of construction projects that are in the planning stages or under consideration, including the demolition of Gilman Hall, early designs for the Arthur L. Irving Institute building, the renovation of Murdough Hall, and the potential construction of new residence halls.

Also at the meeting, trustee Bill Burgess ’81 was elected to be a board vice chair and James Coulter ’82 was re-elected vice chair.