“Hand washing is a global health solution that has been vastly overlooked,” says Sydney Kamen ’19. 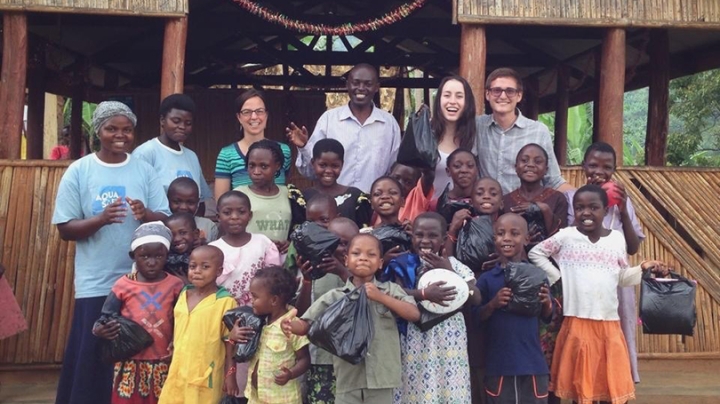 Sydney Kamen ’19, back row, second from right, helps lead a health workshop in Eastern Uganda, where children were given soap and taught to wash their hands. (Photo courtesy of Sydney Kamen ’19)
9/21/2017
Body

Hand washing saves lives. That’s why Sydney Kamen ’19 founded a nonprofit organization that recycles used soap from hotels and distributes it to under-resourced communities around the world.

Her advocacy work has won accolades, including the 2017 Tikkun Olam (Repairing the World) Award from the Helen Diller Family Foundation, the Prudential Spirit of Community Award, the Daily Point of Light Award, and the Robert Sheppard Leadership Award. Her work has also come to the attention of People magazine, in an article and video interview.

Kamen says she’s grateful for the public attention, but wants the spotlight to be on the problem she is trying to solve. “Over 1.8 million children die every year from diarrhea,” she says. “But mortality from infectious diseases can be cut in half through handwashing and by improving basic hygiene.”

Yet in many parts of the world, soap is scarce. Kamen first saw that for herself when, as a high school student, she got a scholarship to study vulnerable youth in rural Thailand. Her host was a nurse practitioner in a small village.

“Many of the children in her clinic didn’t know how to wash their hands,” Kamen recalls. “And they didn’t have soap.”

In Kamen’s Georgetown neighborhood of Washington, D.C., “there are bars of hand soap and hand sanitizers everywhere, and not having access to those things was a foreign concept.”

It was also a call to action. With the nurse’s help, Kamen found hotels in Thailand that were willing to collect shards of soap left behind by guests. She also found artisans interested in recycling those remnants into new bars, which are distributed, through the clinic and other venues, to people who need them.

That was the first step in launching her nonprofit, “So Others Are Protected,” or SOAP. The network has grown to include 13 hotels partnering with 14 communities in six countries: India, Thailand, Rwanda, Myanmar, Uganda, and Kenya.

Kamen doesn’t do this work from a distance. She has traveled to each of these nations, forming personal relationships with hotel personnel and community members. By forging alliances among local groups, Kamen not only promotes hygiene, she also helps to create jobs for the soap recyclers. SOAP trains local students to be “health ambassadors,” teaching and encouraging handwashing in their schools.

“Handwashing is a global health solution that has been vastly overlooked,” says Kamen, “maybe because it’s not a fancy medication or immunization or a surgical procedure. It’s a glycerin rectangle. So simple. But that’s what has made it so successful. SOAP is mobile and easily tailored to meet a community’s needs and desires.”

While Kamen started her nonprofit when she was still in high school, she says Dartmouth professors have helped her expand and strengthen it. Her primary mentors are Lisa Adams, MED ’90, associate dean for global health and director of the Center for Health Equity at the Geisel School of Medicine, and Melody Brown Burkins, GRAD ’95, ’98, associate director for programs and research at the John Sloan Dickey Center for International Understanding.

From Adams’ course, “Global Health and Society,” Kamen says she gained a more comprehensive understanding of “the moral dilemmas that come up in any global health work.” Burkins helped her set priorities and learn from mistakes, she says.

“Sydney wants to listen to people and work with them to create a better world and empower others,” says Burkins.

Adams says Kamen embodies “all the philosophies of global health equity that many of us working the field are trying to emphasize and teach. She’s working with local partners putting community needs at the center, finding local solutions to local problems. That’s one of the ways you achieve sustainability in this arena.”

Kamen combines her humanitarian work with membership in Dartmouth’s Reserve Officers’ Training Corps. She doesn’t come from a military background, but says she joined ROTC to get a perspective she would not otherwise have. The U.S. armed forces, she says, can be seen as “a humanitarian actor in the world.”

“It’s so easy to criticize the institution of the U.S. military,” Kamen says. “But what moral authority do we have if we don’t make an attempt to reach across the aisle and engage with it on a human and emotional level?”

This term, Kamen is doing a global health internship in the Washington, D.C., office of FHI 360, a human development organization that, according to its website, “improves lives in lasting ways” by advancing “locally driven solutions.”

After graduating as a geography major and ethics minor, she plans to work toward a master’s degree in public health, perhaps eventually pursuing an MD with a focus on global health.