Gifts from the Branca family and an anonymous donor establish the positions. 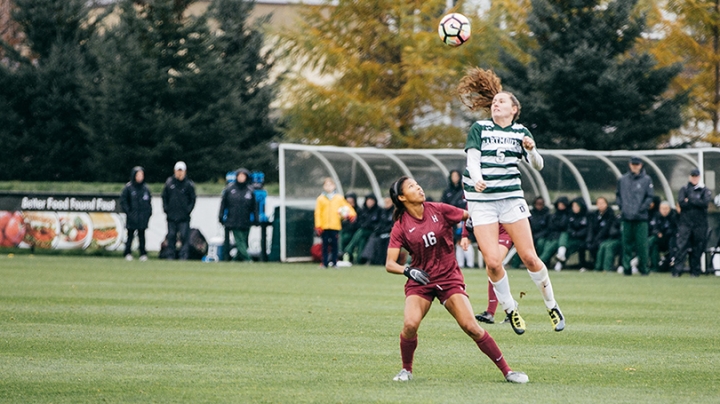 Stacy Smith Branca ’94, a captain of the 1993 women’s soccer team that swept its Ivy League competitors on the way to an NCAA tournament appearance, and her family have made a $2 million gift to endow the women’s soccer head coach position at Dartmouth.

The Stacy Branca ’94 Family Head Coach of Women’s Soccer is the 13th endowed position in the Department of Athletics and Recreation established since 2013. A second, new athletic endowment—a $1 million gift from an anonymous donor—will endow an assistant track and field coaching position, making it the 14th endowed position.

With these two gifts, the Dartmouth community has directed a total of $27.5 million toward endowed positions in athletics during the past four years. This effort is part of a strategy to raise Dartmouth’s athletic competitiveness, especially in three key areas: recruiting and retaining top-level coaching; enhancing athletic facilities; and supporting programs such as Dartmouth Peak Performance, which focuses on leadership and helps students achieve the highest levels of physical, intellectual, and personal growth.

As with previous coaching position endowments, the Branca family gift comes with deep gratitude and commitment to the importance of athletics in the lives of young people.

“My husband Nick and I were college athletes who came from middle-class families, and we had a lot of help along the way. So we’re big believers in giving back to our schools, paying it forward to expand opportunities for students, and leading by example,” says Stacy Smith Branca. “We chose to endow this position because soccer played such a significant role in my life. Participating in athletics develops character and leadership skills, and being on a team makes for powerful lifelong friendships.”

Barry Harwick, Dartmouth’s director of track and cross country and the Majorie and Herbert Chase ’30 Head Coach of Men’s Track and Cross Country, says he appreciates the gifts.

“Sandy Ford-Centonze, the Marjorie and Herbert Chase ’30 Head Coach of Women’s Track and Field, and I have always taken great pride in holding the first two endowed head coaching positions at Dartmouth, and we’re thrilled that our program will have the first endowed assistant coach position,” Harwick says.

“This past weekend, nearly 100 of our alumni were back on campus to celebrate Dartmouth’s Olympians and other world-class competitors, and it was terrific to be able to share this latest milestone for our program,” he says.

The two gifts, which were announced at the Dartmouth Athletics Advisory Board (DAAB) meeting in Hanover, will help the College attract and retain topflight coaches and also provide funding for equipment, travel, and other team expenses.

President Phil Hanlon ’77 emphasizes the long-lasting lessons of Dartmouth athletics for students and the community.

“Stacy was unable to play soccer in her junior year due to a serious injury and she became more of a team leader that season, attending every game and practice, cheering her teammates on, and assisting her coaches,” he says. “Today, she’s a leader in the alumni community—a Centennial Circle member, a Career Network volunteer, and a DAAB member—and we’re deeply grateful for her dedication to Dartmouth.”

Harry Sheehy, director of athletics and recreation, says the Branca gift and the other recently created endowments are providing flexibility and stability for the entire department.

“The impact of these endowment funds is being felt in very tangible ways,” Sheehy says. “We’ve hired 16 head coaches in the past four years, and many of them would not have considered Dartmouth without our ability to offer more competitive salaries made possible by these endowments. We’ve also been able to bolster our support for recruiting, equipment, and team travel in a number of sports.”

Rainey says the Branca gift will boost the women’s soccer team’s recruiting efforts and the College’s ability to attract and retain assistant coaches.

“It’s a tremendous honor to serve in an endowed position, and it’s especially meaningful that it’s being made possible by an alumna who was a captain of the team,” says Rainey.