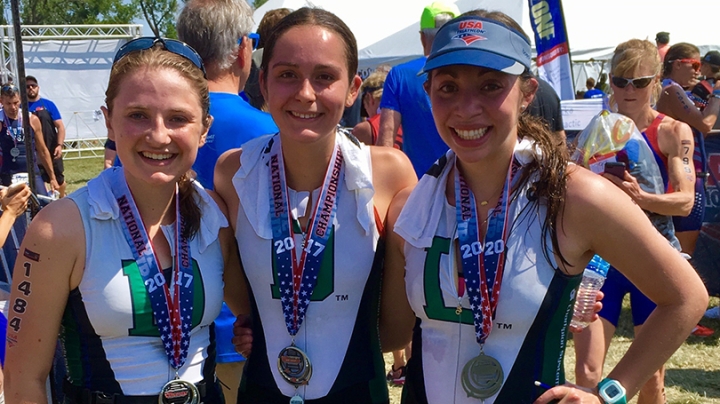 The triathletes who last month earned a chance to compete with Team USA in next year’s world championships have more than a 1.5-kilometer swim, 40-kilometer bike ride, and 10-kilometer run, to contend with. They have to balance a rigorous academic schedule at Dartmouth as well.

“We’re all new to triathlons,” says Clayton, who met Rowley when they both decided to give the sport a try in their freshman fall. “So, it’s incredible to have the chance to go to worlds in Australia. We all want to make sure scheduling works out, get our Team USA uniforms, and get the details worked out, so we can make the trip next September.”

In the meantime, the women plan to continue training and competing locally while pressing on with their academic careers. Rowley is pursuing a degree in psychology with a minor in Spanish and has an eye toward a graduate degree in clinical psychology. Sklarin will finish up her senior year majoring in creative writing with minors in Spanish and environmental studies. Clayton, co-captain of the student-run club team, is a double major in French and government. She is working on a senior thesis that looks at attitudes toward immigration among French citizens, and will be conducting surveys in French. Clayton’s thesis advisers are the noted government professors Bendan Nyhan, Yusaku Horiuchi, and Jeremy Ferwerda.

Keeping up with the demands of training for biking, swimming, and running while maintaining a full academic and extra-curricular schedule is not easy.

“I just can’t ever waste any time,” says Clayton. “I’m either working on triathlon or I’m working on school work, or I’m working on one of my other commitments. But as long as I plan ahead, and make sure that I am prioritizing things like getting enough sleep, getting regular meals and things like that which you really need to support the triathlon lifestyle, then I find that I am able to do it. It is a balancing act, though.”

Clayton ran cross country in high school and may have been able to run on a varsity team at a different college, but opted against it. “I was thinking, would I rather go to a Division III school where I could run on the cross-country team, or would I rather go to Dartmouth and still find something to fill that box? I picked Dartmouth because it was academics first,” says Clayton, who is considering a PhD program in political science. “Dartmouth is an amazing school and I’m so glad that I did.”

Jeff Reed ’76 of Norwich, Vt., a lifelong runner who got involved in Triathlon later in life, volunteered as coach and trainer shortly after the team was established in 2013. He says it is the student athletes who keep the team going.

“They’re incredible kids. They run the show, they’re so organized, they’re so much fun to be around, it’s such a joy to be part of it, especially as an alum,” Reed says. “They’re all motivated and smart and working on cool stuff. It’s really impressive.”

Regardless of where their careers take them, all three women say triathlons will remain an important part of their lives.

“After graduation, I would love to work in marketing or advertising or to continue my work in creative writing,” says Sklarin. “But training for triathlons has been a source of passion and drive in my life for the past few years, and I hope to grow old racing.”