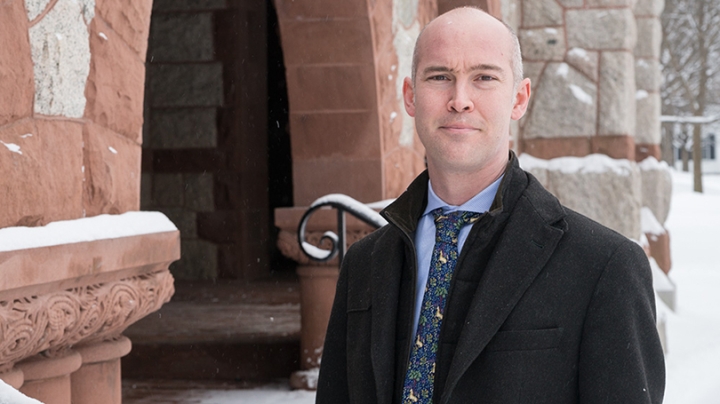 “There’s an enormous wealth of material there from all different centuries,” says Assistant Professor Nicola Camerlenghi about the digital archive he and colleagues created. (Photo by Eli Burakian ’00)
10/17/2017
Body

In the late 19th and early 20th century, the Roman archaeologist Rodolfo Lanciani collected an enormous archive of Rome’s history—meticulously documenting the excavations of the city’s 3,000 years of continuous settlement.

Today, Lanciani’s archive is housed in a 15th-century palace (formerly also Mussolini’s headquarters), which is accessible only to scholars who make the journey to Rome to see it.

Now Assistant Professor of Art History Nicola Camerlenghi and his colleagues at the University of Oregon and Stanford University have scanned nearly 4,000 prints, paintings, and drawings from the collection—building a website to make them available to researchers and the public. The site, hosted at Stanford, was made possible by a grant from the Samuel H. Kress Foundation and generous support from Dartmouth’s William H. Neukom Institute for Computational Science. The Istituto Nazionale di Archeologia e Storia dell’Arte, which owns the collection, made the material available for this international collaboration of scholars.

“There’s an enormous wealth of material there from all different centuries,” says Camerlenghi of the online archive. “Any lover of Rome, professional or amateur, gets a kick out of looking at this stuff, image after image. It’s intoxicating—you just want to see more.”

The digital Lanciani archive project is just one part of a larger scholarly collaboration called “Mapping Rome,” for which Camerlenghi is a principal investigator, along with scholars from Oregon, Stanford, and Italy.

A photograph, circa 1900, from the top of the dome of St. Peter’s Basilica in Rome, looking down from about 440 feet. The image is part of the Lanciani collection, now available digitally thanks to the work of Professor Nicola Camerlenghi and colleagues. (Copyright © Istituto Nazionale di Archeologia e Storia dell’Arte)

Dartmouth undergraduates and recent graduates have played an integral role in the project—thanks to a CompX grant from the Neukom Institute—learning the discipline of humanities research in the process.

For example, Gina Campanelli ’18 and Isabella Marchal ’18—both art history majors and premed students—catalogued collectors’ marks on prints scanned from the Lanciani archive. The marks show a history of the origins of each work Lanciani gathered.

“Each symbol relates to a certain collection that the drawing was a part of at some point. You had to learn how to identify the marks, and often they’ll be cut off, so you had to identify it from a small sliver,” says Campanelli. “You had to really scan every quadrant of the image to see if there was a mark. Sometimes it was a little tedious going through hundreds and hundreds of images, looking for watermarks, but you do get pretty good at it.”

Camerlenghi also hired two recent graduates, Lucas Dube ’16 and Graylin Harrison ’14, as research assistants on the Lanciani project. Together they created a spreadsheet of metadata cataloging all known information about every image being scanned for the website.

“One of the most interesting things is reevaluating Rome through a different generation’s eyes,” Dube says. “When you come to Rome you see all of these different monuments, and they’re beautiful in their own right, but then you see how the city was so different, and you see how people themselves had different priorities in life—they saw something else when they saw the Coliseum” from what a modern viewer might experience.

“There are some great images of the Forum, which nowadays is entirely excavated—we see it as this big tourist attraction,” Dube says. “It’s just very helpful to see a print from the 17th or 18th century where there are just a couple of columns standing up, and it was called the Campo Vaccino, the cow field. That’s something that you don’t think about unless you see with your own eyes what someone else has drawn and recorded for you.”

Camerlenghi says involving undergraduates in research benefits him as much as the students. “You always get a fresh approach and new ideas, because they’re going to solve problems in ways that I wouldn’t have thought of, in part because of their technical know-how, in part because of their ignorance—they don’t know, so they have to be resourceful. And Dartmouth students are resourceful. That combination makes for new directions I wouldn’t have thought of.”

For Camerlenghi, the project has also illuminated how art historians and archaeologists worked in the days before email and the internet. For example, the archive contains a copy of a letter from an architect sent to collectors in 1915 with a sketch from memory of a drawing he wanted to locate.

“It gives us an insight into how scholarship was done at the turn of the century. You wouldn’t just be able to put the image into Google Images,” Camerlenghi says. The find inspired Camerlenghi to write a short essay that is included in the curated essays section of the digital archive.

The students say the experience has given them a sense of what goes into collaborative research in the humanities. “What’s been wonderful about the Rome project is that there is this sense of an academic community that I have exposure to,” Marchal says.

Campanelli agrees. “It’s humbling to feel like in some small way I have contributed to this incredible project.”