Bats and Bugs Do Battle in the Tropics 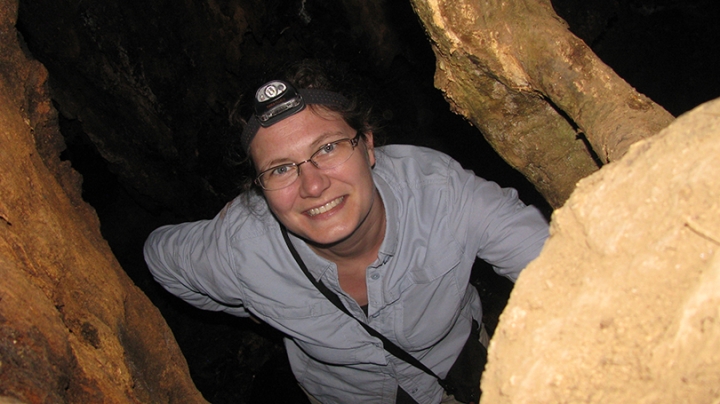 In the tropical rain forests of Panama, Dartmouth’s Hannah ter Hofstede is witness to what Charles Darwin called a “struggle for existence.” She studies a competition for survival that pits the cricket-like katydids rubbing their wings together to make their ultrasonic mating songs, and bats hearing that mating call as a dinner bell.

Ter Hofstede, an assistant professor of biological sciences, is exploring the acoustic world of bats and their insect prey. Assisting her are biologist Sharon Martinson and Neukom Fellow Laurel Symes, who climb high into the forest canopy to plant audio recorders to capture the katydid calls.

Hundreds of katydid species live on Panama’s Barro Colorado Island, where the Dartmouth researchers conducted their studies. Some of their findings appear in the journal Behavioral Ecology and Sociobiology.

Panama’s katydids come in all sizes, showing the extremes of species diversity. (Courtesy of Sharon Martinson)

Ter Hofstede first visited the island a decade ago while working on her PhD. “I was just so amazed by the diversity. I was overwhelmed,” she says. She also learned that the island insect population’s life is not altogether idyllic.

“In Central America there is a group of bats from one particular family that specializes in gleaning,” says ter Hofstede. “Instead of flying around and catching insects in the air, they listen for sounds made by insects and fly down, grabbing them off vegetation.”

The katydids must make their music to attract females, but this reveals their presence to predators. Bats similarly alert their prey, which are also listening for ultrasonic cues—the echolocation sounds of bats on the hunt.

The scientists are searching for correlations between how obvious the katydids are to the bats and what kind of survival strategies the insects employ. Some listen for the echolocation sounds and then go quiet when they hear bats going by.

“Some katydids stay quiet, but then they increase their vibrational communication, shaking branches and things like that,” she says. “The bats, listening for the sounds the katydids typically make, don’t seem to pick up on the branch shaking. Then there are katydids that produce a lot of sound but they always do it from thorny bushes or other places where the bats can’t get at them.”

Darwin would have viewed all this as a tradeoff between selecting for more sound to entice mates and selecting for less sound to avoid predators. “The combination of these conflicting selection pressures and the wide range of diversity in the katydid species suggests that there may be multiple solutions to this challenge,” ter Hofstede says.

Ter Hofstede is now immersed in sifting through the enormous amount of data her team has collected over the past two years, looking for patterns of behavior across katydid species. “My conclusion at this point is that every katydid species seems to be doing something different,” she says.

Ter Hofstede says that her research examines the selection pressures animals contend with as they evolve and sheds light on the bigger picture of evolutionary biology.

“I don’t think it is limited to katydids and bats where you get these kinds of conflicting pressures. Basically, every organism that exists needs to find food, mates, and avoid being eaten themselves. I think documenting the diversity of ways that animals do that is teaching us about the process of evolution for all animals.”