The alumnus will lecture and make prints in the library that houses his grandfather’s murals. 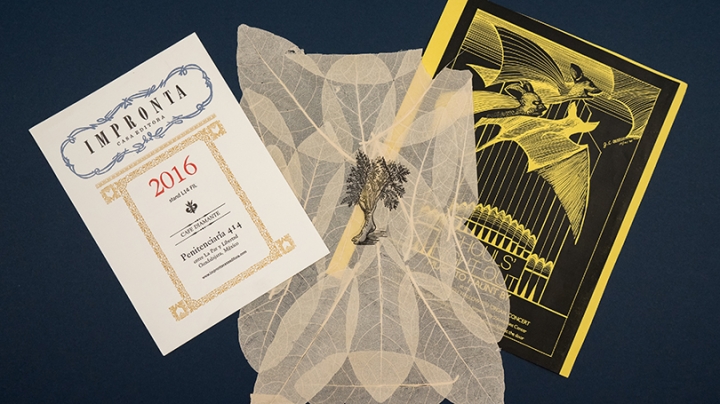 Clemente Orozco at work in his studio in Guadalajara, Mexico (Photo courtesy of Jill Baron, librarian at the Dartmouth Library)

Clemente Orozco ’85 is returning to Dartmouth this week to share his talents and reflect on his long career as an illustrator, printer, and book designer.

The alumnus is the grandson of José Clemente Orozco, whose mural cycle, The Epic of American Civilization, is at the Dartmouth Library.

“I never met my grandfather, because he died 15 years before I was born,” says Orozco. “But he was a huge influence on my family, and we are working to preserve and catalogue his work here in Mexico.”

The younger Orozco has built his own reputation as an artist, and as the director of Impronta Casa Editora, an independent book publisher and cultural venue in Guadalajara. He says his interest in graphic design and typography was sparked at Dartmouth, where he made silkscreen posters for the Hopkins Center design shop.

“The book workshop in the basement of Baker Library did not exist back then, and I am excited about coming back and getting to work on the presses,” says Orozco, who studied studio art and art history at Dartmouth.

Students in Daniel Heyman’s studio art class will be working alongside him this week.

“As a letterpress artist coming from a rich print culture, Clemente will bring his real-world experience to bear on students’ budding studio practices,” says Heyman, who is also a member of the Class of 1985. “Together the students will create a book as a group project—each student will design a one-page spread.”

The theme of the book project, suggested by Orozco, is “Books, Disasters, and Catastrophes.”

Dartmouth Book Arts Workshop Program Manager Sarah Smith has been showing Heyman’s students how to set type. She says Orozco is part of a worldwide revival in handmade books. “We’ll get his take on book publishing, design, and illustration in Mexico, and students will learn how book designers collaborate with authors,” says Smith.

In addition to working with Heyman’s students, Orozco will visit an art history class, “Latinx Art and Activism,” taught by Tatiana Reinoza, whose scholarship focuses on the history of printmaking in Latinx communities. On Friday, he’ll give a lunchtime seminar, “From Posada to Artemio Rodrîguez: The Popular Print Culture in Mexico,” for faculty in the Program in Latin American, Latino, & Caribbean Studies (LALACS), and meet with members from Two Rivers Printmaking, based in White River Junction, Vt.

Orozco will offer a public lecture at 4 p.m. Wednesday, Oct. 18, in Baker-Berry Library’s periodicals room, followed by a reception in the Main Hall. On Friday, Oct. 20, from 2-5 p.m., the book arts workshop in Baker-Berry will be open to the public, who will be able to watch the artist at work.

Orozco’s visit to Dartmouth this week grew from a chance encounter he had with Jill Baron, Dartmouth’s librarian for Romance languages and Latin American studies, at a book fair last year in Guadalajara. As she recounts in a blog she wrote about her trip, “I was inside a stall occupied by three Mexican independent book publishers, with my head down in a book, when suddenly I heard someone ask, “Dartmouth?”

Baron looked up, a little startled, and nodded. “Clemente Orozco introduced himself, smiled, and said, with a handshake, ‘I’m Class of ’85.’

“Clemente welcomed me and two other librarians at the Impronta studios, where we toured the workshop with its dozens of letterpress and linotype presses.”

In a related event, Orozco’s grandfather’s work will be the topic of the annual Manton Foundation Orozco Lecture, sponsored by the Hood Museum, on Friday, Oct. 27, from 5:30-6:30 p.m. in the Herb West Lecture Hall, Carpenter 013.