At U.N. conference, the professor urges that scientists be advisers in international effort. 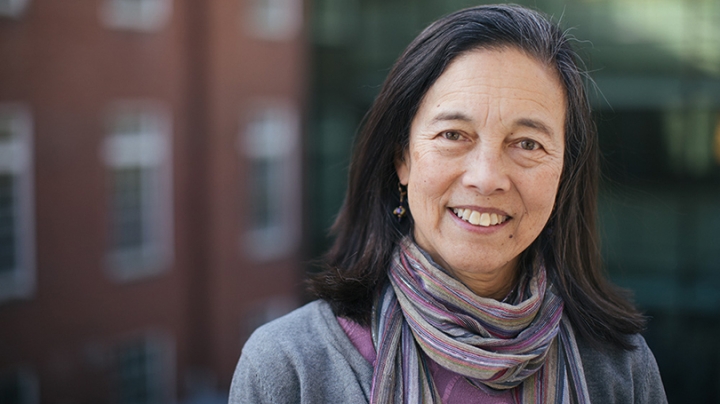 At last month’s U.N. conference in Geneva, Switzerland, Dartmouth researcher Celia Chen advocated for the inclusion of scientists in the implementation of an international treaty to reduce toxic mercury in the environment.

Chen, a research professor in the Department of Biological Sciences and a principal investigator in the Dartmouth Toxic Metals Superfund Research Program, joined delegates of the Minamata Convention’s ratifying and signatory countries in Geneva for the first Conference of the Parties (COP-1). There, she represented Dartmouth as a nongovernmental organization.

Chen and colleagues from Massachusetts Institute of Technology distributed papers that summarized the latest mercury science and its ramifications, relating this information to environmental management issues and policy implementation.

The Minamata Convention on Mercury is named for a coastal city in Japan that was the site of the most severe mercury-poisoning episode in history, which first came to light in 1956. Mercury was in the wastewater from a chemical plant—a toxic discharge dumped into Minamata Bay on a massive scale, causing thousands to become ill. As of 2001, the Japanese government had recognized 2,265 victims, 1,784 of whom had died. More than 10,000 victims had received financial compensation from the plant’s operators.

Signed by 128 countries, including the U.S., and ratified by 83 of these to date, the treaty targets the toxic global pollutant, which is known to attack the human central nervous system, sometimes with fatal consequences. It addresses specific human activities that have historically contributed to widespread mercury pollution, such as the operation of coal-fired power plants, waste incineration, and certain metal production operations, including artisanal small-scale gold mining. Another goal of the treaty is to phase out or reduce mercury use in products such as batteries, switches, lights, thermometers, and in dental amalgams.

“From the science perspective,” Chen says, “the ability to effectively implement the Minamata Convention will depend on comparable and consistent global measurements on land, and in air, water, and biota.”

She acknowledges that establishing the baseline will require a major effort but said it would be necessary to determine whether the treaty is working. “The baseline is not just what is in the environment, but also how much countries are now emitting. Implementation is a political process, but scientists need to be involved in providing the baseline data and in monitoring the subsequent changes.”

Human exposure to mercury in the United States is primarily the result of eating large ocean fish like swordfish and tuna. “Mercury in these and other marine fish often exceeds levels that are harmful to children and the developing fetus. In the U.S., the largest source of the mercury that contaminates our seafood is the burning of fossil fuels, mainly coal,” says Chen.

She notes that all the mercury discharged into the atmosphere eventually ends up in the oceans, lakes, and rivers. “Asia as a region is currently the largest contributor, but most of the mercury now cycling in the atmosphere, oceans, and on land is from the developed countries, since we began burning our coal 100 years ago.”

Chen says the U.N. conference was an important step forward in moving countries to address the challenge of reducing mercury in the environment.

“What lies ahead is the important task of ensuring that current mercury science is taken into account in the implementation of the Minamata Convention, particularly in evaluating its effectiveness,” she says. “Countries must utilize mercury science and monitoring to determine the amount of mercury pollution that now exists in order to realize the improvements that will result once the convention is implemented.”

The science communication provided at COP1 was supported by a workshop grant from the National Institute of Environmental Health Sciences, the Research Translation Core of the Dartmouth Toxic Metals Superfund Research Program, the MIT International Policy Lab, and the 13th International Conference on Mercury as a Global Pollutant.