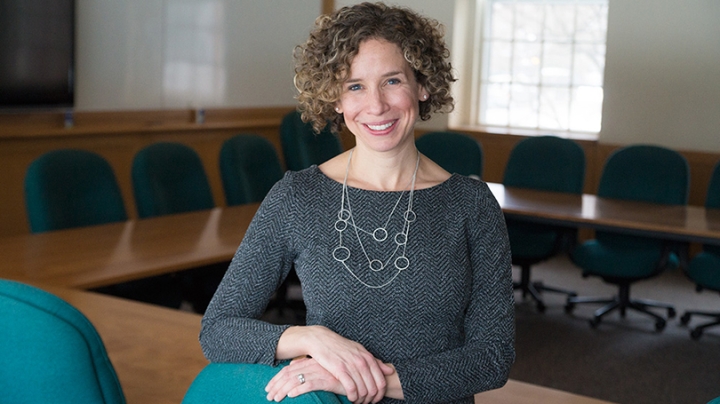 Associate Professor of Economics Elizabeth Cascio, whose research focuses on the economics of education, was invited to present her work at a recent national policy forum on women’s economic opportunity. (Photo by Eli Burakian ’00)
10/24/2017
Body

Cascio was invited to present her work at the conference, which brought together leading voices in academia, business, and politics, including top Facebook executive and LeanIn.org founder Sheryl Sandberg, Debra Ness, president of the National Partnership for Women & Families, and U.S. Rep. Anna Eshoo, a California Democrat who has represented Silicon Valley for more than 20 years. The forum was sponsored by the Hamilton Project, LeanIn.org., and Stanford Law School, which hosted the conference.

“As a researcher, I’ve devoted significant time to generating some of the ‘evidence’ behind evidenced-based policymaking on the care and education of young children,” says Cascio. “I’ve found it gratifying to see that evidence occasionally cited by policymakers. But it’s rare to have the opportunity to translate the evidence into a concrete policy proposal, rarer still to be able to participate in a forum like this that increases its visibility.”

The goal of the Hamilton Project, an economic policy initiative of the Brookings Institution, is to provide a platform for leading economic thinkers to inject innovative policy options into the national debate.

“The forum offers a rare opportunity for scholars to translate their academic research into action that can benefit women and the economy more generally,” says Christopher Snyder, the Joel Z. and Susan Hyatt Professor of Economics and chair of the economics department.

Cascio’s invitation to present her paper and join the roundtable discussion demonstrates the prominence of her research, Snyder says.

“Professor Cascio is among the best-cited female economists in the world over the last decade,” he says. “Given the leadership women have taken in the study of traditional issues—money, taxes, trade—as well as a rich set of new questions—gender, schooling, poverty, work—to call someone a great female economist is to call her a great economist. We are lucky to have a great economist like Liz Cascio at Dartmouth.”

Reports and public presentations from the Hamilton Project are often cited by lawmakers and issue advocates in public policy debates. Brookings will collect the discussions and papers from the women’s economic forum into a book titled The 51%: Driving Growth through Women’s Economic Participation, with the goal of driving public debate on the effects of economic policy on women and families.

Cascio says she will bring the research she presented at the forum into her public economics research class next term. The process of writing and presenting an evidence-based economic policy paper on short notice offers many teaching points, she says.

This year, Cascio took over as director of the Dartmouth Economic Research Scholars program, which aims to increase opportunities for economics undergraduates to participate in high-level faculty research.

“As head of the research scholars, Liz immediately launched a handful of initiatives and has energized the program,” Snyder says. “She is a dedicated teacher and mentor in addition to scholar.”