The musical recalls the waning days of the Weimar Republic and the rise of Nazism. 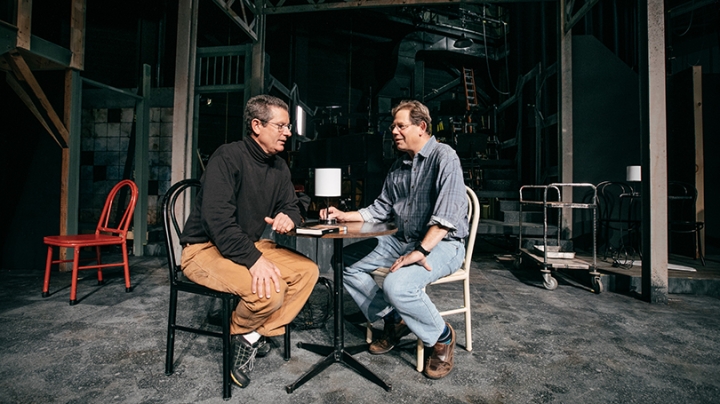 “Willkommen, bienvenue, welcome to the cabaret,” croons the emcee in the musical recalling the waning, decadent days of Germany’s Weimar Republic. You can be Cabaret-bound on Friday, Nov. 3, when the curtain rises on the theater department’s fall main stage production.

Michael Ganio, an assistant professor of theater, designed the set, and Dan Kotlowitz, the Leon E. Williams Professor of Theater, designed the lighting. They recently spoke with Dartmouth News about their collaboration on Cabaret. On the floor of his office near the scene shop, Ganio laid out photographs and books from which he and Kotlowitz have drawn inspiration, along with his own binder of colored illustrations of each set piece, called “painting elevations.”

What is the very first step in designing the set and lighting for a production?

Ganio: We start with the script, libretto, and music. That provides the road map, but it doesn’t fully describe what our journey will be. When we were having our initial conversations with director Carol Dunne, we talked about what was going on historically, and both Dan and I got very excited about the writing of William Shirer, a journalist who ended up working for Edward R. Murrow. Shirer was posted in Germany in the 1930s, and he kept a diary. It’s beautifully written—he describes, one day at a time, the slide toward Nazi control. He creates a creeping fear as you move forward through the book.

How does that diary shape your design of the set?

Ganio: We’re trying to link that notion of creeping fear to the fact that we know what happened. I started with basic questions: Where is this cabaret, what building is it in, what neighborhood is it in, and what was the building before it became this decadent cabaret? I took to Carol all of these thoughts, along with this book called Asylum, a collection of photographs of turn-of-the century spaces that have been abandoned. There is a true sense of ghost spaces. So, the back story to the scenery you see is that it’s a bit of a railroad siding, a warehouse, a luggage station, a semi-abandoned factory. It’s all of those.

A model of the set for Cabaret in the scene shop guides the construction crew. (Photo by Robert Gill)

What about more pragmatic technical considerations, like sight lines?

Ganio: Yes, can everyone in every seat see the stage? Where are entrances and exits?  How can we use the stage in a way that’s unusual? Some scenes take place in a rooming house and others in the cabaret. How do we indicate to the audience that we have made that shift? There’s no moving scenery in this production. It’s on my colleague, Dan, to transform the space with lights, both emotionally and physically.

Kotlowitz: One of the things we hope to do is help the audience discover what is really happening, in the same way that the Germans must have slowly realized what was happening in their society. There’s a moment in the show where you see a swastika on an armband, and that’s the only time that you see that. It’s just an armband, but the impact of it at the point should be huge.

When something like a swastika appears on a costume armband, do you have to strike a balance, in lighting, between calling an audience’s attention to it and not hitting us over the head with that symbol?

Kotlowitz: That’s certainly part of it. We call it pulling focus, but for me that’s the last step. For me, the core lighting design question is who these people are in this space, and what these musical numbers look like. The lighting in those days was very crude, and the crudity is what gives it such charm. There’s a kind of crudity in what I am trying to do, but that’s balanced by what we call book scenes, where, all of a sudden you’re in someone’s room. It becomes important what time of day it is, and what’s happening. Are they drunk? What’s the feeling in the room? Another part of what lighting does is to touch the audience every now and then.

Can you give an example?

Kotlowitz: Some of the set is covered by tiles, like the bakery in one of the photographs Michael found. Bakeries remind us of ovens—and we know what ovens meant in that time period. Lights need to help the audience see those tiles for what they really are, for just a second.

How does your design work affect the students on stage? Do the actors become better, more convincing in their roles when they move from rehearsal spaces to the set?

Kotlowitz: In academic theater, more than in professional theater, yes. The mixture of being on the set, in costume, under lights, really transforms student actors. They grow with the scenery, with the costumes, with the lights, and then when they have an audience they grow even more.

And behind the scenes, what do students learn from building sets and hanging lights?

Ganio: A builder works on just one tiny piece of a set in the shop at any given moment. So I do think there is kind of a thrill when students see all these individual pieces come together. They watch parts of what they have built taken out on stage and assembled into this gigantic version of the little model they have been looking at. When they climb off the stage and step into the auditorium and look back at what they have done, it’s quite a moment.

Cabaret opens in Moore Theater at the Hopkins Center for the Arts at 8 p.m. on Friday, Nov. 3, and runs through Sunday, Nov. 12. Lecturer Keith Coughlin is choreographer; Kevin Smith is music director, Associate Professor of Theater Laurie Churba is costume designer; Kyle Toth is sound designer; and Maya Frost-Belansky ’20 is stage manager. Virginia Ogden ’18 plays the role of Emcee. There will be an opening night reception following the show at the Top of the Hop, a pre-show talk at 7 p.m. Saturday, Nov. 4, and a post-performance discussion on Friday, Nov. 10, with the director, music director, and members of the cast.