A New Director and a New Direction for Barbary Coast 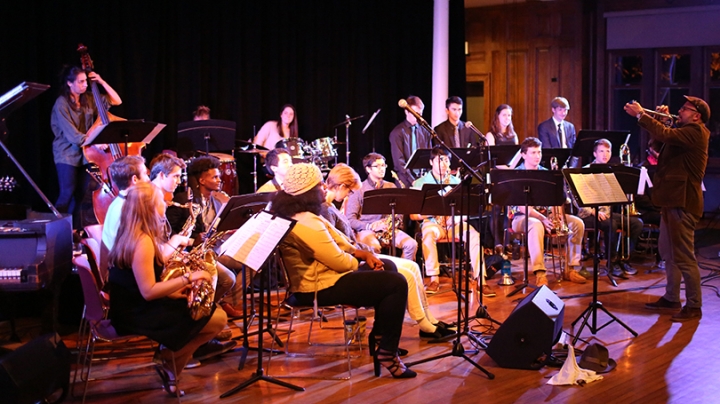 “I am often associated with the avant garde, but I have a real soft spot in my heart for big melodies,” says cornetist Taylor Ho Bynum about his jazz compositions and performance. Bynum says he’ll balance conventional and unconventional repertoire for his first concert as the new director of the Barbary Coast Jazz Ensemble .

Voted a 2017 “rising star” by DownBeat magazine, Bynum—as band leader, composer, and performer—has made over 20 recordings. “Musically, Taylor is at the top of his game,” says Hopkins Center Director Mary Lou Aleskie. “And what makes him great for our students and the Coast is that he knows how to bring people together and help them find the best within themselves.”

At a recent rehearsal for the Nov. 3 concert, Bynum coached the horn section. “This may seem like a super simple part,” he told the players, “but simplicity takes real focus, both in terms of rhythm and intonation. Breathe together as a section—feel the beat together.”

That sense of creative community, of musicians becoming more than the sum of their parts during improvisation, is what Taylor says he hopes to instill in the performers, most of whom are not music majors.

“That’s one of many things I love about Barbary Coast,” Bynum says. “The students who show up aren’t doing it for credits—there aren’t any—but because they really want to be here, to make sounds together.”

Sound, says Bynum, should sometimes surprise as well as delight an audience. He can make his cornet growl, hiss, whisper, and wail, his fingers racing through octaves with mind-boggling speed. But he also likes to play slow, lyrical ballads. On a shelf in his spartan office across from Hartman Rehearsal Hall, books and CDs run the gamut from pianist/band leader/composer Duke Ellington to jazz experimentalist Sun Ra.

Bynum’s own musical upbringing in the Boston area was, he says, eclectic. “My parents were into the arts, and took me to hear Mozart and Haydn and Handel.” He also listened, more informally, to talented guests—including opera singers—staying at his mother’s bed and breakfast. At Brookline High School, he picked up the trumpet, turning later to cornet. His musical mentors include bass trombonist Bill Lowe (who will be a guest artist at Dartmouth this winter), the late jazz trumpetist Bill Dixon, and Anthony Braxton, a leading avant garde composer who plays saxophone, clarinet, and piano.

“There is narrative, there is melody, but they don’t necessarily go where you expect them to go. Say you have a dream: One minute you are a third-grader taking a test, and the next minute you are swimming in the ocean with your cat. In your dream, it made sense how to get from one place or the other. For me that journey—that’s the interest.”

Sound, says Bynum, should sometimes surprise as well as delight an audience. (Photo by Peter Gannushkin)

Bynum’s unorthodox approach to music creation and presentation is getting kudos from Barbary Coast members.

Sophia Kinne ’20, who plays trumpet, says he “opens up a whole new world of musical possibilities, because he doesn’t just stick to melodies; he’s more about sound and what you can do with sound.”

Charlotte Kamin ’18, a drummer, says at first she tried to “lock in with everyone else, but he keeps telling us to find our own voices, and this term I am really trying to do that.”

Noah Campbell ’21, a saxophonist, says Bynum creates “a good dynamic, telling us to think beyond what’s on the page.”

Bynum’s invitation to improvise freely has, for his assistant, pianist Emma Howeiler ’18, “completely re-shaped my musical path, and my relationship with art.”