A Philosopher Worries About the ‘Foundations of Things’ 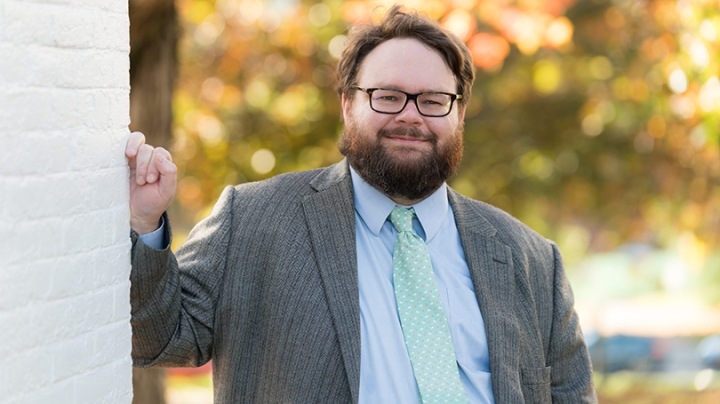 “A lot of people say philosophy begins in wonder, but worry and puzzlement are the dark underbelly of wonder,” says Associate Professor Kenny Walden. (Photo by Eli Burakian ’00)
10/30/2017
Body

If you click the link for “CV” on Kenny Walden’s faculty webpage, you’ll find an aerial photograph of an RV dealership. Its location, a note indicates, splits the distance between Dartmouth, where Walden is an associate professor of philosophy, and Harvard and MIT, where he did his undergraduate and graduate studies, respectively. “I think it an apt representation of my intellectual development,” he writes.

Asked about this, Walden seems slightly embarrassed, until the conversation turns to one of his favorite figures from ancient philosophy, the Cynic Diogenes. “I have a sort of all-out-of-proportion admiration for him, which might explain why I put an RV dealership on my webpage,” he says.

“Diogenes believed that we should live according to nature, and he thought artificiality was opposed to living in accord with nature. So he lived his life in a way that was exemplary at flouting norms. He lived in a wine tub, he would urinate in places where you’re not supposed to urinate, and he’d interrupt deep philosophical discussions if he thought that they’d gotten too arcane. I think Diogenes is an ethical genius.”

Ethical genius is something to which Walden has been giving a lot of thought. He is recently back from a research leave supported by a grant from the Beacon Project—a Wake Forest University-based center funded by the Templeton Foundation—during which he has been puzzling out the question of why some people seem to be geniuses at living, the way others might be geniuses at art. Think, maybe, of Gandhi or Thoreau.

He says that “our moral thinking can be enriched by engagement with the lives of ethical geniuses, and the kind of engagement that’s most stimulating is going to be aesthetic engagement. In a lot of cases, we might find their lives very strange, or have difficulty subsuming them to our usual standards of value because they’re so exceptional, but we can nonetheless appreciate them as being beautiful in a certain way, and I think that holds the promise of a kind of liberalization of our thinking that might not be available otherwise.”

Walden has long been fascinated by the connections between aesthetics and moral thought. His paper “Art and Moral Revolution,” published in The Journal of Aesthetics and Art Criticism, recently won the inaugural Arthur Danto/American Society for Aesthetics Prize from the American Philosophical Association. In it he makes the case that some works of art not only have the potential to expand our moral thinking, as other philosophers have argued, but also “have this more radical ability to reconfigure our thinking.”

He’s still pondering these questions—worrying about them, he says. “A lot of people say philosophy begins in wonder, but worry and puzzlement are the dark underbelly of wonder. So you kind of walk around and think about a question. If you’re lucky, an idea occurs to you, sometimes out of the blue, sometimes because you’re reading something. And you start to sketch something out. It starts very rough and you gradually start to fill it in.”

As a teacher, he appreciates Dartmouth’s small, discussion-centered classes. Philosophy has a lot to offer undergraduates, even if they aren’t majors, he says. In his classes, students learn to make arguments, find counterexamples, anticipate objections, and, above all, “how to make their thinking clear”—skills applicable to any field.

He himself started as a math major as an undergraduate, but started “worrying more about the foundations of mathematical thought and how that fits into our broader understanding of the world. I’ve always been interested in trying to understand the foundations of things.”

The College, he says, is a good place to be a philosopher. “Dartmouth’s great. The philosophy department is a terrific group of teachers and scholars. I get a lot of support from my colleagues, and the students are really receptive and enthusiastic. I feel privileged to be at an institution that has the resources to support the kind of academic mission that Dartmouth has.”