Provost Dever Stepping Down to Return to Academic Life

“I am grateful to Carolyn for her unyielding commitment to Dartmouth,” says President Hanlon. 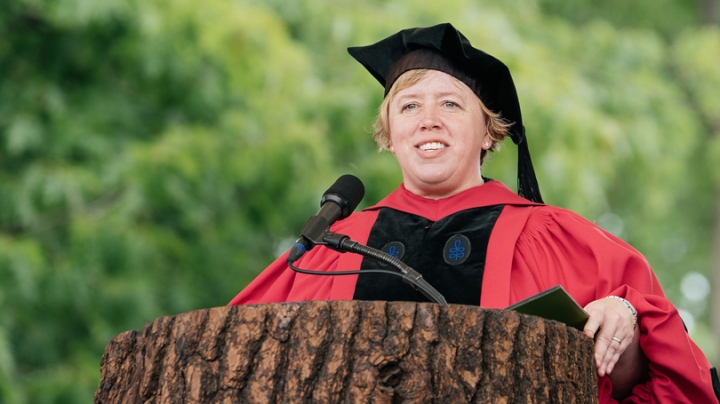 In her fourth year as Dartmouth’s chief academic officer, Provost Carolyn Dever has announced that she will return to teaching and research.

Dever, whose major accomplishments include leading an effort to improve campus diversity and inclusivity—particularly on behalf of faculty; championing academic initiatives; and recruiting deans and other top leaders, says she has chosen not to pursue a second term as provost and will return to the intellectual vitality of the classroom and scholarly life.

As provost, Dever is Dartmouth’s chief academic and budget officer. Charged with elevating the academic profile of the institution, she works, in consultation with the academic deans, to advance the teaching and scholarship of the Faculty of Arts and Sciences, the Geisel School of Medicine, the School of Graduate and Advanced Studies, Thayer School of Engineering, and the Tuck School of Business.

As the College’s second-ranking officer, Dever says she has enjoyed helping to shape Dartmouth. Even while serving as provost, she has taught in the first-year humanities sequence and in the Program in Women’s, Gender, and Sexuality Studies. At a moment when new digital resources are poised to revolutionize her area of scholarly expertise, she is eager to embrace new opportunities in research and teaching.

“I chose a life in the academy to explore new ideas, ask difficult questions, and advance learning,” says Dever, a tenured professor of English and scholar of 19th-century British literature. She will teach the first-year seminar “Reading Jane Austen” during winter term, and will then take a research leave to complete a book, which has been in progress throughout her service as provost, on art and intimacy in Victorian Britain.

“I am grateful to Carolyn for her unyielding commitment to Dartmouth and the progress she’s made on a wide range of programs that are critical to Dartmouth’s success,” President Hanlon says. “She has set down a firm foundation on which her successor can build.”

Dever has played a lead role in the development of priorities and specific initiatives for the next fundraising campaign and has led Dartmouth’s drive to increase diversity among the faculty.

“I take pride in focusing Dartmouth on the hard work of advancing diversity and inclusion on campus. This is a lifelong commitment for me and I will continue this vital work at Dartmouth and beyond,” she says.

Working with the dean of the College and academic deans, the provost is responsible for supporting and advancing all student-related programs and has significant budget oversight, working closely with the executive vice president to manage the academic budget. Dever has chaired the institution’s budget committee and served as a member of the budget executive committee.

Dever says she is proud to have appointed Rebecca Biron, a professor of Spanish and comparative literature, as the first faculty member in recent years to serve as dean of the College, creating greater alignment between curricular and co-curricular elements of the student experience.

Dever supported the launch of the undergraduate house community system, leading recruiting of the inaugural house professors in the year-old undergraduate house community system. She also advanced the launch of the nationally visible Society of Fellows program, which has now welcomed its third cohort of postdoctoral scholars to campus. She led the effort to secure support from the Andrew W. Mellon Foundation for programmatic innovations on behalf of the recruitment and professional development of talented underrepresented faculty, and assisted in restoring financial stability at Geisel.

During her tenure, Dever led creation of an improved sexual assault disciplinary policy and reorganized the dean of the College division as well as her own division. She formed the task force that developed the School of Graduate and Advanced Studies and steered creation of the Center for Service and the William Jewett Tucker Center, both of which are carrying on the work of the former Tucker Foundation. As provost, she also managed the Office of Technology Transfer and Dartmouth’s Entrepreneurial Network (DEN).

She created seed funding for innovative faculty research, played a key role in the nationally recognized 2014 Dartmouth Summit on Sexual Assault, and championed College-wide participation in the 2015 campus climate survey.

In addition to her work in the classroom, Dever has remained in touch with students as a pre-major academic adviser and through individual mentoring and engagement with many different student groups. She has served as a Dartmouth ambassador worldwide, including visiting Dartmouth’s Global Health Project in Tanzania in May 2016.

Dever’s husband, Paul Young, is an associate professor of film and media studies and chair of the department and will continue in those roles. Their son, Noah, is a second-grader at the Ray School in Hanover.