The initiative aims to increase diversity in the faculty of higher education. 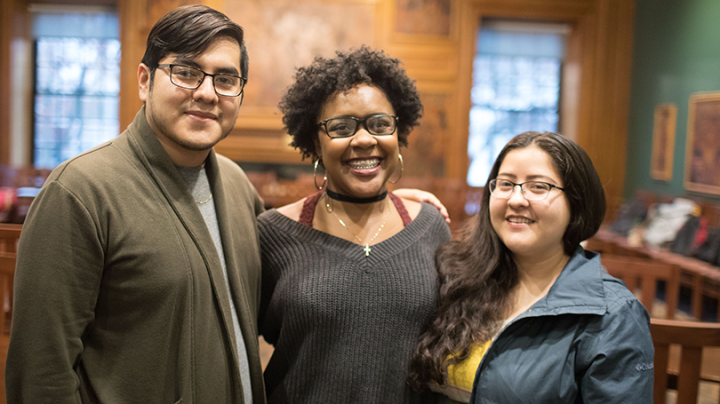 Mellon Mays fellows, from left, Oscar Cornejo ’17, Danielle Jones ’17, and Estéfani Marín ’17, who have been accepted into doctoral programs, attend a Mellon Mays gathering in the spring to talk about their experiences with other members of the program. (Photo by Robert Gill)
10/27/2017
Body

Seven recent graduates of Dartmouth’s Mellon Mays Undergraduate Fellows (MMUF) have begun PhD programs this fall. This is the largest cohort of fellows ever to begin doctoral study at the same time.

“This is a really exciting year for us. Collectively, these young scholars are advancing research in so many important fields—art history, English, sociology, political science, and interdisciplinary American studies,” says Professor Michelle Warren, faculty coordinator of MMUF and professor of comparative literature.

MMUF is the centerpiece of the  Andrew W. Mellon Foundation’s initiatives to increase diversity in the faculty ranks at institutions of higher learning. It currently includes nearly 50 member schools and consortia in the United States and South Africa. The program was established in 1988 with eight founding institutions; Dartmouth joined in 1989.

In 2005, Dartmouth increased the number of students who could participate in the MMUF mission by three additional associate fellows. Associate fellows are jointly supported by the offices of the dean of the faculty and the provost.

These seven doctoral candidates starting programs this fall join the nearly 20 Dartmouth alumni already on the path to PhD degrees and the more than 30 who have already earned their doctorates.

“It’s wonderful to see their varied paths toward a common goal—some have enrolled directly after graduating from Dartmouth, while others have worked for several years before continuing their studies. I’m sure that before too long we’ll be celebrating the largest number of PhDs conferred in one year,” says Warren.

Nana Adjeiwaa-Manu ’16 is a doctoral candidate in sociology at the University of Pennsylvania.

Focus of Study: Immigrant adaptation and integration, social psychology, economic security, and the sociology of youth

“I am interested in immigrant adaptation and integration, social psychology, economic security, and the sociology of youth. At Dartmouth, I started conducting research during Soyica Colbert’s first year writing seminar on the Harlem Renaissance. Research allowed me to begin answering the many of the questions I had about the way societies and people organize themselves. As a sophomore, I worked as Associate Theater Professor Laura Edmondson’s research assistant, and was accepted as an Associate Fellow into the Mellon Mays Undergraduate Fellowship (MMUF) program. MMUF showed me that it was possible to be a scholar-educator who could use her research to shape policies and serve her community. Completing my senior thesis, which was supported by MMUF, the sociology department, and the Nelson A. Rockefeller Center for Public Policy, reaffirmed my goal of pursuing a graduate degree that would enhance my skills as a writer, researcher, thinker, and educator. The support of professors who encouraged my academic growth, a loving group of lifelong friends, and Dartmouth’s generous resources have been instrumental in helping me achieve my academic goals.”

Feyaad Allie ’16 is a doctoral candidate in political science at Stanford University.

Focus of study: International relations and comparative politics with an intended focus on political violence, counter-terrorism, and Muslim-government relations

“I first became interested in research through working as a research assistant to several professors in the government department starting in my first year at Dartmouth. When I became a Mellon Mays associate fellow in my sophomore year, I began to learn about the paths to graduate school while building an intellectual community of classmates with similar aspirations. MMUF encouraged me to not only develop my own research questions and agendas but also to think critically about the importance of diversifying the academy. Writing a thesis during my senior year was an important process that solidified my aspiration to pursue a PhD. My senior thesis used a mixed-methods approach of survey experiments and interviews to examine the UK’s counter-radicalization strategy. Currently I am a first-year PhD student in political science at Stanford, where I’m looking forward to continuing to build on the academic goals I cultivated at Dartmouth.”

“I studied policing, incarceration, and asylum law through coursework and research in the Department of Latin American, Latino and Caribbean Studies. To broaden my understanding of these complex issues, I took courses in 12 different humanities and social science departments. In this way, Dartmouth’s full embrace of the liberal arts set me up for success in my interdisciplinary American studies PhD program at New York University. Additionally, I believe that the Mellon Mays Undergraduate Fellowship at Dartmouth was foundational in my trajectory from an under-resourced Texas public high school to one of the strongest departments in my field of study. MMUF offered practical skills and resources, including ample funding for independent undergraduate research projects, intergenerational mentorship by Dartmouth alumni in faculty positions and graduate programs, and individualized application support from top-notch faculty. These resources both set me apart in the competitive PhD program application process and better prepared me for the triumphs and challenges I’ll encounter on my academic trajectory.”

Oscar Ruben Cornejo Casares ’17 is a doctoral candidate in sociology at Northwestern University.

“I am interested in the relationship of undocumented immigrants with legal, educational, and political institutions in the United States. The Mellon Mays Undergraduate Fellowship program facilitated my intellectual and scholarly pursuits by providing the necessary space and support for graduate school. Mellon Mays allowed me to emerge as a scholar-activist for my communities in order to transform the academy.

Danielle Jones ’17 is a doctoral candidate in English at the University of Chicago.

“I am interested in African American and Afro-Caribbean literature and imagining a definition of humanity for black people outside of white supremacy. My interest in scholarship and teaching started in my first-year Caribbean literature class taught by Associate Professor of English and Creative Writing Shalene Moodie. Later, a junior seminar on Atlantic slavery with Assistant Professor of English Alysia Garrison laid the groundwork for my senior thesis, ‘Writing from the Wake: Afro-futurity in Atlantic Literature.’ Garrison later became one of my advisers on that project, along with Associate Professor of English Michael Chaney. The Mellon Mays Fellowship program was also extremely helpful as I considered a future in academia, in supporting my research projects and by providing advice and resources when I started applying for PhD programs during my senior year.

Estéfani Marín ’17 is a doctoral candidate in sociology at the University of California Irvine.

“I focused my time at Dartmouth as a leader, scholar, and activist in order to bring visibility to the marginalized experiences of underrepresented students. I held multiple positions on the La Alianza Latina board and helped organize events to bridge community differences and create a sense of belonging. Furthermore, I am passionate about creating support networks for minoritized students to help reduce educational inequalities. As a first-generation college student, I mentored incoming students through Dartmouth’s First Year Enrichment Program to help give them the necessary skills to thrive. Moreover, inspired by my experiences at Dartmouth under the advising of Associate Professor of Sociology Janice McCabe, I completed a senior honors thesis that featured students’ experiences of Latinidad, marginality, and resistance. Through scholarly inquiry, I plan to continue to advocate for an inclusive pedagogy in the classroom and beyond.”

Jessica Womack ’14 is a doctoral candidate in art and archaeology at Princeton University.

Focus of study: Modern and contemporary art of Latin America, the Caribbean, and the United States

“I knew in my first year that I was interested in pursuing a career in the arts, but I wasn’t sure what form that could take. I was also beginning to become discouraged by the  Eurocentricity  I repeatedly encountered in my  classes. I struggled to find a point of entry that resonated with my personal and intellectual questions. So I spoke with my freshman adviser, who told me about the opportunities for independent research and writing that MMUF provided. My experiences with MMUF motivated me to pursue a PhD. Through the fellowship, I came to understand academia as form of activism. My goal for the scholarship I will produce at Princeton and beyond is to decentralize hegemonic narratives in art historical scholarship that have systematically devalued the cultural contributions, religions, and lives of black people and other people of color. In addition to teaching me how to conduct research and speak confidently about my work, MMUF helped me feel empowered to add to scholarly discourse.”