The program allows scholars from a wide range of disciplines to advance their research. 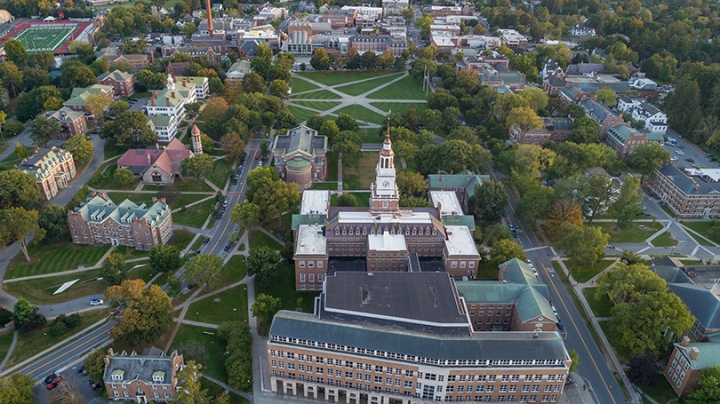 Launched by President Phil Hanlon ’77 in his 2013 inaugural address, the Society of Fellows welcomes seven members this year. The full cohort now numbers 16 postdoctoral scholars, integrating research and teaching in a collaborative community.

“I know I speak for my colleagues in welcoming this extraordinary new class of junior fellows to campus. They are talented, articulate, and engaging, and I’m confident this program will continue to enrich intellectual life here at Dartmouth,” says Society of Fellows Director Randall Balmer, the John Phillips Professor in Religion.

Max Fraser comes to Hanover from Yale University, where his doctoral research focused on American labor and working class history. His dissertation, “The Hillbilly Highway: A Social History of Transappalachia in the 20th Century,” traces connections between the rural South and the industrial Midwest. “I spent five years as a journalist,” Fraser says, “and on a reporting trip in the Midwest and upper South, in 2011, I learned how displaced Southern farmers had moved north in search of factory work. It seemed important to think about that in the broader political moment.” At Dartmouth, Fraser will investigate the rise of what he calls “outlaw culture and the emergence of an anti-political impulse within white working-class culture since the World War II.”

Sean Griffin is an early medieval historian finishing his first monograph: Byzantine Liturgy and the Making of the Rus Primary Chronicle. “My research shows that the myth of origins for Rus—modern-day Kiev—can be found in the liturgical services of the Byzantine Empire,” says Griffin. He holds a PhD from UCLA and has been a visiting professor at Stanford. Griffin lived in St. Petersburg for two years with a family of Orthodox priests. “Being immersed in the way clerical life is lived in contemporary Russia fostered my interest in Byzantine history,” he says. “I plan to tap into Dartmouth’s Digital Humanities Program, comparing digitalized liturgical manuscripts with historiographical texts spanning as many as 12 centuries.”

Jared Harris wants to make polymers smarter. “A polymer is any molecule that has a repeating structure, such as plastics, synthetic fibers, adhesives, a lot of paints—materials closely tied to the hydrocarbon industry,” he says. “Scientists are looking for ways to incorporate smarter functionalities into these materials.” For his PhD from the University of Massachusetts Amherst, Harris worked on polymers that can transport electric charges. “We can think about making electronic devices, such as solar cells printed on plastic,” says Harris. “You could print them like you print a newspaper, which would lower processing costs.” At Dartmouth, he’ll be working with Associate Professor of Chemistry Ivan Aprahamian to incorporate molecular switches into polymers.

Joshua Kaiser holds a JD-PhD from Northwestern University, but does not practice law. “I went to law school to research the criminal justice system and advocate for change,” he says. Kaiser studies “hidden sentences”—collateral punishments not explicitly ordered by courts. For example, he says, “You get out of jail, but you can’t find a job because you have to check a box asking about your criminal record. Or a landlord won’t rent you an apartment. Or you cannot vote.” At Dartmouth, he’ll research criminal justice in Vermont, where he says hidden sentences are relatively rare, and compare them to those in other states.

Laura McTighe comes to her scholarship through “20 years of grassroots organizing to end state violence and advance community healing.” For the last decade, she has been a partner at Women With a Vision in New Orleans, a black feminist collective founded in 1989. “WWAV fought back against criminalization after Hurricane Katrina and was firebombed for their work,” McTighe says—a crisis that propelled her dissertation research at Columbia University on “geographies of resistance.” Her first book project is an ethnography of HIV-positive Muslim women’s AIDS activism in Philadelphia and Cape Town, South Africa. At Dartmouth, she’ll work on a new project called “Moral Medicine,” which looks at how turn-of-the-century prison officials merged religion and eugenics inside women’s reformatories.

Alexander Smith entered the field of quantum information because he is “interested in the fundamental laws that govern how information is encoded and processed.” He says gravity has yet to be given a quantum description—“kind of the Holy Grail of physics”—and hopes that information theory may shed light on this problem. Smith earned his PhD from the University of Waterloo in Canada and Macquarie University in Sydney, Australia. He is currently exploring “how our everyday notion of time might emerge from a quantum theory of gravity.”

Derek Woods, who holds a PhD from Rice University, “looks at the way people use technology as a way of understanding ecosystems.” His dissertation addresses such topics as the influence of cybernetics on ecological science. He also examines how writers and other artists portray things that are too big or too small for humans to easily understand. “For example,” he says, “Powers of Ten, a 1977 film by designers Charles and Ray Eames, starts at the scale of human beings, zooms out to galaxies, and zooms back to a skin cell on one of their hands. As a humanities scholar, I am interested in such efforts to imagine our cosmology after the big interventions of science, which expanded our world in space and time.”