Dartmouth Scholar Is at the Center of the Fake News Debate 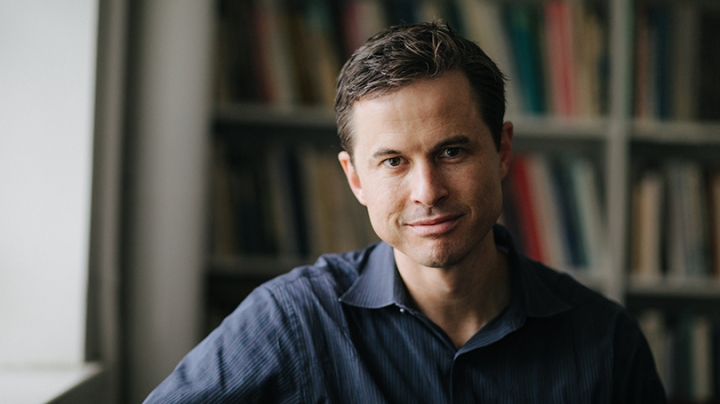 Today’s world of fake news, unhindered by references to facts, was only a worst-case scenario in 2001 when Professor Brendan Nyhan was still a marketing manager for the Silicon Valley technology nonprofit Benetech.

That’s when he and two friends started Spinsanity, one of the first political fact-checking sites on the internet. The political spin they were critiquing, about post-9/11 politics and the Bush administration’s messaging on the wars in Afghanistan and Iraq, was more about spinning perceptions than fabricating “facts.”

The kinds of stories that circulated on social media during the 2016 election cycle—such as reports of a Democratic Party controlled child sex ring operating out of a pizza parlor or a plot by President Barack Obama to disarm and imprison Americans—are not unprecedented in politics. What is new is the reach of these stories, compounded by reports of the role of Russian hackers in disseminating misinformation, says Nyhan, a professor of government specializing in misperceptions, conspiracy theories, and the media’s role in political communications.

“What I think is most novel about fake news in this election is the scale of its reach and the institutionalization of its production. People set up shops to produce fake news on an ongoing basis. They reap the tropes of mainstream news sites and they use social media distribution mechanisms—Facebook in particular—to reach many more people than they otherwise could have,” he says.

It became clear during the last election that there were profits to be made in the fake news market, giving rise to a new breed of information entrepreneur, “some of whom had no experience in politics or weren’t even in this country,” Nyhan says.

“You can think of the misinformation problem as having a demand side and a supply side. The demand side is the people who want to hear negative things about the other side in politics. The supply side is the politicians and media outlets and conspiracy entrepreneurs who provide that negative information that people want, even when it’s misleading or unsupported or false,” he says. “The market is unfortunately very efficient in this way.”

These questions are not just academic. The effect of fake news on the electorate and the scale of foreign powers’ influence on the daily media consumption of Americans are issues in an ongoing national debate.

The public debate is moving very quickly. As executives from Facebook tell a congressional committee that more than 100 million Americans were likely exposed to Russian-manufactured fake news, Twitter reveals that some 2,500 accounts were created by a Russian “troll farm,” Google says Kremlin-linked users uploaded more than 1,000 videos on YouTube, and the Senate considers legislation to tighten controls on social media. In the past, it was difficult for academics to bring political science research to bear on such fast-moving events because of the time needed to the gather and analyze the data.

Now the tools of quantitative social science, including online survey experiments, the ability to gather and organize the vast amounts of the digital data produced every day, and wide access to instant communication have enabled scholars to share research as trends develop, Nyhan says.

“In the past, if you were going to do a survey experiment, you would need to contract with a firm to dial 500 people’s home telephones and interview them, or try to recruit them in some public place. It was labor intensive, slow, and expensive. Now we can collect data quickly and cheaply, which allows for a large number of experiments,” he says.

This emerging subfield of quantitative social science is attracting a growing number of students and is a central element of most of Nyhan’s courses. Student-assisted survey experiments from many classes, led by Nyhan and his colleagues, have added to the current body of social science academic research.

The Upshot column highlighted recent research into Facebook’s decision to label false stories as “disputed.” The research, co-authored by 16 undergraduates from Nyhan’s 2017 “Experiments in Politics” seminar, found that “disputed” tags on Facebook news have a small effect on readers’ perceptions of accuracy, but that a “false” banner (which has not been adopted by the social media platform) produces greater skepticism among readers.

In the Monkey Cage post Nyhan and Horiuchi discuss two experiments investigating public perceptions of false stories. The first study, conducted by Horiuchi and three undergraduates, found that the media source—Fox News versus CNN, for example—did not play a significant role in people’s perception of the trustworthiness of an article. But the average time these readers spent reading a fake—and presumably more novel—news story was higher than the time spent on a true story, regardless of the source.

The second study discussed in the Monkey Cage looked at the effectiveness of fact checking. The paper, co-authored by Nyhan and 15 undergraduates from his 2016 “Experiments in Politics” seminar, found that fact-checking individual statements by politicians had little effect on people’s beliefs about the truthfulness of those statements. However, summary fact checking—looking at the overall truthfulness rating of a given politician—does influence public perceptions, suggesting a means of holding politicians accountable for misstatements, Nyhan and the students wrote.

Nyhan’s fluency in writing for the popular media—as a Times columnist, as a frequent commentator for podcasts and the WNYC radio show On the Media, as a blogger, and as a social media figure—in addition to his work as a researcher and author of academic works, illustrates the widening platform available to scholars today.

“There have always been academics who cross over into the public sphere, but I would say during my career it’s become widely accepted in political science to share your findings publicly. That wasn’t true as recently as a couple of decades ago,” Nyhan says.

He stresses to his students the importance of being able to communicate clearly in a range of styles.

“One of the most important things we can teach in a liberal arts education is how to be an effective writer,” he says. “I’ve found that writing for academic and popular audiences has made me a better writer in both formats. I tell my students that writing in both formats has made me faster, and hopefully clearer and more precise. I stress to them that you can’t become a better writer unless you write and write and write.”

But the central goal of the work is not about style or perceptions, he says. It is about understanding the principles and institutions of democracy and viewing the political process in this context. This conviction led Nyhan to join government professor John Carey, University of Rochester political science professor Gretchen Helmke, and Yale political science professor Susan Stokes in founding the website Bright Line Watch, dedicated to monitoring the state of U.S. democracy.

The site, which is supported by the Democracy Fund, the William and Flora Hewlett Foundation, and the Yale Macmillan Center, presents this mission statement: “One of the greatest threats to democracy is the idea that it is unassailable.”

This is why it is essential that work in the academy become part of current public debate, Nyhan says. “We should demonstrate the contribution of our research. A lot of resources are devoted to providing us with these incredibly privileged positions, and we need to show the intellectual payoff that comes from that work. I think we can help inform the journalistic and public conversations about how our political system works, how democracy works, and bring our research to all sorts of related questions that were impoverished by the lack of academic engagement in the past.”

That said, it is also necessary to balance the urgency of current events with a longer academic perspective, he says. “What I think the best social science does is bridge those two sets of concerns. It has immediate relevance to problems in the world but also speaks to important intellectual questions about social and political behavior. If we have both of those, I think now you have the ingredients for important work.”