Professor Deborah Nichols will chair a search committee to find the permanent provost. 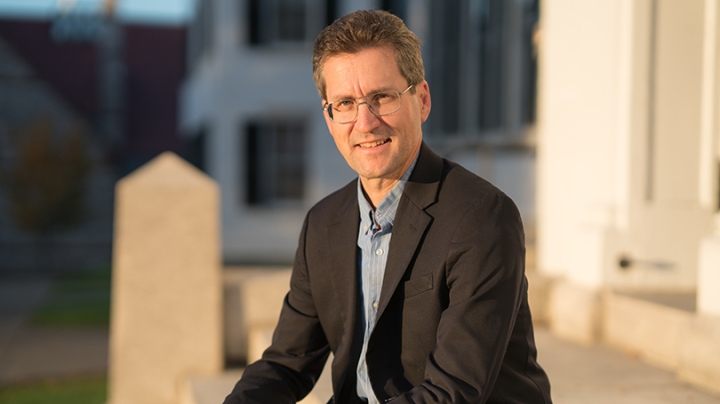 David Kotz ’86, the Champion International Professor in the Department of Computer Science, will serve as Dartmouth’s interim provost. (Photo by Eli Burakian ’00)
11/05/2017
Body

President Hanlon also announced the appointment of a search committee to begin work to fill the permanent provost position. The committee, to be chaired by Professor Deborah Nichols, will begin work this week.

In appointing Kotz to the interim role, Hanlon said, “David’s record as an eminent scholar and teacher, his research leadership, and his six years as associate dean of the faculty for the sciences make him the ideal choice for the interim post.”

Kotz, whose research interests include computer security and privacy, computing in the field of health care, and wireless networks, frequently collaborates with faculty and students across the arts and sciences divisions, at the Geisel School of Medicine, Thayer School of Engineering, Tuck School of Business, and Dartmouth-Hitchcock Medical Center.

“I’m looking forward to working as part of the senior leadership team, on behalf of the Dartmouth faculty, staff, and students, and its many outstanding academic programs,” Kotz said.

Last month, Carolyn Dever, who has served as Dartmouth’s provost since 2014, announced that she would step down from the role and return to research and teaching. Her last day as provost is Nov. 22, the end of fall term.

The provost, who reports to the president, is charged with elevating the academic profile of the institution and, in consultation with the academic deans, is directly responsible for supporting and advancing the teaching and scholarship of Dartmouth faculties and schools. In addition, the provost is responsible for supporting and advancing all student-related programs; has significant fiscal oversight; and works closely with the executive vice president to manage the College’s academic budget.

The committee will work with a search firm that has yet to be selected. The group is charged with sending recommendations to Hanlon in early spring.

In addition to his time as an associate dean, Kotz has chaired Dartmouth’s Science Divisional Council and the Dartmouth Centers Forum, and served as executive director of the College’s Institute for Security Technology Studies. He has taught more than a dozen different courses and mentored over 100 undergraduate, graduate, and postdoctoral researchers in his 26 years on the Dartmouth faculty.

Kotz has published more than 130 refereed scientific papers and obtained over $65 million in grant funding. He is currently the principal investigator on three large grants from the National Science Foundation and co-leads the Dartmouth Center for Technology and Behavioral Health.

An avid hiker, photographer, and outdoorsman, Kotz was active in the Dartmouth Outing Club as a student and continues to be involved in Dartmouth’s outdoor programs. He lives in Lyme, N.H., with his wife, pediatrician and researcher Pamela Jenkins ADV ’99, and their three children.