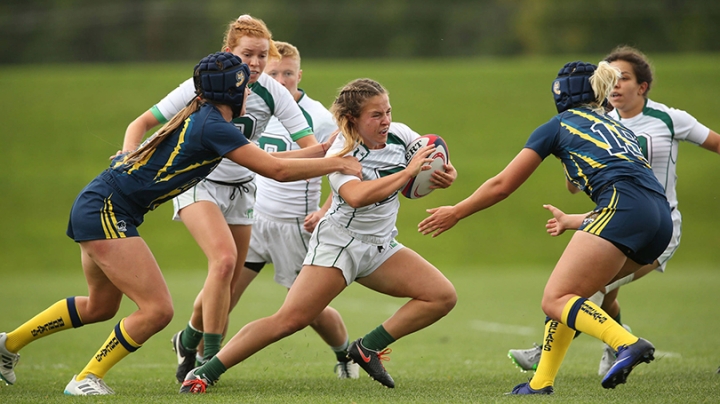 Center Lilly Durbin ’21 led Dartmouth in two tries against No. 2 Quinnipiac at the NIRA National Championships on Nov. 19. (Photo by John and Matt Risley)
11/20/2017
Body

A warm fall in Hanover led to hot results on the field for Dartmouth athletics teams, with two teams qualifying for NCAA championships, another making it to the national title game, and the football team in the chase up to the very last moments for another Ivy League crown.

Senior midfielder Matt Danilack ’18 vies for the ball. The Rockville, Maryland native scored the only goal in the Nov. 11 win over Brown. (Photo by John and Matt Risley)

One of the Big Green’s most successful teams of the past two decades, the men’s soccer team won its fourth straight Ivy League title with a 6-0-1 record in conference play and a 12-3-1 mark overall. Dartmouth recorded nine shutouts with rookie Christopher Palacios ’21 minding the net, while Eduvie Ikoba ’19 and Matt Danilack ’18 led the offense with a combined 14 goals. The Big Green, which advanced to the NCAA Tournament for the 11th time in the past 14 years, earned a first-round bye for just the second time.

The season came to an end on Nov. 19 at home against New Hampshire following 110 minutes of scoreless soccer ending in a shootout won by the Wildcats in the second round of the NCAA tournament. Dartmouth ended its season 12-3-2. While the game technically ended in a tie for each team, in the soccer postseason, teams cannot play to a draw, and must go into a sudden-death, penalty kick, shootout. The Wildcats made four of their attempts while the Big Green made only one, giving the advance to New Hampshire.

The women’s cross country team made a strong push to win the Ivy League Heptagonal Championship, but eventually settled for second place with Olivia Lantz ’19 pacing the squad with a fifth-place finish to garner a spot on the All-Ivy League First Team. Julia Stevenson ’20 and Ella Ketchum ’21 both earned second-team honors, placing 11th and 13th, respectively, as the Big Green qualified for the NCAA Northeast Regionals.

They performed even better there, placing second with Stevenson leading the charge to advance to the NCAA Championship on Nov. 18 in Louisville, Ky., where the team finished 29th, with Lantz leading the Big Green runners in 135th place (out of 255).

Since opening the fall by knocking off Quinnipiac, the defending National Intercollegiate Rugby Association (NIRA) champion, the Big Green women steamrolled their way through their schedule behind the play of Frankie Sands ’18 and Lilly Durbin ’21. At the end of October, Dartmouth won its third Ivy rugby crown in as many years as a varsity program with a 22-8 victory over Harvard.

On Nov. 11, the top-ranked Dartmouth women’s rugby plowed through American International in the NIRA quarterfinals, 80-12, to advance to the semis in Hamden, Ct. In the Nov. 19 NIRA semifinal, Dartmouth edged No. 5 Harvard, 17-12, advancing to the national championship for the first time in program history. The top-ranked Dartmouth team fell to No. 2 Quinnipiac 29-20 at the NIRA Championships in Hamden, closing out their 2017 season with a record of 8-1, their best mark since making the jump to varsity status in 2015.

Heart-stopping comebacks played a large role in the football team’s season, including the final game, at home against Princeton. Trailing by three points with one second showing on the clock, Jared Gerbino ’20 broke the goal line from 2 yards out for his fourth rushing touchdown of the day, lifting Dartmouth (8-2, 5-2 Ivy) to a 54-44 victory over Princeton (5-5, 2-5 Ivy) on Nov. 18 at Memorial Field. The Big Green finished in second place in the Ivy League. The team’s shot at a 19th Ivy title slipped away when Harvard fell to Yale 3-24, giving the Bulldogs sole ownership of the Ivy crown.

Earlier in the season, the Big Green surprised the Bulldogs before a thrilled homecoming crowd at Memorial Field, rallying from 21 points down against Yale for a 28-27 triumph, the largest deficit ever overcome by the Big Green in a victory.

Volleyball got to play the role of spoiler at the end of the year, sweeping Penn and Princeton on the final weekend of action. That kept the Tigers from winning the Ivy League title outright, forcing them to a playoff game against Yale as Dartmouth came in sixth in the conference standings.

The field hockey team picked up wins over Brown and Columbia to help Dartmouth tie for sixth. Katie Spanos ’20 stepped up her game in her second year, earning a spot on the All-Ivy League Second Team for leading the Big Green in goals, assists and points.

Women’s soccer ended the year on a high note with a 1-0 triumph over Cornell. Among those receiving postseason recognition were Brittany Champagne ’18 and Remy Borinsky ’19 on the All-Ivy League First Team, and speedster Erin Kawakami ’21—who scored the game winner against the Big Red—on the Second Team.

The men’s cross country team finished the year with a strong showing at the NCAA Northeast Regional, placing 13th out of the 37 teams competing. That came on the heels of taking fifth at the Ivy League Heps Championship with Will Shafer ’18 the top Big Green finisher in 19th.

Written by
Rick Bender
Share this
FacebookTwitterEmail
In the News