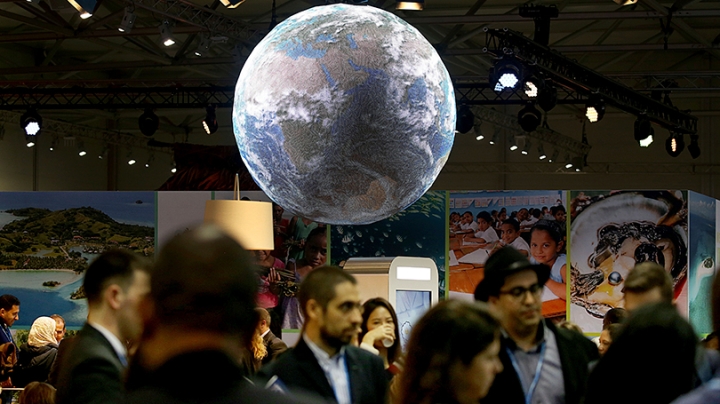 A globe can be seen inside the German pavilion at the World Climate Conference in Bonn, Germany, on Nov. 6. (Photo courtesy of AP)
11/15/2017
Body

Jonathan Winter, an assistant professor of geography, is attending the United Nations climate change conference in Bonn, Germany, this week as part of the American Association of Geographers observer delegation.

Delegates from 195 countries and up to 25,000 people representing organizations, advocacy groups, academic institutions, local and regional governments, and the media gathered in Bonn from Nov. 6 through 17 to work out a “rule book” for implementation of the Paris agreement.

Winter says the gathering, known as the 23rd Conference of Parties, or COP23, actually involves multiple conferences focused on negotiating different aspects of the United Nations Framework Convention on Climate Change, most recently expanded in Paris in 2016. The international meeting also includes an area for side events, meetings, exhibits, and country pavilions for interested parties who are not part of the official negotiations.

“COP23, to me, is essentially where the rubber meets the road. Countries are grappling with designing the rules, guidelines, and procedures to bring the Paris agreement into force,” says Winter. “I think that all countries and bodies are also grappling with the fundamental shift in the role of the United States after the Trump Administration’s threat to pull out.”

Winter has observed several high-level official negotiation sessions in Bonn, including those of the Subsidiary Body for Implementation, which is negotiating the rules and procedures by which countries will implement the Paris agreement, and the Ad Hoc Working Group on the Paris Agreement, established to prepare for the entry into force of the climate accord.

“The U.S. is now isolated in the world on the issue of climate change. Syria, the last functioning country that was not part of the Paris agreement, officially signed on Tuesday,” he says. “The high-level talks began Nov. 15 with remarks by heads of state, and some, though not criticizing the United States by name, referred to increasing their resolve despite one nation’s threats to exit.”

Winter has also participated in side discussions involving speakers from academia, industry, and developing countries, on topics such as reducing food waste, expanding rural transportation infrastructure, rainwater harvesting, and financial incentives to promote sequestration of carbon in soils for farmers.

Other Dartmouth-connected participants in the global climate debate surrounding COP23 include actress Connie Britton ’89, a good-will ambassador for the UN Development Program, who wrote in The Boston Globe Tuesday that world leaders at the climate conference should “embrace the tenacity, spirit, and energy of women to promote more effective climate actions across the globe.”

In addition, Laura Ogden, an associate professor of anthropology, and Richard Holmes, a professor emeritus of biology, were signatories on the “World Scientists’ Warning to Humanity: Second Notice,” a call for action to avert irreversible environmental damage to the planet. More than 15,000 scientists from 184 countries signed the letter, which was published in Monday’s edition of the journal Bioscience.