The win secured the men’s soccer team a berth in the NCAA Tournament. 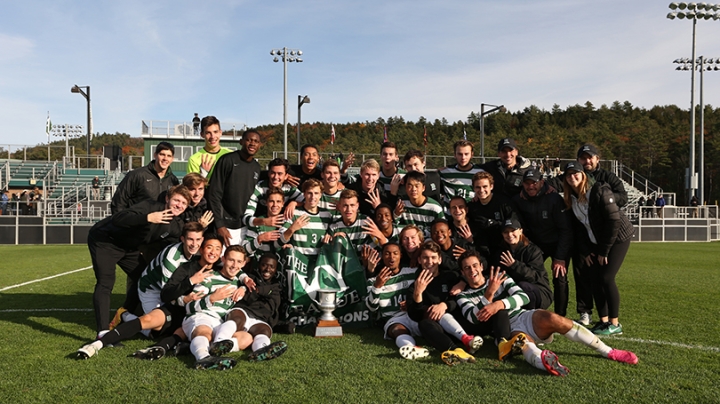 The team poses for a celebratory photo after clinching its fourth straight Ivy title. (Photo by John and Matt Risley)
11/07/2017
Body

The No. 19 Dartmouth men’s soccer team completed its seventh shutout of the season in a 1-0 win over Cornell on Nov. 4.

“I’m obviously very proud of the group, in a lot of ways it was like a cup final for us,” said head coach Chad Riley. “There were a lot of nerves at the beginning, and credit to Cornell that they really pushed us very well. We had some chances that didn’t quite break through in the first half but Cornell had some plays around our box that we defended well.

“We knew in the second half we had 45 minutes to put some pressure on them and try to get the goal, and we started well, were a little bit more purposeful with our play, and that was a great cross by Dawson (McCartney ’21) met by Eduvie (Ikoba ’19) to get the goal. Cornell kind of threw a lot at us the last 15 minutes and I thought we handled that well, showed a lot of maturity.”