Foreign Study Programs are partnering with a nonprofit to link to local schools. 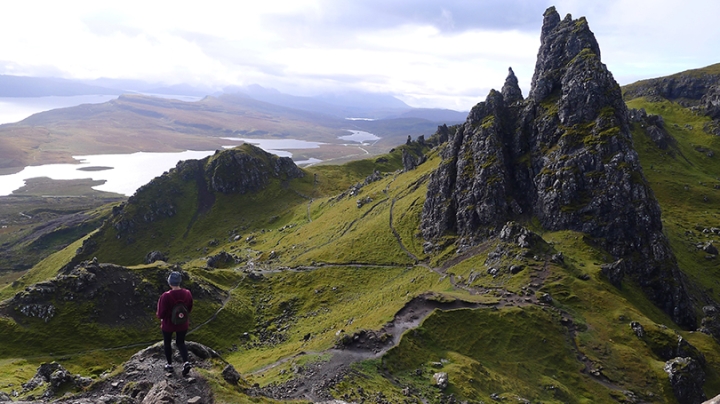 Early this fall, when Debora Hyemin Han ’20 set out for Edinburgh, Scotland, for her Foreign Study Program (FSP), she agreed to take 20 second-graders along. The children aren’t actually traveling with her, of course. They are tracking her journey by reading her blog posts and occasionally talking with her over Skype from their classroom at the Dothan Brook School in Hartford, Vt.

The school collaborates with Dartmouth FSPs through the auspices of Reach the World, a nonprofit co-founded by Dartmouth alumna Heather Halstead ’97. After graduation, Halstead and five other young educators took a highly publicized two-year sailing trip around the globe, sharing the adventure with thousands of classrooms in underserved communities using satellite communication.

“That’s where it all began, and Dartmouth was really helpful from the start, with seed money and advice,” says Halstead. Over the past two decades, Reach the World has evolved from operating global journeys to connecting volunteer travelers with a nationwide network of K-12 schools. Dartmouth is the first college to partner with the program.

Children at the Dothan Brook School in Hartford, Vt., talk with Debora Hyeman Han ’20 via Skype. (Photo by Charlotte Albright)

On a recent chilly afternoon, Han, wearing a warm hat and sweater, answered questions posed by the Dothan Brook students and their teacher, Tara MacCallum, via Skype. Han was in her Edinburgh apartment, which, she explained, is called a “flat” in Scotland.

“Do people have pets there?” the students wanted to know.

“We can’t have them in our flat, but you see lots of dogs here, especially collies,” Han replied. “Do any of you have collies?” A few hands shot up.

“There’s no such thing as a French fry here, unless you go to McDonald’s,” Han told her attentive audience. “Here they are called chips. Or maybe wedges, if they are thicker.” And, she explained, Scots eat something called haggis. “It’s a sheep’s insides made into a kind of meatball thing. It may sound a little icky, and that’s what I thought, too, so I pushed off trying it. But then, when I tasted it, it was actually pretty good.”

Han also shared a few Scottish colloquialisms. “If they want to say, ‘something is great,’ they say, ‘well decent.’ Like, I love that show, it’s ‘well decent.’ ”

Conversations like these, MacCallum says, have shown her students that people from other countries are like them in some ways, and unlike them in others. By sharing her experiences abroad, Han has also spurred creative lesson planning. For example, the Dothan Brook class has been making maps of Scotland.

“We also made charts and graphs of the weather Debora has been talking about and compared it to the weather we’ve been having,” says MacCallum. The virtual exchange, she says, has opened her students’ eyes to the possibility of travel far from home when they get older. “We take lots of field trips around the Upper Valley, and they see Debora’s time in Scotland as just a bigger field trip, well worth taking, at some point.”

While studying philosophy at the University of Edinburgh, Han has written articles and journal entries twice a week for the Dothan Brook classroom, including photo albums and videos.

“I hope students will see that there is a rich reserve of knowledge and understanding to be found in the world outside their own, and feel a yearning to explore it for themselves. And I hope it will be the first step in their journey to becoming active members of the global community,” she says.

Teaching younger people about Scottish culture has also made Han think deeply about her own off-campus learning.

“Creating content for a second-grade audience has pushed me to consider what is most relevant for nurturing budding perspectives on global outlook,” says Han. “Because it must be expressed in a way that is understandable and meaningful to them, I have done a lot of self-reflection about the core of each of my experiences before curating or writing content. This has not only taught me about how to approach younger childhood education, but has also prompted me to think more critically and deeply about my time abroad.”

About Reach the World, Halstead says “developing strong roots of global engagement in rural places, where there may not be a lot of cross-cultural interaction or influence, is a really important mission for our nation to undertake in great seriousness right now. Virtual exchanges are very personal; they meet students where they are, and give them human currency to use against a tide of anti-global sentiment rising in our nation.”