“It feels like a room where you would find Jane Austen,” says Emma Hobday ’19. 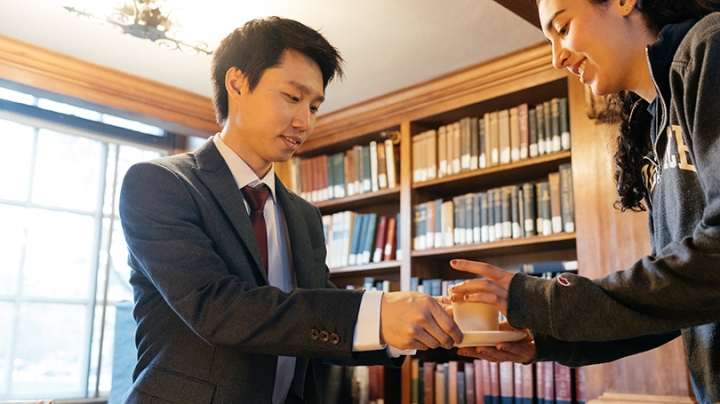 Wander into Sanborn House Library any weekday between 4 and 5 p.m., and you’re likely to see people drinking cups of hot, freshly made loose-leaf tea as they read or work on computers. A student server at the wooden desk in the front of the room (who, on special occasions, wears a white shirt and black tie) pours from a white ceramic teapot. The tea is free. Cookies are offered in exchange for small donations dropped into a glass jar next to the tea tray.

“Sanborn House was built to honor Edwin David Sanborn, Class of 1832, an English professor so devoted to his students that he would invite them to his house every afternoon to have tea and share the books in his library,” says Donald Pease, the Ted and Helen Geisel Third Century Professor in the Humanities. “His son, Edwin Webster Sanborn, Class of 1878, left a legacy to Dartmouth College, asking that a College library be built and that tea be served every day, as it was in his father’s study.

“It’s a wonderful story about a permanent commemoration of a Dartmouth English teacher, adding to the College the warmth and conviviality that Sanborn knew his own family home held for students.”

When Pease joined the English department faculty in 1973, professors were expected to attend tea along with their students each day, “because it was the place where you could build the morale of your students and deepen collegiality.”

These days, afternoon tea is voluntary. “The benefit of lifting the requirement is that faculty who are there really want to be present. But what I liked about the mandate was the rich sense of history that we all shared, working and studying in that space,” says Pease, who still occasionally drops by for afternoon tea.

Herbert Chang ’18 has been serving tea in Sanborn House for almost four years. He and the two other current servers, Jennifer Kuo ’18 and Julia Bonzanini ’21, follow a daily routine that hasn’t changed much since the ritual began in the 1930s.

“I get to Sanborn at about 3:30, sign in, pick up the key to the tea cabinet, put the cups, saucers, and teapot on the serving tray, cut up lemons, pour milk into a small jug, heat the water, and steep the tea for five minutes,” says Chang. “It’s almost always Twinings. Often Earl Gray.”

One of Chang’s favorite parts of the job is meeting alumni who drop by and reminisce about their time at Dartmouth. “At homecoming my sophomore year, a couple came in with their two daughters—very small and very cute—and they told me they met right here, drinking tea,” Chang says.

On a late October afternoon, Charles Gagné and his niece, Emma Hobday ’19, carried their teacups to a library table in the center of the room. It’s a family tradition. “My mother, Katharine Gagné, graduated in 1989, and she came here for tea almost every day,” said Hobday. “I love it here. It feels like a room where you would find Jane Austen.”

“My late brother, Rick Gagné ’83, was a tea server,” said Gagné,  “and I remember him telling me about a chipmunk that occasionally scurried about the place. They named him Archway, after the cookies they served.”

At a nearby table, also enjoying tea, sat Alison Flint ’15, who was an English and economics major and now works in a lab at Thayer School of Engineering. On her saucer was half a ginger snap.

“Sanborn Library is one of my favorite places on campus,” she said. “I absolutely love it. It’s magical.”

Outside the stately French doors facing the Green, dusk was approaching, and a chill wind was picking up.

Flint took a sip, saying, “A cold afternoon just begs for a cup of tea in a quaintly lit room.”